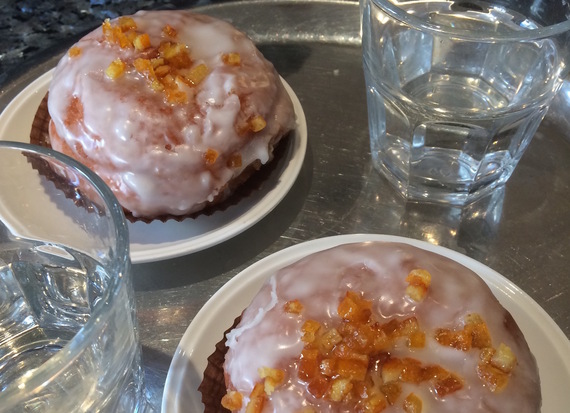 When I got the invitation to join a culinary tour in Poland, organized by the Adam Mickiewicz Institute and led by local expert Monika Kucia, I accepted immediately. I must admit that my knowledge of Polish cuisine was limited to the few mainstays I had grown used to in the stores and eateries of the East Village and Brooklyn: pierogis, kielbasas, barszcz (often and less intimidatingly spelled borscht). Precisely for this reason, I immediately jumped on the opportunity to visit Warsaw and Lublin, as well as its surrounding province of Lubelskie.
I did not really know what to expect. My previous trip to Poland, almost 10 years ago, had been limited to Krakow, where I had paid limited attention to what I was eating and focused instead on monuments, history, the salt mines and the horrors of Auschwitz. I now realize that, at the time, the present day renaissance of Polish gastronomy was just timidly starting. Now it's getting stronger and more expansive, although still limited to a relatively small segment of the population. The interest of the general public in food is mainly reflected in the success of the local version of Top Chef, the presence of Starbucks and other chains, as well as the multiplication of generic Italian restaurants and pizzerias, which local anthropologist Mateusz Halawa described to me as "aspirational Western normality" for the middle class.
But that is changing, and quickly. In Warsaw, the restaurant Sardynia is offering regional specialties from Sardinia, specifying on the menu that all the ingredients are imported from the island. The stores Piccola Italia boast an interesting selection of products from Italy and the Mediterranean: it may be no Eataly, but it shows a growing attention among consumers about their purchases. Restaurants such as Opasły Tom and Concept13 in Warsaw explore local ingredients to reinterpret them in creative ways to satisfy the small but growing public of local cosmopolitan consumers that want to experience what their peers do in places like New York or London.
Such attention to ingredients, dishes, and techniques from various regions of Poland is also evident in the attempt of restaurants such as Zielony Talerzyk and Perłowa Beer House in Lublin, as well as Solec 44 in Warsaw, to establish direct connections with purveyors that are striving to bring back good quality produce, often working on disappearing crops and animal breeds. It is not surprising that these restaurants are associated with Slow Food, the international organization that closely expresses the desire for good, fair and clean food, while considering consumption as a social, if not political act.
The manifestations of this renewed interest in food are visible also in the launch of continuing education classes in culinary culture at the Warsaw University and the success of food festival such as the ones in Poznan and, more recently, in Lublin, to which I had the opportunity to participate. There, the European Taste Festival, organized by local food expert Waldemar Sulisz, saw the participation of producers from all over the country, some of them entering their specialties into contests that, although small, were extremely felt by the participants, also due to the presence of big national figures such as the renowned food critic and TV celebrity Robert Makłowicz.
Besides these most mainstream expressions of a growing interest in food, in urban centers the recognizable marks of what the above-mentioned Halawa labels as the "global Brooklyn" are quite visible: little coffee shops with menus written on blackboards, bars with a large choice of craft beers, ironically retro soft drinks like Fritz-kola. However, daily foodways of the great majority of the Polish does not appear to have completely changed: great pączki (a pączek is a pastry similar to a donut) are still available at the classic Blikle in Warsaw; when in season, plums are stewed for days into the delicious powidła preserve, as they were before; milk bars, a leftover of socialist times, continue to provide simple dishes and staples at extremely affordable prices. Of course, redesigned and cooler versions of such bars are also opening, although the food is more expensive; they may signal that the younger generations are removed enough from the past that they are ready to reinterpret it and make it theirs.
I am still making sense of all I experienced: in the next few weeks I will zoom in on specific aspects and dynamics. I do not pretend I fully understand what's happening in Poland--that would take much longer than eight days. But I will try to share