When I was 6 years old, I talked my parents into buying me a pair of moccasins so I could pretend I was an Indian warrior. Unfortunately, the moccasins offered little protection when I did my war dance over a broken Michelob bottle. I was more upset about my ruined moccasin than my cut foot.

My mother cooked up a batch of chicken noodle soup, just the way I liked it, heavy on the noodles, light on the soup.

"Have some soup, and know your mother loves you."

When I scraped my knees trying to ski down our back alley with my feet taped to strips of aluminum siding (don't ask), the pain was assuaged by Mom's spaghetti and turkey meatballs.

"Eat this, and know your mother loves you," she cooed. By my second meatball, I had all but forgotten the boo boos.

The message was clear: Food is love.

If food was love, my stoic, WWII vet father loved himself a lot. I tried to grab a bit of tangerine off his plate one day and almost lost a finger.

He was a man of few words, but one of them was "more," which he almost always said at meal times. He had one full sentence: "Shut up, or I'll crack you one." Let's say we weren't close.

A month after my mother died, my father and I became fast friends. It was surreal to find myself hanging out with a man I'd never really known. We ate fried flounder and french fries near the ocean and talked about the sea gulls stealing everyone's food. He said entire sentences that had nothing to do with cracking anyone.

"What a pig!" my father said throwing a french fry at the gull.

My tough-guy dad seemed to have died along with my mother. A softer, gray-haired man who loved to feed birds took his place.

But three months after my mother died, my father met Natalie at a Jewish Senior Citizens party in San Diego.

"She'd not much to look at, but she's good company," was my dad's only comment when he broke the news to my sister, brother and me.

Natalie felt threatened by the memory of my mother and so abolished all talk of her while she was around. My mother's photos were put away, as well. We figured we'd talk to my dad about mom when Natalie wasn't around, but Natalie forbid my father to be alone with any of his children. It went on like this for 15 years.

My brother's wife Dela figured out a way to warm my father's heart. She cooked for him. Matzo ball soup was his favorite. He'd make the trip from San Diego to Los Angeles just to get Dela's schnitzel or matzo ball soup. But he never came without Natalie.

On a visit to see Dad in San Diego while Natalie was in the bathroom, my father pulled out his wallet and showed me a picture of my mother when she was young and beautiful.

"My beautiful wife. I could do no wrong in her eyes."

" I think about her every day."

He quickly put his wallet away when Natalie came out.

When my father was 83 years old, I told him that I wouldn't visit him anymore if he wouldn't spend time alone with me.

"I'm an old man; give me another chance."

He picked me up at my hotel, sans Natalie. We went to Anthony's on the Bay in San Diego and ate flounder.

Jews love flounder. It's a thing.

Dad admitted to me that he was unhappy with Natalie but too old and tired to do anything about it.

He put a shopping bag filled with mail on the table.

"Can you help me go through this?"

From that point on, I would fly in from New York to San Diego. We'd eat flounder, and I would help him go through his mail and pay his bills.

We went on a health kick and ordered the flounder broiled not fried with cole slaw instead of fries. It wasn't gourmet, but the fish was fresh and the bay was beautiful. Dad didn't use salt due to high blood pressure, so I squeezed lemon on his fish and dusted it with pepper.

"Thank you," Dad said, eyes twinkling, and devoured his meal.

"Dad, every once in a while you have to chew," I said laughing. I took my napkins and wiped the cole slaw dripping down his chin.

One morning while Natalie was in a rehab center recovering from a fall, Dad fell in the shower. He couldn't find the strength to climb out of the tub, so he curled into a ball and went to sleep. He stayed like that for 24 hours before Natalie's daughter found him.

By the time he got to the hospital, he had hypothermia. I flew out from New York City and sat by his bed.

On what felt like a race against time, I tried to find out a little more about this man who shared so little of himself.

"Tell me about your childhood, Dad."

I decided to try something new. It occurred to me that my father didn't know much about me either.

I'd become a chef and the owner of a catering company in New York City. The road to get there had been wild and rocky. Every day for the next two weeks, I sat by his bed, fed him from his hospital tray and told him about his daughter.

"When I first started cooking women weren't welcome in the kitchen. I had to dip 3,000 strawberries in chocolate."

"Three thousand! How did you do that?"

"I'm starting to think so."

"Tell me another story!" he demanded.

"The first party I catered was for 50 people, but I didn't know how to order food, so I came with enough cold cuts for 150. I made a mountain out of cold cuts."

"That's nothing dad. I was catering a wedding for 150 people when I got the call about your fall. "

"Wow," he said, shaking his head wide-eyed. "One hundred and fifty people! That's a lot!"

From that point on, my father would call me every day, sometimes 10 times a day.

"How many people you cooking for today?"

I moved Dad into an assisted living home with full nursing. Over the next five years I visited him almost every other month.

Every time I walked into his room I was armed with his favorite treats: kosher hot dogs slathered in mustard and a double pile of sauerkraut (just the way he liked it) or Chinese vegetable egg rolls.

My father would cheer.

"There's my beautiful daughter who never forgets me!"

I had to start cutting the hot dogs into 4 pieces. Otherwise, he would down them in one bite. I never met anyone else who could do that.

Mustard and sauerkraut dripping down his chin, mouth full of hot dog goop, my father still managed to ask, "How many you cooking for now?"

"Dad, next week is a big week: two weddings and a bar mitzvah. All together, 500 people!"

When a nurse walked in to check his blood pressure, dad yelled, "My daughter is cooking for 500 people. She's a big shot!"

"Just like her father," said the nurse winking at me.

"Can I have another hot dog?"

"Dad. You have to save room. I brought you your favorite dessert. Apple pie!'

As I spoon-fed him the pie, I pet his cheek, freshly shaved by the nurse. He was so happy, he was humming.

Out of my mouth tumbled, "Have some apple pie, Daddy, and know your daughter loves you." 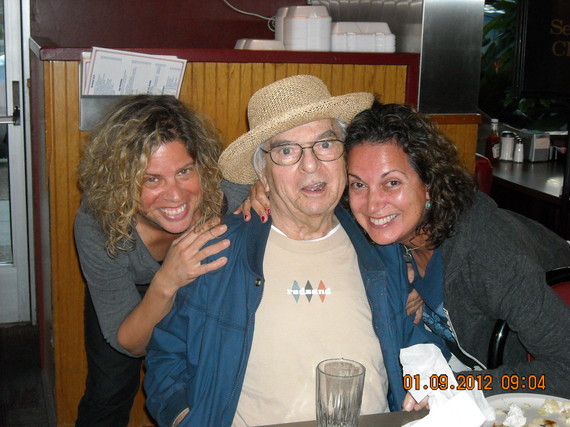 More:
Parentsfather-daughter relationshipsDaddy-Daughter
Newsletter Sign Up
Raise the kind of person you'd like to know
Subscribe to our parenting newsletter.
Successfully Subscribed!
Realness delivered to your inbox