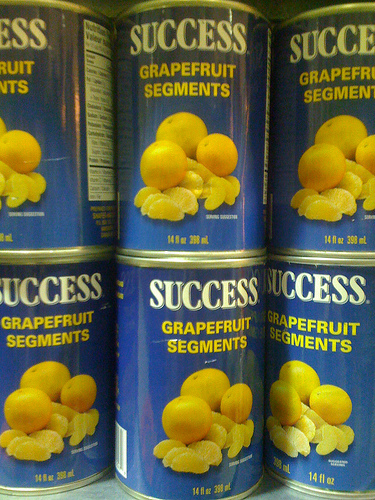 Traffic lights: not just for on ramps and high school pranks anymore! (Oh the fun you could have with a traffic light, some "borrowed" construction signage and a bra. Or so I've heard. Ahem.) The red, yellow, and green may be coming to a table near you, and I'm not talking about bell peppers. Mark Bittman, the food writer for the New York Times who popularized the "vegan until 6 p.m." diet plan, is proposing a new way to label foods so that all consumers need to do is take a quick glance at the package -- green is rockstar, yellow is sketchy, and red is the color of the lining of your casket (and also the Little Debbie logo, coincidence?) -- to make an informed decision about their health.

At first glance, this sounds great to me. I'm more swayed by food labeling than I'd like to admit, and it would be nice to have it working in my favor for a change. True story: I recently purchased Booberry cereal for my kids because a) it's a Halloween institution that I grew up on b) my kids are champion whiners/I am mentally weak and c) the label said it had "40 mg of vitamin D." You guys. I bought a box of Sugar Bombs because it had the weeniest amount of a vitamin I could get my kids for free by throwing the box out the back door on a sunny day and yelling "fetch." The new labels aim to correct this -- instead of being evil marketing smoke and mirrors, they would instead be written by The Committee For The Greater Good Who Are Also Immune To Lobbyists, ostensibly with consumers', er, bottom lines in mind rather than those of Food Inc.

Bittman put a lot of thought into what makes a food "healthy" and what information would be valuable to know from a food label. He describes it:

"Every packaged food label would feature a color-coded bar with a 15-point scale so that almost instantly the consumer could determine whether the product's overall rating fell between 11 and 15 (green), 6 and 10 (yellow) or 0 and 5 (red). This alone could be enough for a fair snap decision. (We've also got a box to indicate the presence or absence of G.M.O.'s.)

We arrive at the score by rating three key factors, each of which comprises numerous subfactors. The first is the obvious "Nutrition," about which little needs to be said. High sugar, trans fats, the presence of micronutrients and fiber, and so on would all be taken into account. Thus soda would rate a zero and frozen broccoli might rate a five. (It's hard to imagine labeling fresh vegetables.)

The second is "Foodness." This assesses just how close the product is to real food. White bread made with bleached flour, yeast conditioners and preservatives would get a zero or one; so would soda; a candy bar high in sugar but made with real ingredients would presumably score low on nutrition but could get a higher score on "foodness"; here, frozen broccoli would rate a four.

The third is the broadest (and trickiest); we're calling it "Welfare." This would include the treatment of workers, animals and the earth. Are workers treated like animals? Are animals produced like widgets? Is environmental damage significant? If the answer to those three questions is "yes" -- as it might be, for example, with industrially produced chickens -- then the score would be zero, or close to it. If the labor force is treated fairly and animals well, and waste is insignificant or recycled, the score would be higher.

(You can see some nifty examples here.)

First, huge props for considering the state of the food and where it came from in addition to the actual nutrients. That's a distinction that needs to be considered more often. But he lost me at this: "The first is the obvious 'Nutrition,' about which little needs to be said." Whoa, now. Actually lots needs to be said about nutrition. Take dairy, for instance. If you're vegan (like Bittman is at least 50 percent of the time), dairy isn't even considered edible -- definitely a red light. If you follow the USDA party line, then low-fat cheese and skim milk would be green. Yet if you're a scientist or someone who just likes to read science-y stuff then low-fat dairy is an abomination (a yellow? 'Cause it's not as bad as Flaming Hot Cheetos?) and full-fat dairy in its as-close-to-cow-juice-form-as-possible state is optimal. So who gets to decide what color gets slapped on a package of cheese curds? And I really hope the answer is not the government. Basically the only foods everyone can agree on are veggies, and even then not all of them make the cut (poor maligned white potatoes!).

Then there's the whole "Nanny State" conundrum. I went into this assuming that a lot of people (most?) really don't know what "healthy food" is and need the instruction. And I say that because for most of my life I had basically no clue what healthy was. I grew up like most kids in my generation on white bread, EZ cheez and the miracle of Hot Pockets that you could microwave and still get a crispy shell. My family's only foray into local eating was when my dad decided he needed to shoot a deer -- just once, to see if he could -- and then hung it up under our deck for me to walk blindly into in the middle of the night while I was trying to sneak in after curfew. (Probably after chucking my bra over a traffic light. Pretty sure I screamed so loudly the deer was temporarily reanimated just to get away from me. That'll teach me to come home late!) He made the venison into jerky. After his technique was proved questionable by the appearance of green mold, he put it in the freezer and every few months someone would gamely (hah!) try to gnaw on a piece. For all I know, my parents still have 400 pounds of dead deer from 1996 in their freezer.

After that it was on to eating disorder la la land and I became obsessed (seriously obsessed) with counting fat grams and then later calories, sugar, serving sizes and the number of IQ points I lost every time I fainted. I jest, but I was so seriously out of touch with what "healthy" food was that I thought fat-free microwave popcorn and SweeTarts made up the ideal post-gymnastics refuel. I lived for years on GMO corn popped in a bag doused in carcinogenic chemicals and artificially-colored sugar in the shape of bunnies and ducks! Granted, not everyone is as insane as I was (am), but I remember when I first started reading up on nutrition, during my pregnancy with my second son, being completely amazed at how vital protein was. At the time I was a vegetarian and thought I had a healthy diet, but learning the basics of healthy fats (hint: anything called zero-calorie butter spray has neither zero calories nor butter), clean proteins and whole carbs was revolutionary for me.

But proving again that my friends are generally always smarter than me (and I say that with not a trace of snark, they really are), when I posted about the new food labels on Facebook I got several comments like this one:

"The assumption that people do not know what is healthy is a false premise, it is likely the same crowd that are trying to get skull and cross bones on cigarettes. Consumers are aware of what is healthy, many just choose not do it. There is not a labeling system in the world that will prevent people from making bad choices."

" it would be preaching to the choir. it would make it easier for those of us who care but not draw in those people who should becaring more. Govt agencies should spend more of their efforts on reducing the reasons why the foods score low in the first place and improving our "real" food supply. And i am anti-big govt. Go New York for putting limits on soda sales! Food manufacturers will start paying more attention if more restrictions are put in place such as these."

Setting aside the super-interesting discussion of the new New York soda laws, I couldn't help but wonder if my friends were right. Although Bittman does cite a study in which sodas labelled with a red light reduced sales by 16 percent. It's not a huge drop but that's still something, right?

What do you think -- would you say most people already know what "healthy" food entails? Are food health labels overreaching or a quick visual health reminder? What does "healthy" mean to you in the context of food? Anyone else ever buy anything stupid because of a dubious health claim on the package?!