The names we actually know these foods by are way more appetizing than their literal and honest descriptions. Bon appétit! 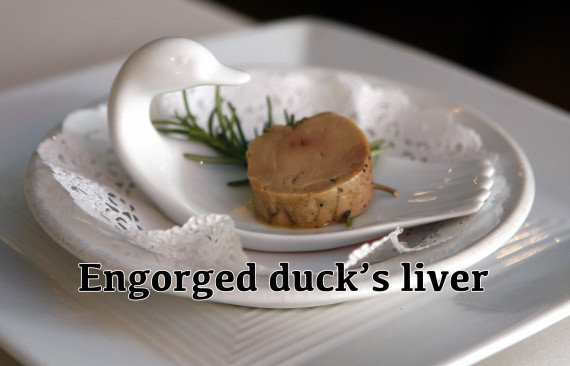 Foie gras -- usually extracted from force-fed ducks or geese -- does literally translate to "fat liver," but it sounds so much fancier in French. But not all foie gras comes from specially fattened birds. Some farms are free range and others let their ducks beef up naturally. (Photo via AP) 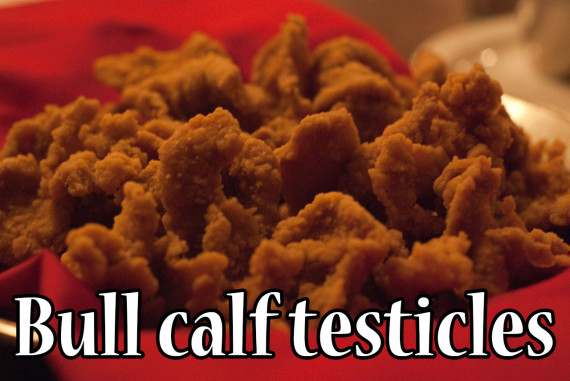 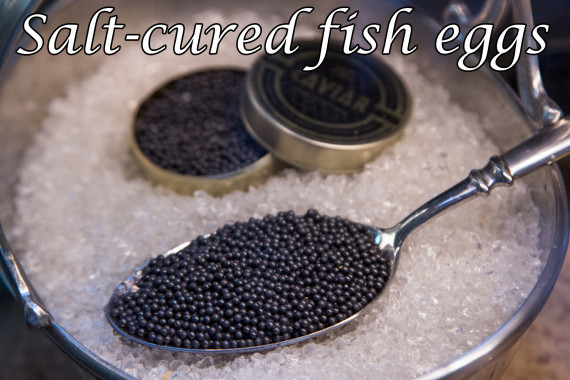 This delicacy is also known as "roe" and is often used as a spread or garnish. (Photo: Holger Leue via Getty Images) 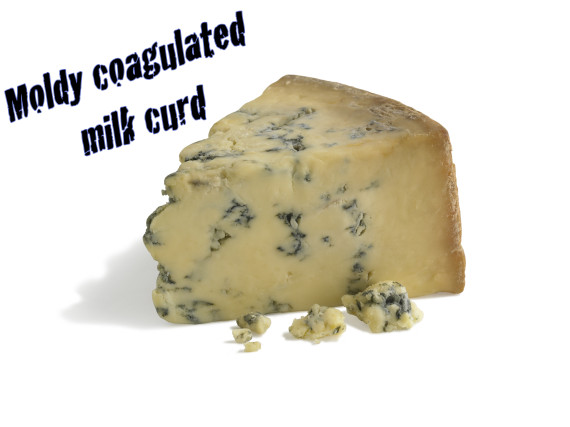 We really hope you already knew the blue was mold. And yes, that is how cheese is made. (Photo: John E. Kelly via Getty Images) 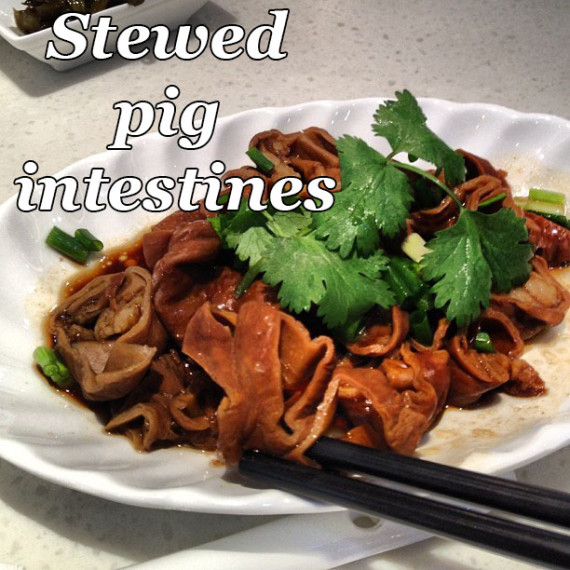 They don't always come from a pig -- cultures around the world also eat intestines from sheep and cows -- and sometimes they're fried or baked. Either way, they're still intestines. (Photo: Rawksteadi via Flickr) 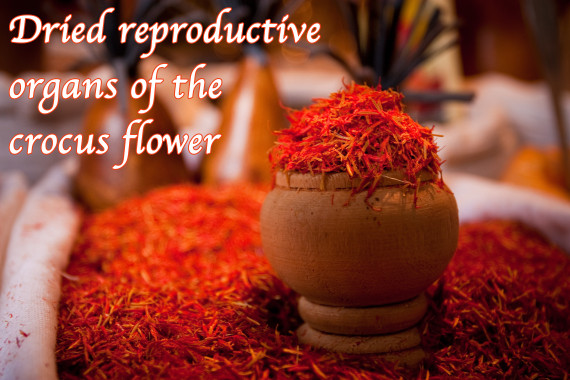 This rare and incredibly expensive spice comes from the flowers of the Crocus sativus. Their stigmas and styles, female reproductive organs of flowers, are harvested and dried for use in cooking. (Photo: Kelly Cheng Travel Photography via Getty Images) 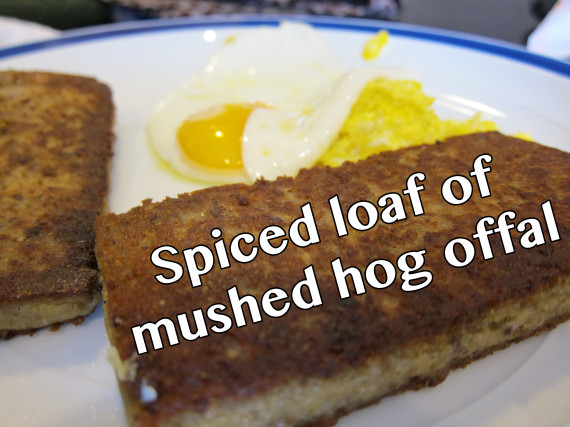 This classic Pennsylvania Dutch breakfast dish is commonly made by taking unused parts of a pig -- also called offal -- and mixing them with cornmeal or flour to make a loaf shape. Individual pieces are often served after pan-frying. (Photo: voteprime via Flickr) 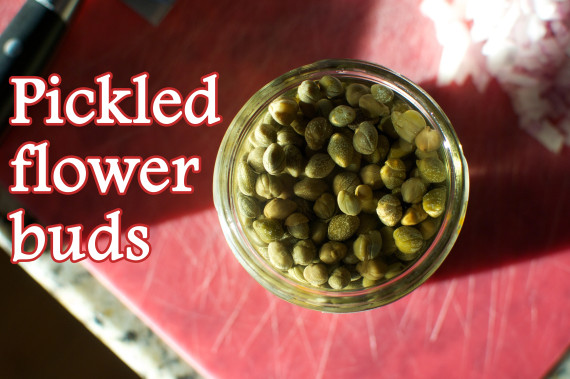 These distinctively flavored toppings are actually flower buds from the Capparis spinosa that have been sun-dried and brined or packed in salt. (Photo: Kevandy via Flickr) 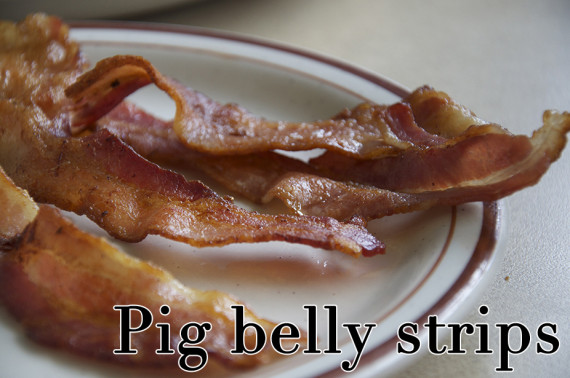 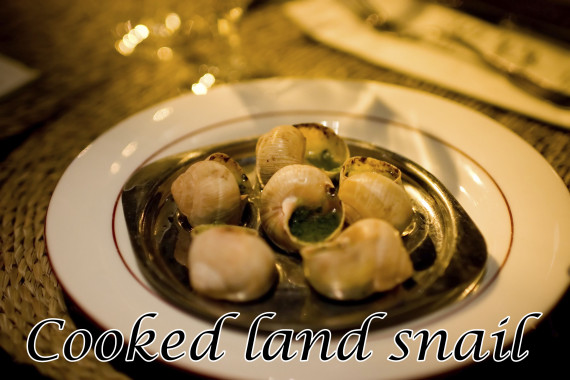 The digestive tracts of edible snail species are first typically purged, before being killed, cooked, loaded with butter and garlic, and crammed back in their shells for serving. (Photo: zxvisual via Getty Images) 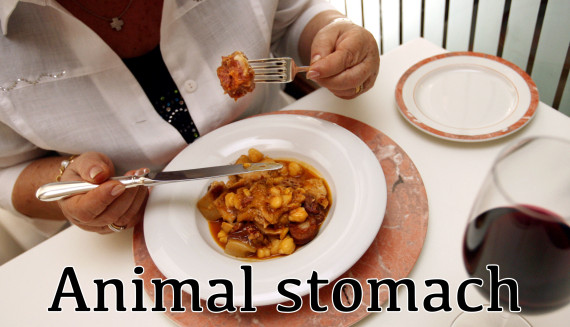 Stomachs are actually incredibly popular across many cuisines. Beef, pork, sheep, you name it. (Photo: Lluis Gene via Getty Images) 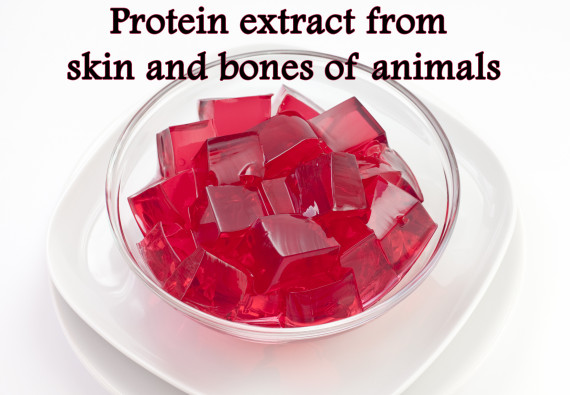 Typical gelatin is included in a variety of products and extracted in a number of different ways. Most of them require extraction of natural collagen found in the leftover carcasses of domesticated animals. (Photo: instamatics via Getty Images) 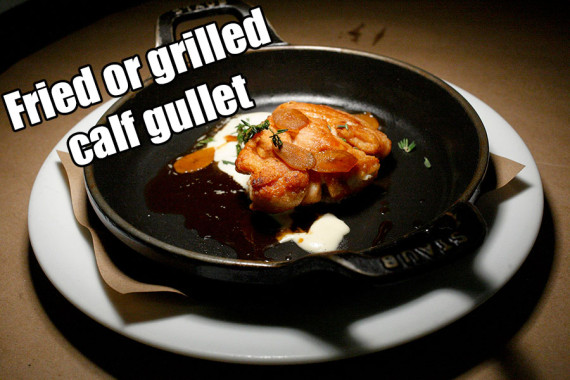 This innocuous and delicious sounding meal is actually made out of the thymus or pancreas of calves, lambs, pigs or cows. (Photo: Bloomberg via Getty Images) 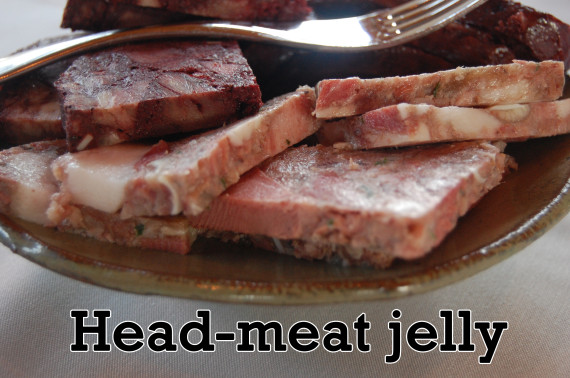 Take the head of your favorite livestock animal, stew it in a pot with some vegetables and seasoning, then strip the meat off of it and let it sit. Thanks to the natural collagens in the meat, it will turn into a jelly that you can form into a shape. Or not. (Photo: stu_spivack via Flickr) 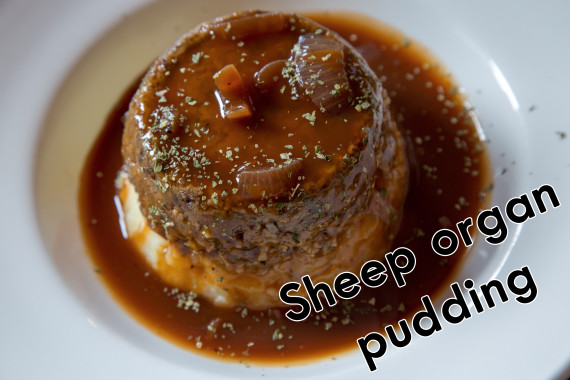 This traditional Scottish dish is a pudding made from the "pluck" of a sheep -- or its heart, liver and lungs -- mixed together with onions and seasoning and then stuffed into a casing, traditionally from the animal's stomach. (Photo: Holger Leue via Getty Images) 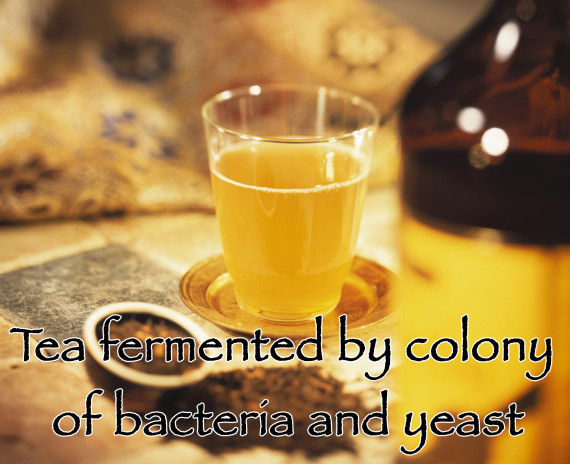 First, grab your symbiotic culture of bacteria and yeast, also called a SCOBY. It looks like a slimy mat. Throw it in a container, pour in your tea and wait for it to ferment. The end product will be mildly fizzy (and delicious?). (Photo: Werner Blessing via Getty Images) 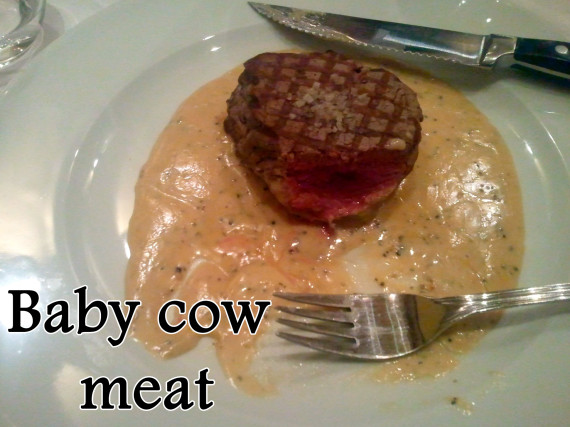 Veal comes from a variety of cows, but almost always from animals that are under a year old, and as young as just a few days old. (Photo: Ariela R. via Flickr) 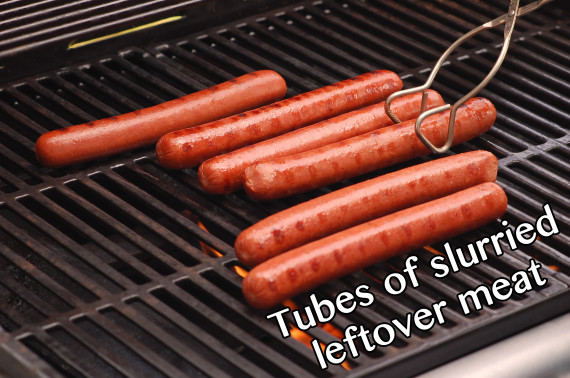 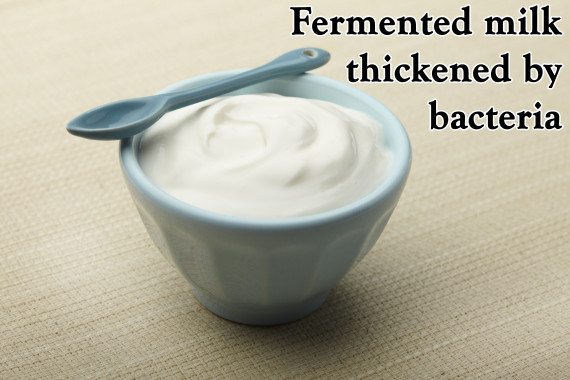 Adding specific bacterial cultures to milk results in the fermentation of lactose and the production of lactic acid, which clots the milk and gives it a yogurty tartness. (Photo: James And James via Getty Images) 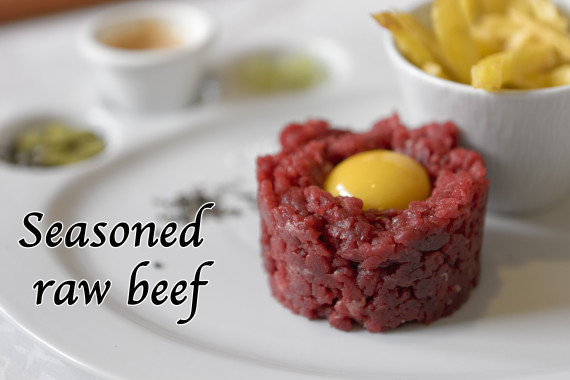 This is effectively an uncooked hamburger patty, seasoned and served with some garnishes. To up the raw factor, an egg yolk is often cracked on top. (Photo: Jekaterina Nikitina via Getty Images) 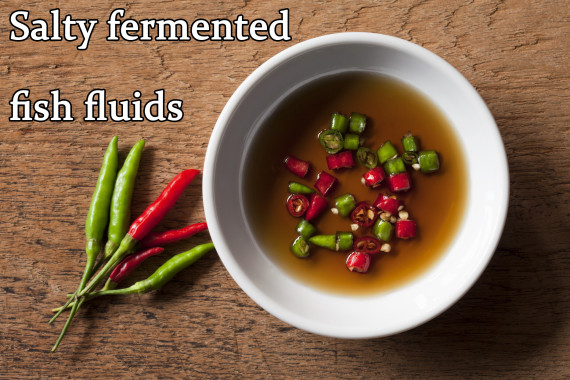 This tasty accoutrement is made by packing fresh fish and salt into a box, which is then left to ferment. After a number of months, the fish become hydrolized and their delicious salty fluids float to the top. (Photo: enviromantic via Getty Images) 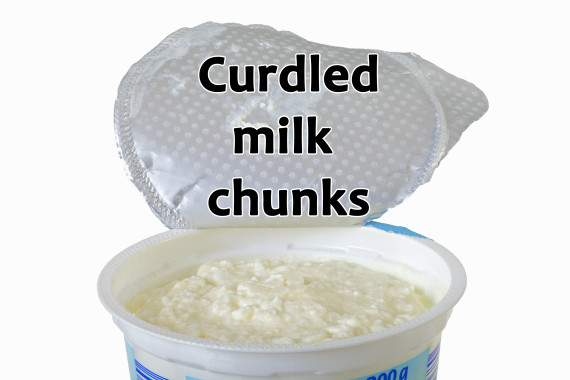 The process of cheese-making leaves both curds (solids) and whey (liquids). Cottage cheese curds have not been pressed, which means they remain more soupy than many regular cheeses. (Photo: Markus Guhl via Getty Images) 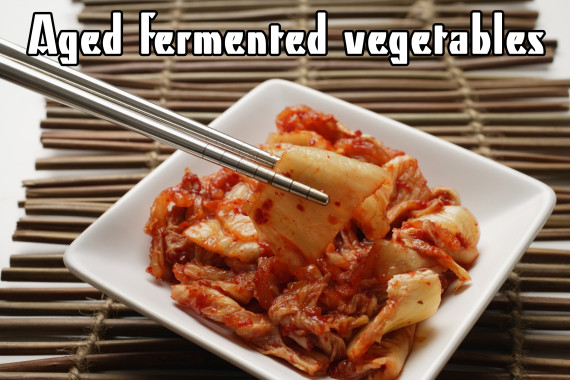 This traditional Korean side dish is made by mixing a variety of chopped vegetables and seasonings into jars, where they are left to ferment, giving them a strong and very recognizable flavor. (Photo: Asia Images via Getty Images)

Weird Food: The Most Dangerous Foods You Can Eat
More:
Taste BaconCaviaryogurt