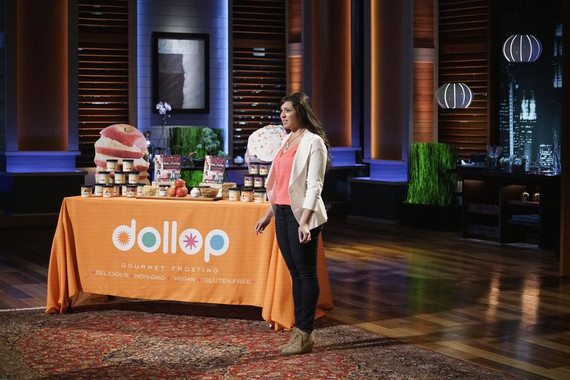 
Of nearly 40,000 Shark Tank applicants, Heather Saffer was one of 116 lucky people to be featured on Season 7 of ABC's hit TV show. In the episode, she pitched her company, Dollop Gourmet, which produces all-natural gourmet frostings.

Saffer got into baking almost by accident. "I was going to school for psychology," she explained. "I actually didn't go to college until I was twenty-one. I was taking classes here and there. Then, when I was almost done with my degree, I stopped going for a while." At this point in her life, she was working at a car dealership and wasn't sure what her future entailed.

Saffer recalls that, just around the corner from where she worked, there was "a little bakery that sold the most fabulous cookies--cookies that were topped with the most dreadful artificial frosting." Even when she went shopping at the grocery store for supplies, Saffer noticed that there weren't any natural frostings on the market.

"There is natural foods for everything else, like natural popcorn and pizza, but there were no natural frostings," she said. Because she has a gluten allergy and is lactose intolerant, she wanted to come up with something that was healthier: less sugar, tastier, gluten free and non-GMO.

Saffer had finished her bachelor's in psychology, but didn't want to do more school. "I thought maybe I'd start a business, so I started doing research about businesses. I saw cupcakes were becoming really popular. I had never baked before; not even as a kid. I decided I would try to teach myself how to bake, and I was actually good at it."

In 2010, Saffer started the Dollop Gourmet brand, a natural foods company that produces all-natural gourmet frostings and spreads made from premium non-GMO ingredients. Saffer's self-taught baking skills landed her a first-place win on a Season 4 episode of Cupcake Wars in February 2012, where she collected a $10,000 prize.

She continued her journey by authoring a gourmet frostings cookbook, The Dollop Book of Frosting, and focused on her true love. "I wanted to create a better frosting because nothing out there existed. I have always loved frosting, and I knew that other people do too," Saffer explained.

"I reformulated. I wanted to be sure it tasted amazing. I took about a year and a half to perfect the formula, as I tried different types of sugars and oils...all types and sorts of things to get to the formula I have now," she said.

Her dedication paid off. Shark Tank's Kevin O'Leary, dubbed "Mr.Wonderful," competed with New York City real-estate mogul Barbara Corcoran to get a piece of the business. The cupcake queen confidently accepted Corcoran's offer of $75,000 for 20% equity. "I liked Barbara because I knew she had some food companies," Saffer said. "I looked at her portfolio."

The appearance has so far been a sweet success. "After being featured on Shark Tank, sales keep coming in every minute, and my phone keeps vibrating every minute with orders, so that's really awesome," Saffer said.