The New York Times ran an article about the Lure of Forbidden Food. It's a topic I know all too well because I regularly get questions like this in my email:

"We have a toddler who is absolutely amazing, but has an insatiable appetite and who I fear is addicted to food."

"My son's first thought of the day is what is there to eat? When he is done, he asks what is for the next meal. His favorite part about the baseball game? THE SNACKS!"

"As soon as one meal is done my daughter is already thinking about what she wants for a snack. If I say 'no, we just ate,' she stomps off to her room, yelling and crying." 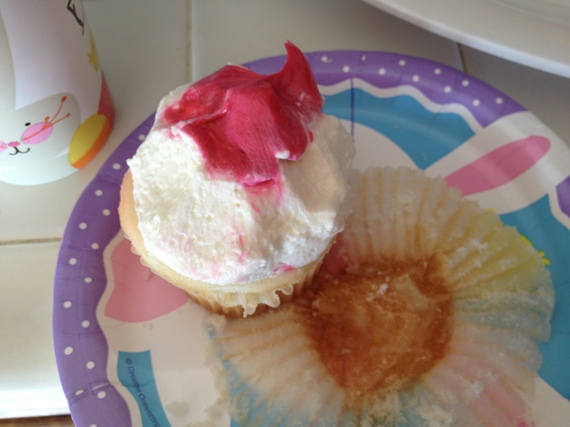 The Research on Restriction

Researchers Leanne Birch and Jennifer Orlet Fisher first examined the effects of food restriction in 1999. When restricted from a palatable food item, preschoolers increased their selection and intake of the target food. In their 2000 study, 7-year-old girls ate a standard lunch followed by free access to snack food afterward. The girls who were restricted at home not only ate more of the snack foods, they had negative feelings about their eating.

"Parents need to know how to use feeding practices that not only promote fruit and vegetable intake but also food regulation" says Brandi Rollins, PhD, Post Doctoral Scholar in Human Development and Family Studies at Penn State. "What doesn't work is 'forced compliance.' There are fewer opportunities to practice self regulation, learning how to manage those palatable foods."

There is also the chicken and egg question. Are parents reacting to a big eater that may also be larger than average, or is the restriction the cause of the food obsession?

Rollins and colleagues designed research to replicate Birch and Fisher's 1999 study, but teased out the effects of restriction based on children's appetite and temperament. The children who found palatable food highly desirable and rated low on inhibitory control ate the most in response to restriction.

"Their inability to self-regulate means they go crazy," Rollins says about children lower in inhibitory control. "Controlling feeding practices only make this worse."

She explains that keeping palatable food in sight, but off limits, is the most problematic. But she makes it clear that research to date shows more about what doesn't work than what does. "We know very little about what works -- it just hasn't been tested," she adds.

Rollins encourages a positive approach that includes structure, routines, timing and limit setting. Kids learn to expect those items and, in return, feel more relaxed. She adds "This provides a safe environment to learn about self regulation."

International feeding expert Ellyn Satter provides specifics on how to handle low nutrient foods that you can read about here. It includes meal structure (planned meals and snacks at the table), allowing children to decide when they are done, a small serving of dessert with dinner and periodic offerings of sweets at snack time, allowing children to eat until they are satisfied. This shouldn't be confused with an indulgent feeding style that is also not good for kids' eating habits.

Giving children this type of food freedom means they will eat more, right? At least one study shows this is not the case. One group of children were restricted from sweets, the other from fruit and the third was told they could eat as much of they wanted. When the food was made freely available, the unrestricted kids consumed the least. Not only that, they reported less desire for sweets compared to the other two (restricted) groups.

Andrea, mom of a sweets-focused preschooler, decided to give it a try. "We have noticed big changes even in just one month." she says, adding that her daughter's interest in candy decreased after about 10 days without restriction. "The control over her food (specifically sugar) had become quite a stress in our lives and changing our ways was also a challenge."

Megan, who adopted Satter's Division of Responsibility when her child was one, found that allowing her child to decide when she was done with meals put the kibosh on her growing food fixation. But when she tried to bring sweets in the home on a regular basis when her children got older, the whining became unbearable.

"We can have dessert once every week or two without incident, but more than that doesn't seem to work," she says. "I wish it were different but I really do believe a lot of this is their natural tendency to crave sweets more than other kids might."

Another popular strategy is to have kids choose one treat food each day. Jane, mom of 3 girls found this worked well for two of her girls, who would often forget about the treat. But her youngest child reacted to this strategy by sneaking food. "I see now that to my 5-year-old, she probably feels that it is being restrictive and maybe not enough to even satisfy her."

Looking at it from the child's view

Jane was able to see food through the eyes of her child, which can be difficult for parents who don't view what they are doing as restrictive.

Jill Castle, pediatric nutrition expert, recommends parents talk to children with some questions like: "It seems like you might be hungry after meals, want to talk about it?" or "are there foods you really love that we aren't having?"

"Make it clear that it's your responsibility to make sure everyone in the family is happy," she says. "Of course, if your child expresses that she wants chocolate all day long then you have an opportunity to discuss how your family eats and your food philosophy."

Another key factor is children learn to see food the same way their parents do, which may not always be healthy. Research shows that parents who eat for emotional reasons, feel out of control with eating (called disinhibition) and worry about weight (their own and their child's), not only are more likely to utilize controlling feeding practices, but tend to have children with similar issues.

And lastly, a child's increased desire to eat may mean there's something else that is bothering them or, in more rare cases, a medical condition like Prader Willi.

Restriction is not the answer

A 2013 study in Childhood Obesity showed that nearly 60 percent of parents of overweight children approve of controlling feeding practices, like restriction. But restriction only distracts from what's really going on and makes food an issue.

Rather than restrict a child's intake, parents need to ask why their child is acting out when it comes to food. It could be a child's perception of restriction, a lack of structure and limit setting or something else entirely. Dealing with the underlying issue will be met with the most success.

What are your experiences with restriction?