A sobering review of 30 days' worth of Food Recalls

A few times per year a food recall will make newspaper headlines, usually after the populace is sickened in some spectacular way. But a look at the FDA's helpful catalog of lesser recalls speaks volumes about work-a-day troubles with the nation's food pipeline. Recalls happen far more frequently than you might think. Read on if you need an excuse to visit your local farmers' market.

By the Numbers
For the past 30 days, there have been 18 food recalls posted on the FDA's site, including:

Four recalled for Listeria monocytogenes
Two cheeses and two bagged salad greens may contain this bacteria. When pregnant women are cautioned against soft ripened cheeses and deli meats, this is the potentially abortion-causing bug the obstetrician is trying to help them avoid.

Two products recalled because they may contain small metal fragments, a pasta salad and a "cheeseburger skillet dinner," whatever that is.

Last but not least, a carrot juice was recalled because of the "potential to be contaminated with Clostridium botulinum." Now there's a potentially fatal toxin you do not want to imbibe. Because the press releases carried on the FBA site are written by the recalling companies, they do not follow a standard format. This one happens to be silent on the topic of how the problem was discovered. It does reassure us, however, that "No illnesses have been reported to date." That's a relief, because the press release details that:

Foodborne botulism can cause the following symptoms: general weakness, dizziness, double-vision and trouble with speaking, breathing and swallowing. Weakness of other muscles, abdominal distension and constipation may also be common symptoms.

People experiencing these problems should seek immediate medical attention. Consumers are warned not to use the product even if it does not look or smell spoiled.

That last sentence is sobering, because the slim cross section of the population who A) drinks carrot juice and B) reads the press release and C) lives in California may have no way to know whether they're enjoying Clostridium botulinum with their commercially prepared smoothies.

Here's another fact that startles consumers: all these recalls are voluntary. That's because the FDA does not actually have the power to force a recall. It has the power to inspect, and to shut down, but not to recall products. Yet many of the press releases on the FDA website say "the recall was voluntary," leading some readers to potentially assume that the problem is not serious.

To assist consumers in determining whether they have purchased a recalled food product, the FDA maintains what I believe may be one of the grimmest Flickr Photostreams in existence, which show the labels of potentially tainted foods. 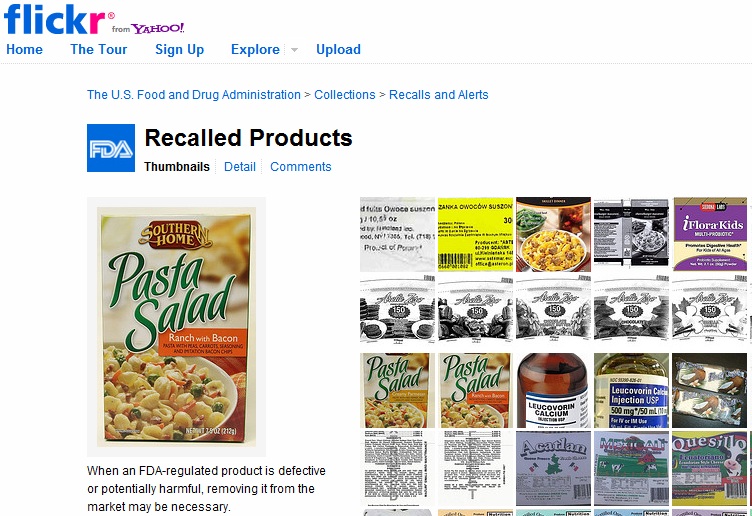 Food borne illness has been a part of humanity from the beginning. Several centuries before processed food was invented, our ancestors consumed plenty of questionable food. Food borne illness will never be completely eradicated, no matter where it's produced, or by whom. And modern processed foods are a convenience which I would (occasionally) rather not do without. But the more I can grow myself, or purchase from a farmer who must look me in the eye when he sells it, the better. And when agricultural policy encourages the agglomeration of thousands of farming acres under one corporate umbrella, the more potential we have for big recalls.

So I'll stick with the little guys, and not just because they're more charming.