Hawaii culture, from food to fine arts, is riffing on its traditions in ironic and often beautiful ways. Tradition stands strong in the Bishop Museum's stunning exhibit of three muscular Ku statues carved from whole tree trunks, sole surviving temple idols from the early 19th-century reign of King Kamehameha I. Two of the Ku, on loan from the British and Peabody Museums, have returned to the islands for the first time, and already there's talk of people chaining themselves to the statues to prevent their departure in the fall. But if the Ku themselves came to life, surely it would be as three of the strong male dancers who modeled clothes, accessories and tattoos by 14 Hawaiian designers at this spring's Mamo Wearable Art show.

Part of the annual Maoli Arts Festival, the Mamo fashions were modeled by hula students of all ages and sizes from five halau; they danced down the catwalk under the direction of musician and kumu hula Robert Cazimero. The clothes ranged from fussy missionary muu-muus to body-tracing shapes in fresh colors and geometric leaf prints; others used hand-beaten tapa bark cloth, woven lauhala fronds, feathers and other traditional materials in startlingly original couture. There were a dress and tunic decorated with translucent cut-out scallops by Marques Marzan, a lauhala weaver and native practitioner affiliated with Bishop Museum. How green, I thought-- reusing all those little round punch-outs left over when the supermarket checker pulls the plastic shopping bags off the rack. But the truth was greener still. 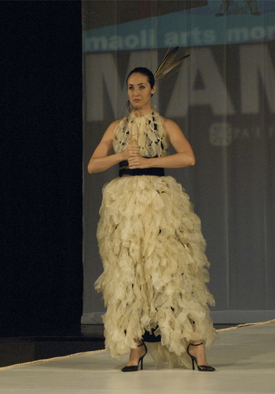 Afterwards, they let us touch the clothes, hanging on a rack. The scallops didn't feel like plastic. They felt soft, smooth, organic. "It's silk," I said.

"It's pig gut, intestine, you know, like sausage skins?"

A silk purse out of a sow's ear! The show's organizers confirmed that this was so. It made sense; in a subsistence culture, the Hawaiians would have used every part of the pig, a precious resource.

In addition to the major gods of sky, earth and sea, the Native Hawaiian people worshipped many lesser deities, including pig and shark gods. They rarely killed sharks, who were the aumakua, or guardian spirits, of certain clans. It's fitting that the state of Hawaii has passed the first-ever law banning the possession or selling of shark fins. The "shark-fin soup law" took effect July 1.

As a child I loved watching the restless sharks in the Honolulu Aquarium, and was scolded for refusing to eat shark fin soup at a Chinese restaurant. It was as unthinkable as eating the tiger in the Honolulu Zoo. Today I feel the same way about bluefin tuna, having come to know what I only sensed, then, that it's a crime against nature to eat big wild predators. Yet in spite of myself, I guiltily admired my grandfather's white sharkskin shoes, the thick leather surprisingly soft to the touch. 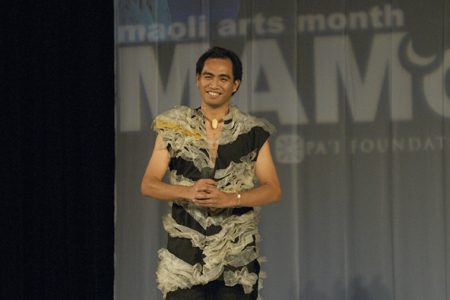 Our tastes in fashion and food are often irrational, cruel. The Hawaii ban seeks to end the barbaric practice of cutting the fins off live sharks and tossing the mutilated creatures overboard to suffer and die. Overfishing, driven by the growing luxury demand of China, has brought a third of open-ocean sharks to the brink of extinction. Current international laws restricting shark fishing, however, are deemed ineffective by conservation groups. Instead, Pew Environment Trust and others say, fishermen should be required to bring the whole shark to land.

A one-fin, one-shark policy would handicap an industry whose economics depends upon jettisoning the bodies in order to pack the hold with small, light, high-priced fins. The regulation would ideally mean fewer sharks caught--but what would be done with those brought to land? The flesh is high in mercury and has no nutritional value. The cartilage could go for supplements of unproven effectiveness at soothing creaky joints; the teeth for jewelry; the skin for shoes (but I'm over that, now). Overall, each shark killed would remain a tragic waste, moving these slow-reproducing animals closer to extinction.

In contrast, the current American culinary trend for eating every part of the pig, from head to trotters, bacon to chops to roasts to chitlins and the demand for heirloom pigs who've been humanely raised on non-industrial farms is practically a sustainable success story. Yes, for our health and the planet's, we should eat more vegetables and less red meat. But as it turns out, swine are responsible, on average, for only about 1/5 the CO2 emissions of beef. We can and must do away with Confined Animal Feeding Operations (CAFOs) and the water pollution and dead zones they produce. All that remains is for us to wear what we eat.

Do One Green Thing: Saving the Earth Through Simple, Everyday Choices
by Mindy Pennybacker, Meryl Streep