If you watch the news or scroll social media, you should probably be in fear every time you eat. Between E. coli, Listeria, and Salmonella, the news media hypes up food-borne illness like never before. It only takes a couple minutes scrolling on Facebook before you find a new article entitled, "the hidden dangers behind your food" or some other fear-inspiring headline.

The reality and irony to those is that, if you live in the United States, we live in a country where never before have so many food safety standards and education been in place in the history of our food system. We all remember the history of our food system, stories much like Upton Sinclair's The Jungle were commonplace. Today, the face of food safety is much different. Many who produce and market our food like to use this fact as a selling point. We have outplayed the reality of safe food so much; it has become a buzzword we carelessly toss out the window. In fact, I've actually seen some consumer research shows that "safe food" doesn't resonate as a selling point with consumers anymore.

If you ask me, it is pretty sad reality when we carelessly and thoughtlessly dismiss facts about the safety of our food and we can no longer find pride in the fact that what we put on our tables is indeed, safe. Even worse, as a public, we have become increasingly fearful and incessantly critical of the food we put on our tables. I've written about our addiction to fear before.

But the worst part of it all is that we believe that by promoting this fear, we are somehow doing a service to everyone by making our food safer. This may or may not be, but the reality of the situation is that this perceived fear paired with science illiteracy has actually made it harder for those who ensure our food stays safe to do their jobs.

Don't get me wrong, taking a critical look as well as being cognizant about the food we eat is a good thing. I love when people want to learn more about how their food is grown or produced. But when I find myself in the depths of the latest scandal in regards to our food, I find that gaining perspective helps bring me back to reality. It is easy to get carried away in the headlines without taking time to look at the facts.

So, let's gain some perspective. What is the reality? Is our food really safe?

The U.S. census bureau reported that in 2010 the population of the U.S. stood at about 308 million. Now you figure, 308 million people eat an average of two meals a day, some three a day but for simplicity's sake, two meals a day. If you do the math, that is 616 million meals eaten every single day, which equals out to around 225 billion meals consumed in the United States each year (616 million * 365).

Now out of those 225 billion meals consumed, according to the CDC annual's estimates, about 48 million illnesses result from food born pathogens, 127,839 are hospitalized, and 3,037 deaths each year.

According to the math, less than 1 percent of meals eaten in the United States every single day result in a food borne illness, yet if you were to watch the news or scroll Facebook, you'd get a different story. Now please don't take my casual nature of the subject to mean that I don't care about food safety.

As producers and growers of the food that ends up on all of our plates, food safety is something that is on our minds almost daily. Would we like to see that number at zero point zero? Yes of course. After all, we are consumers too. And feed our families the same food you do. In a perfect world, there would be zero risks associated with the food we eat. But we don't live in a perfect world; we live in the real world.

And here in the real world, there's a whole host of people who have made it their life's work to try and get our food system as close to no risk as they can. As well as ensure everyone in this country has a full belly, but that is another buzzword for another time.

So as someone growing and producing a small part of the food that ends up on your table, would you do me a favor? Every once in a while could we all give a tip of the hat to those who put their life into ensuring that our food supply is safe? Let's reclaim and be proud of the fact that our food supply here in the United States remains one of the safest in the world.

While so many out there have to live in fear of their next meal or finding clean water, we don't. It is not only a fact, it is a true blessing we take for granted every single time we put that fork to our mouths.

I'd have to say that our food is pretty darn safe, wouldn't you? 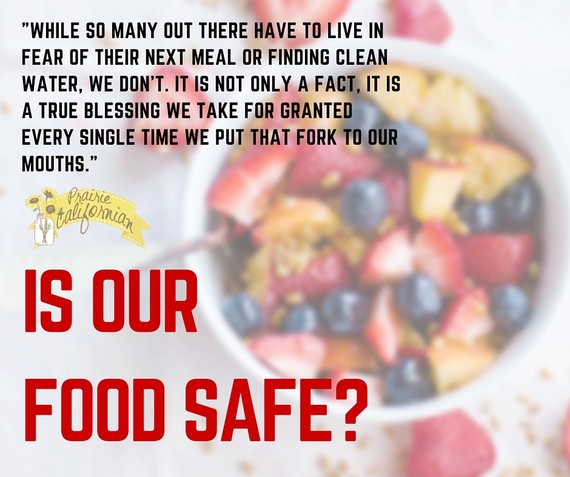 26 Products That’ll Help You Relax After A Long Week