World Population Day 2013 came and went with little fanfare this year. There were no organized efforts to draw attention to the annual United Nations observance, which underscores population issues. The sole article I saw on the subject matter-of-factly noted that "global population is growing faster than expected" as U.N. demographers revised their projections upwards to 9.6 billion by 2050 and 11 billion by 2100.

These new numbers are cause for concern, since that's almost a whole billion more than the 10.1 billion projected for the century's end in 2011, a mere two years earlier, points out Science Daily. But this year's U.N. mandated theme for World Population Day focused on the need for reinvigorated contraceptive efforts--and missed the most salient point of the numbers. 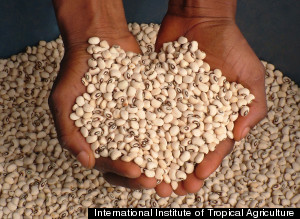 Hunger is the most pressing issue we face, especially considering those numbers: one out of every eight people in the world today suffers from chronic undernourishment caused by food scarcity, notes the United Nations Food and Agriculture Organization (FAO). And many believe this number is likely to increase as rapid population growth taxes limitations on food, water and farmland regionally--and growing development and affluence change our diets.

"More people are eating resource-intensive 'Western' diets rich in meat and dairy products," explains The Feeding of the Nine Billion, a report from the British policy institute Chatham House. And the numbers it cites due to this trend are potentially staggering: "the World Bank projects that by 2030 worldwide demand for food will increase by 50 percent, and for meat by 85 percent." So crops will be taxed still further to meet the increasing demand for grain to feed animals.

Yet paradoxically, and what many don't realize, today "the world produces enough food to feed everyone . . . 17 percent more calories per person today than it did 30 years ago, despite a 70 percent population increase," notes the FAO. The Chatham House report chalks it up to the Green Revolution, an international effort begun in the mid-20th century to propagate production-increasing agricultural improvements throughout the developing world, and notes that "global aggregate food production has kept pace--an astonishing achievement."

Yet the fact that so many people are hungry or malnourished today "is the clearest illustration that not everyone has benefitted," points out Chatham House. Why is food security compromised? It's a complicated issue, with myriad answers.

The FAO notes poverty, harmful economic systems and conflicts are all principal causes of hunger and food scarcity, and in a Catch-22, "hunger is also a cause of poverty." And Chatham House points out that one of the significant problems spawned by the Green Revolution is that the benefits of increased food production have not been allocated equitably. Though food exists, almost a billion people go hungry today because they lack access and entitlement to it.

So, while we do produce enough food to feed everyone currently, increased food production and food security may be a pressing issue in the future.

Some studies, such as the one just issued by the University of Minnesota's Institute on the Environment (IonE), point out that crop yields worldwide are not increasing quickly enough to support estimated global needs in 2050. In addition, the world's food and energy economies are inexorably intertwined, as Chatham House notes. For instance, we can't produce fertilizers; harvest and process crops; transport and distribute them to market; cool and cook them and more without energy.

But can we really build a better food system? Many say yes. And it does not necessarily mean just producing more food. Instead, it means producing more in addition to addressing inequities. "More than two billion people live on less than $2 per day, global unemployment is at a record high and poor households in the developing world spend 70 percent of their income on food," notes sustainable agriculture expert and Food Tank co-founder Danielle Nierenberg in Worldwatch Institute's State of the World 2013.

Another reality is that all of the players in the process--from governments and development agencies to NGOs and funders--"tend to invest in increasing production and improving yields rather than in more-neglected parts of the food system that have the potential to improve livelihoods, decrease malnutrition and protect the environment," says Nierenberg. Some examples she cites include efforts to reduce and/or prevent waste from field to fork, which can total 30 percent of yearly harvests, and a stronger focus on food aid and local school nutrition programs.

According to the National Resources Defense Fund (NRDC), 20 percent of the milk produced in the U.S. goes bad before it is purchased. Processing and packaging can help prevent waste by protecting and preserving food. For instance, aseptic processing and packaging technology enables nutritious yet perishable foods such as milk to be processed and packaged locally and transported great distances without requiring refrigeration. In addition, it extends the milk shelf life up to 12 months.

Ultimately, to grow a better food system we need a good recipe for success. There are several key components that will lead to healthier food systems everywhere. These include:

"The 20th century Green Revolution achieved astonishing yield increases. Now, a 21st-century equivalent is needed - one that not only increases yields, but that also moves from an agricultural model that is input-intensive (in water, fertilizer, pesticide and energy) to one that is knowledge-intensive," notes the Chatham House report. Genetically modified crops will have a role, but so will ecologically integrated approaches such as agroecology, which is a whole-systems approach based on traditional knowledge, alternative agriculture and local food system experiences and focuses on techniques that are often more resilient and equitable for communities.

Last year, I noted that philanthropist-farmer Howard Buffett started out giving farmers in developing areas the best of modern agricultural technology, but now--after his forays in the field--only teaches methods that are affordable and sustainable. At Tetra Pak, we also believe in creating sustainable production chains, as evidenced by our Dairy Hub program that links remote smallholder farms in undeveloped countries to dedicated dairy processors. This helps communities flourish nutritionally, economically and environmentally.

3. Making the basics available to all.

Farms need access to five key resources: assets (including land, machinery and water); markets with infrastructures and communication networks for information on pricing and supplier standards; credit to allow access to supplies and avoid predatory lending; knowledge to disseminate R&D findings; and risk management tools to hedge against bad weather or crop spoilage, notes the Chatham Report. Nierenberg notes that while many reports substantiate the success of agroecological technologies, little attention is given to ensuring that farmers know about them.

Just as the International Energy Agency was created to coordinate collective global efforts in future oil crises, an equivalent is needed to create an emergency response system for food scarcity, notes Chatham House. Issues to address can range from rectifying long-term supply agreements that can disadvantage poor countries that haven't negotiated fair deals for themselves to global climate change and its impact on rising food prices.

Chatham House believes that the prospects for a 21st century Green Revolution look good, if 'we' play our cards right. That 'we' is a call for collective action between nations, timely action in developing countries, commitment to social responsibility and political sophistication. And in my assessment, it is a call for unflagging determination to collaborate, resolve our differences and move forward, since failure is not an option.