On Wednesday I went to Barpak, Nepal's largest village. The region is one of the most beautiful on earth, with the snow-covered Himalayan mountains stretching in front of you like a curtain. But when you look down on the ground, what you see is heartbreaking. Seventy dead -- and what were once houses, now just piles of stones. Not one is habitable. There are landslides in every direction. The epicenter of the first earthquake is visible; you can see how the mountain moved, creating two steps. We were there to deliver much-needed food. But that is only part of the story. The rest is about determination and inner spirit. 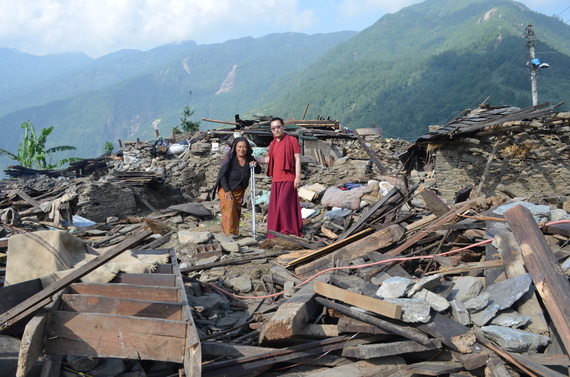 The value of Ground Reality. Many international aid organizations have been working hard to help the Nepalese. But they have tried to distribute aid very quickly -- the government restricts the length of their visas -- and in Nepal both geography and communication issues create huge hurdles. People in the more easily reached locales have been well taken care of. In fact, some people have received so much rice from relief organizations that they now have stockpiles in their homes and are selling the extra. Meanwhile, people in more remote regions have nothing. 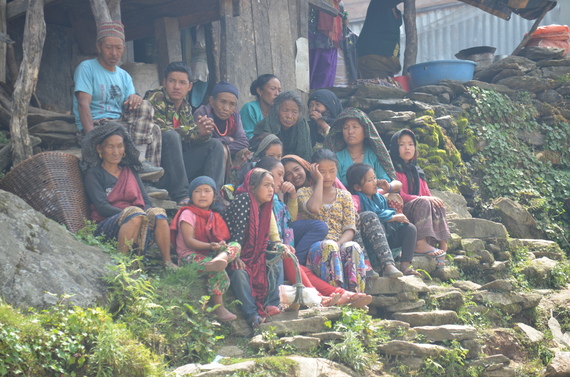 Over the past few days, the Buddhist Relief Services (BRS) has been distributing food to villagers in the hardest hit regions of Nepal. We are able to identify the places where need is greatest because our organization is hyper-local. While our fundraising efforts are international, our team members come from Nepal -- most are monks and nuns of the Trungram Monastery or members of the United Trungram Buddhist Fellowship (UTBF). We understand, what I call, Ground Reality; we see and hear what is happening on the ground, and are able to give aid where no one else has. 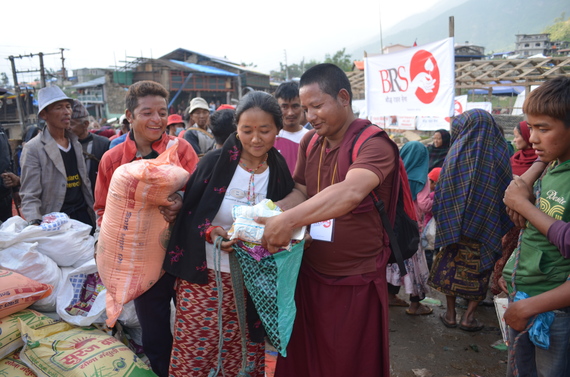 We targeted three villages in eastern Nepal: Barpak and Laprak of the Gorkha District and Semjong of the Dhading District. All three are densely populated, with huts packed like sardines onto the slender strip of flat mountaintop. With the villages completely destroyed, roads out and communication cut off, few relief groups have been able to get there. And none have brought enough aid for entire families.

We did. But in truth, it required some serious coordination. 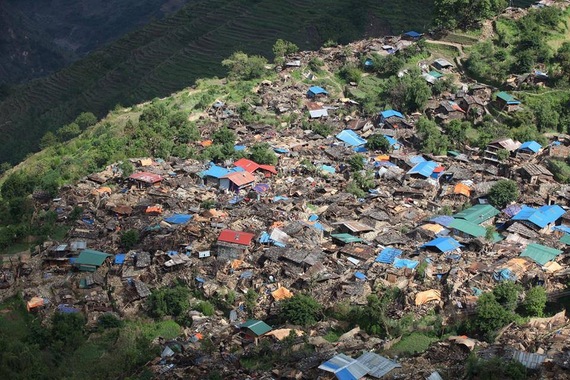 Organizing food delivery. We gave every family 30 kg (66.14 lb) of rice, a liter of oil, a bag of salt and a bag of textured vegetable protein (TVP) -- although it was very difficult to get food in the quantities we needed (in Barpak alone, we distributed 3 million rupees worth of food, enough for all 1,437 families). Some distributors are asking black market rates, which we refuse to pay. Some are selling at half the normal price; we didn't buy that either. Finally we made arrangements and set a date for delivery -- then a big rainstorm, followed by another earthquake, made roads impassable again. We bought the oil and salt and TVP in Kathmandu, and the rice in the southern plains of Nepal. It was shipped north in 10-wheeler trucks. Halfway there, we transferred the food to jeeps for the journey to the remote districts. Our volunteers rode along. It was hard to find drivers for the jeeps -- people were scared and they charged three times the normal rate.

They were right to be scared. They drove into days of wind-whipped rain and on-going tremors. There were more landslides. I was worried that our volunteers might be in danger. Eventually, we had to transfer the food to four-wheel-drive tractors to continue. A truck and a tractor each broke down, delaying Laprak's delivery by a full day.

The mountains are steep and rugged. Even things that look close on the map take forever to traverse; in the Himalayas, the most distance is vertical. At the last part of the journey, our monks and other volunteers had to hand-carry the food up mountain paths. 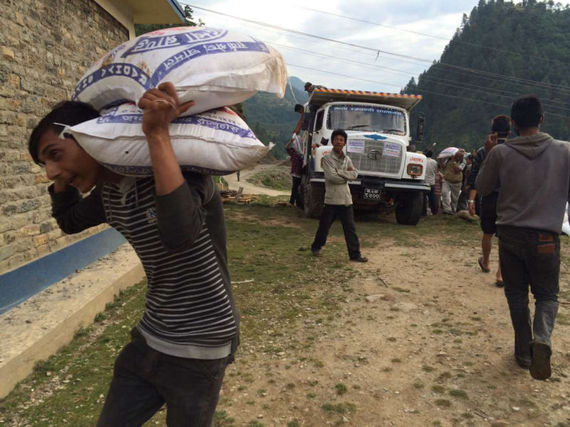 There were other obstacles. There is only one road up the mountain, and it passes through several villages. We had heard that on other mountains, in other such situations, aid workers have been accosted, beaten and made to give over their goods. It is quite dramatic. So we got government permits to distribute the food, and received government and army escorts. Fortunately, we encountered no difficulties. In fact, everyone we passed was kind.

Why didn't we just ask the villagers to trek down to collect their food? Because there are people who cannot make it down the mountain. What would happen to a family of just an older mother and her daughter? The mother cannot go down the mountain. The daughter wouldn't (in this culture unmarried girls are very shy). Neighbors cannot carry enough for two families. Only by delivering food directly to each family could we be certain that they got it.

We wanted to be certain. 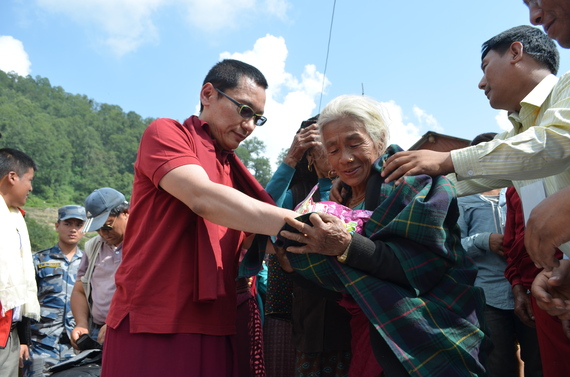