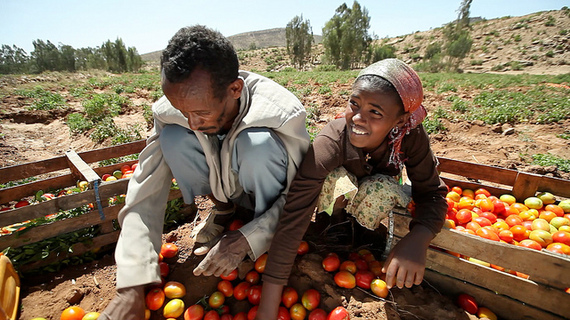 We cannot afford to waste that much food. About 842 million people today don't get enough to eat, and 98 percent of them live in developing countries.

All of us have to take action. Every country -- and every person -- needs to minimize food waste as a part of the fight against poverty and hunger.

There is a lot at stake. People who don't consume adequate calories can't live a full, active and productive life. In addition, about 2 billion people in the world don't get enough micronutrients -- vitamins and minerals that are essential to physical and intellectual development. Malnourished children and adults won't reach their potential, and are less able to escape poverty and help their nations to grow.

Wasting food also squanders resources like water, energy, fertilizers, and land. All of these things are growing more precious -- and expensive. As the global population grows from 7 billion today to 9 billion in 2050, we need to improve rapidly, even as we face problems today with scarce water, variable weather, and limited arable land.

When food is wasted, many people are rightfully upset. They ask if food can be distributed more efficiently so the surplus reaches those who need it most. Could we all buy and eat just what we need? Why can't we treat food as a natural resource that should not be wasted?

The answer is we can do all of those things. Our Food Price Watch Report focuses on what may be driving food waste in the developed world, which is responsible for 56 percent of food wasted globally. Supermarkets order more food than they can sell; people buy more than they need, often in response to special offers or advertising; and food is thrown away when it's still good because people misunderstand the "sell by" labels on the packaging. People have the power to send signals to suppliers by buying smaller quantities at the grocery store, ordering less food in restaurants, or by consuming less protein, which requires more resources to produce.

In developing nations, where the remaining 44 percent of food losses occur, many farmers' crops rot in the fields due to impassable roads and inadequate storage. In sub-Saharan Africa -- where 1 in 4 people are estimated to be undernourished -- as much as a quarter of food produced is lost each year. The World Bank Group is working with governments and other partners to help farmers improve their access to markets and finance, as well as their ability to store their crops. We committed $12 billion to agriculture in the past year to boost agriculture programs and food security.

Each of us has to take action quickly to stop wasting food and the resources needed to produce and transport it. Your actions -- combined with those of many others around the world -- can help millions of people lift themselves from poverty so they can live fuller, more productive lives.

Please share your ideas for preventing food waste in comments below. In particular, if you're in the food or restaurant business, I'd like to hear about the challenges you face, and your ideas or initiatives for dealing with surplus food.