Chasing after love can be exhausting. Some people know what they want and where to find it. Others spend hours on dating platforms like Tinder, Grindr and Match.com examining profiles, looking at headless torsos and following potential but elusive dates down messaging rabbit holes.

In 1897, Arthur Schnitzler wrote La Ronde, a play in which the sexual escapades of his characters went full circle. According to Wikipedia, the action progressed through the following series of amorous vignettes:

Whether these pairings were deliberate or circumstantial, what made Schnitzler's play so interesting was that they included characters from a wide variety of social classes who were well aware of their station as well as their limitations. Stephen Sondheim and James Lapine made this crystal clear in their 1987 hit musical, Into The Woods.

Whatever their motivations, the characters in La Ronde and Into The Woods knew what they wanted. For some people, the chase can be clouded by a vagueness of desire, personal insecurities, conflicting motivations and/or mistaken identities.

In February 2014, I attended a performance of a joint project between the California Shakespeare Theater and Intersection for the Arts (an all-female production of Twelfth Night that was being performed in a wide variety of venues ranging from Intersection's [then] home base in the San Francisco Chronicle Building to the Alameda County Juvenile Detention Center and the Berkeley Food and Housing Project). At the time, the production's director, Michelle Hensley, explained that:

"Shakespeare performed this play with a single-sex cast. All the roles were played by men. This must have increased the layers of confusion the characters felt when they fell in love with someone who turned out to be the 'wrong' person. I wanted to find out what would happen if the cast was only women. I think the confusion is equally delightful, and highlights how each of us has a male dimension and a female dimension, no matter our gender. I love the way Twelfth Night explores how falling in love can be an escape from enormous pain. So many characters in the play find themselves 'shipwrecked,' facing enormous losses in their lives and at a loss about just where to go or what to do next. Suddenly, someone wondrous and magnificent appears, someone whose love, if returned, could make all of your problems and pain vanish! Who wouldn't jump onto such a life raft?" 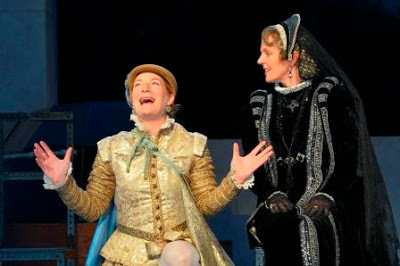 The California Shakespeare Theater opened its 2015 season with a refitted approach to Twelfth Night in which one man (Ted Deasy) joined an otherwise all-female ensemble in the role of the jester, Feste. Working on a stark but elegant unit set designed by Nina Ball with costumes by Meg Neville, director Christopher Liam Moore took Shakespeare's comedy to "a whole 'nother level." 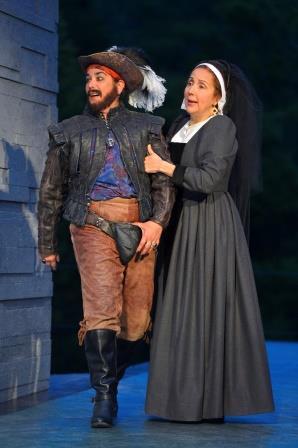 Several of the women playing male roles (Catherine Castellanos as Sir Toby Belch, Margo Hall as Sir Andrew Aguecheek and Rami Margron as Duke Orsino) sported full beards and mustaches while Olivia's sour and Puritanical steward Malvolio (Stacy Ross) was left without any stubble. This left the grieving Olivia (Julie Eccles) and the scheming Maria (Domenique Lozano) in full female garb while Lisa Anne Porter easily transitioned back and forth between Viola and her missing twin, Sebastian. 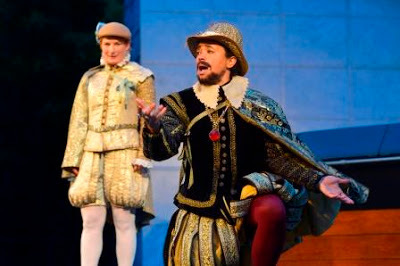 Moore tricked out his production with lots of delightful quirks and insightful touches. Few people would attend a performance of Twelfth Night expecting to hear pop tunes and country music as part of the evening's fun. Nor would anyone expect to see Sir Andrew Aguecheek dragging a brightly colored and beflowered rollaboard suitcase across the stage. 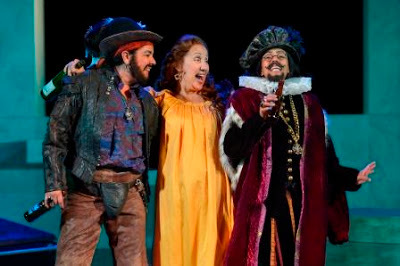 The key to the evening's success may well have been the sheer zest with which the largely female cast approached Shakespeare's comedy. Simply put, they were having themselves a whale of a good time in male drag and, as a result, capturing a kind of silly exuberance one doesn't always see in modern bromance narratives. As Moore notes:

"I'm very aware of the incredible imbalance between male and female roles in the Shakespearean canon (as an actor, I have played a lot of Shakespeare's heroines). In Twelfth Night, I have played both twins (Viola and Sebastian). I've also played Rosalind and Lady Macbeth, so I've always felt a bit guilty that I had taken these roles away from female actors -- felt that, on a personal level, there was a debt to pay. Twelfth Night is so much about transformation -- people assume other identities that lead to all sorts of possibilities and open their eyes to other parts of themselves. This play, in particular, deals with issues of gender and identity in ways that I thought would make this casting a combustible mix. I was so inspired by the pool of amazing women actors in the Bay area that, as a director, I just wanted to be in the room with them." 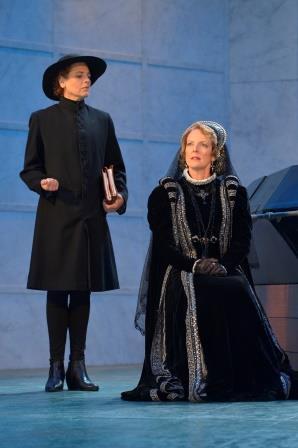 The only exception to the fun, of course, is the priggish Malvolio (who gets subjected to the ridicule he deserves). 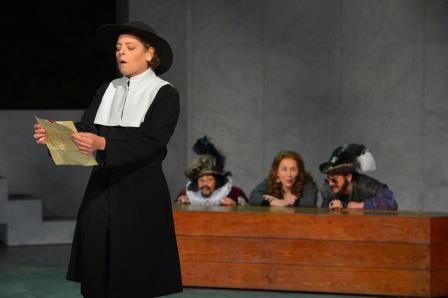 Elsewhere in the cast, Julie Eccles was a deliciously mournful Olivia whose heart starts to flutter for the man she thinks is Cesario (but who, in fact, is Viola in male drag). As Feste, Ted Deasy opened the production by climbing out of a coffin, hilariously taking on a variety of jester's guises and eventually crawling back into his coffin in time for the audience to head home. 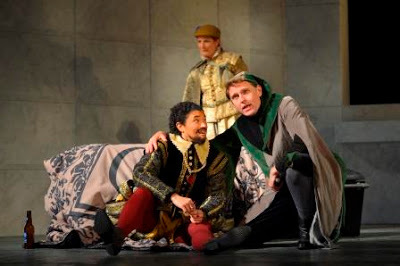 There are two burning reasons to see Beautiful Something, a new film written and directed by Joseph Graham that was screened at the Frameline 39 Film Festival. They are a handsome young actor named Zack Ryan and the cinematography by Matthew Boyd.

But that's not what's happening. It turns out that Brian (a struggling 22-year-old poet who is down on his luck), has a bad track record with men. A hardcore romantic who loves nothing more than a good kissing session, he's willing to settle for casual sex with a desperate, guilt-ridden closet case he encounters in his favorite bar or a quick pickup in a back alley. Nor does he hesitate to wake up an old flame (who is now involved with a woman) and climb through the man's bedroom window in the middle of the night hoping that a conversation with Sergio (Matthew Rios) might reignite a passion long gone.

Brian subsequently hooks up with Jim (Zack Ryan), an irresistibly beautiful young man who is well practiced in the art of seduction. After leaving Brian alone in the alley temporarily, Jim returns and guides him down a stairway to the basement of a seemingly abandoned building where various pieces of sculpture line the hallway.

In truth, Jim (who aspires to an acting career) has been in an open relationship for several years with Drew (Colman Domingo), an African-American sculptor of international renown. Older (and definitely more mature) than Jim, Drew is a passionate lover who knows what he wants and is secure in his feelings for the young and restless beauty he looks to as his muse.

The other mature figure in Beautiful Something is a 60-ish talent agent from Los Angeles named Bob Williams (John Lescault) who has been cruising the streets of the gay ghetto in a white stretch limousine. After Jim finishes having sex with Drew (and then Brian), he ends up spending part of the night with Bob before heading back home to the physical warmth and emotional safety of Drew's embrace. Others in the cast include Peter Patrikios as Brian's friendly bartender and Carlo D'Amore as Tony (a local drug dealer who is attracted to Brian). 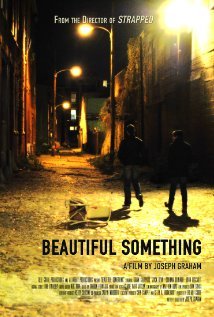 Poster art for Beautiful Something

With the exception of Drew, all of the characters in Beautiful Something are searching for something that seems just out of reach. Often they'll settle for a quick fuck or fleeting moments of male companionship.

Graham's well-directed film may surprise some viewers with its gruff intensity. But it's definitely worth seeing for Boyd's beautiful cinematography and the way the camera makes love to Zack Ryan.