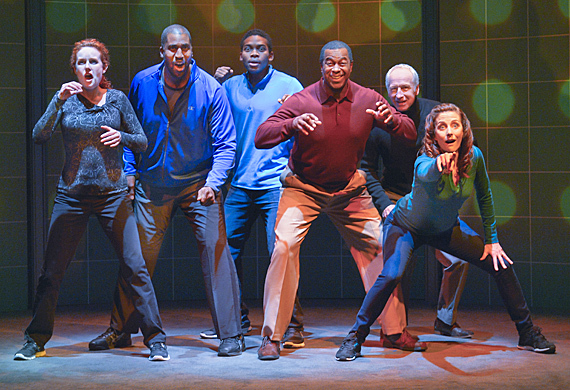 The course of ardent love needs to involve pain, and sometimes even agony or tragedy, doesn't it? That's the formula in theater, if not always in life.

In X's and O's (A Football Love Story), the high-energy drama that's receiving its world premiere at Berkeley Rep, such affection and emotions revolve around an institution that commands American attention like few others: professional football. It's a fact-based narrative, crackling with far more heartbreak of disaster then thrills of victory.

The play was written by KJ Sanchez, who calls herself a superfan, and Jenny Mercien, the daughter of a Green Bay Packers running back who is still remembered as the hero of the famed "Ice Bowl" of 1967. To supplement their personal knowledge and feelings, the pair drew upon an immense amount of research, including interviews with players, former players, relatives and survivors of players, physicians and fans.

What emerged is a brief history of the game, skimming across the evolution of its structure and rules and skills and equipment, and landing squarely on a phenomenon that had gone unnoticed or ignored until the past decade or so: the delayed traumatic effects on the brain caused collision after collision throughout a career in football.

Called chronic traumatic encephalopathy -- CTE for short -- the condition affects memory, personality and the ability to function, and on occasion leads to suicide.

The disorder is described with vividness and fervor by a neurosurgeon (Marilee Talkington, in one of several effective and affecting roles). To support her words, she points to projected X-rays of damaged brains, which bear an unmistakable resemblance to those of Alzheimer's victims.

Sanchez and Mercien did their best to come up with a balanced narrative, giving lovers of football a fair chance to display their intense engagement, whether in a stadium or staring at the big screen in their favorite sports bar. But it's clear that the writers' sympathies lie with the young men whose lives have been shattered or shortened by the collisions that are central to the game, and with even younger players -- children and teens -- who are prodded and coached and equipped with far less care than NFL pros. 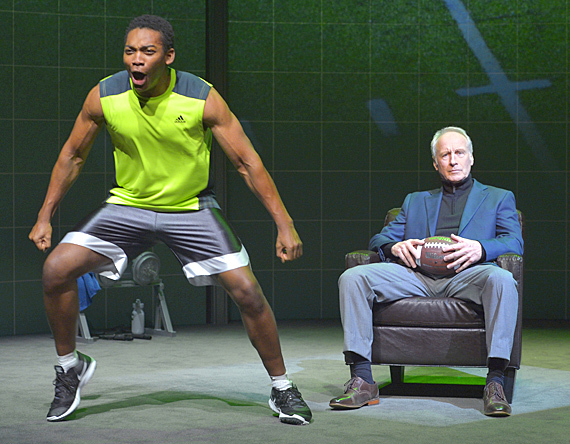 Why the game has long since displaced baseball as America's favorite spectator sport is impossible to say with assurance. But the play suggests that the multi-billion-dollar enterprise it has become, thanks to TV and newer media, make it likely that the game will maintain its status and allure well into the future.

(Let me interject here that the structure of X's and O's won't be found in any standard description of a "play." Rather than progressing from a starting point to some logical conclusion, it consists of short, frequently powerful and informative episodes, and ends where it began, with the full cast miming the intense glee and agony of fans watching a game.)

The ensemble that covers the dramatic spectrum includes four men and two women, all filling multiple roles with great skill. In addition to Talkington, there are actors Bill Geisslinger, Anthony Holiday, Eddie Ray Jackson and writer/actress Mercein, who come to the show with backgrounds as lifelong performers. One actor, however, didn't turn to the craft until his 30s. That's Dwight Hicks, who played in the Pro Bowl four times and the Super Bowl twice with the '49ers before moving into the physically safer realm of entertainment. On stage, as on the field, he's a pro.

Tony Taccone directed, pulling the fragments into a smoothly flowing whole that makes its points without ever becoming preachy, and reaches into remembered lives with sympathy and poignancy.

For anyone who can't make heads or tails out of the title, X's and O's are symbols used to chart plays in football. Berkeley Rep's program contains an extensive glossary that explains the basics, but the drama might make you wonder why anyone would accept the game's risks ... or allow his or her children to do so.

In an intriguing coincidence, the topic of CTE surfaced in the news a few days ago, based on a new study that was reported in sites ranging from ESPN to newspapers across the country. Here's a link to the actual report, written by and for the science-minded ( espn.go.com/pdf/2015/0128/otlBUfootballstudy.pdf ) and another written for general audiences ( nytimes.com/2015/01/29/sports/football/study-points-to-cognitive-dangers-of-tackle-football-before-age-12.html?_r=0 ). They make good reading, and give a special power and resonance to the play.