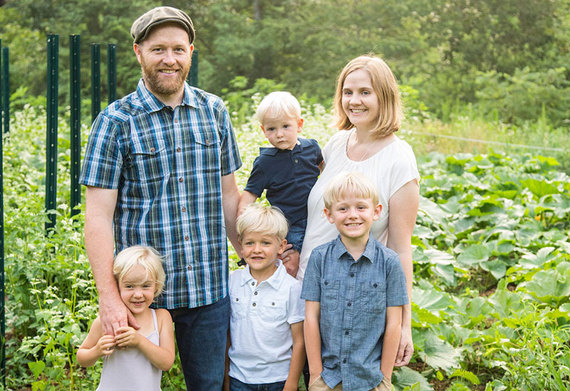 This past May, Justin Rhodes, a North Carolina homesteader and vlogger, decided to take on a challenge: He would spend the next 100 days trying to grow and raise as much of the food his family of six eats.

"I wanted to do this for myself, but also to inspire and encourage other people, and show them that [living off the land is] easier than you think," says Rhodes in a phone interview with Modern Farmer. "It's just about getting up and doing this. Look what you can do in just 100 days. It doesn't have to be this unattainable thing."

For the last decade, Rhodes has been homesteading on eight acres in Fletcher, North Carolina. He and his family raise turkeys and chickens (or "dinos" as he's dubbed them) for meat and eggs, and they typically source about 25 percent of their food from the farm.

Rhodes, who calls himself a "the apron-wearing, permaculture chicken-ninja master" felt they could increase that percentage pretty dramatically and slash their food bill at the same time. But before he began, he set a few ground rules: only 10 hours a week could be spent producing the food; this way Rhodes could prove that it's doable to live off the land while also working a full-time gig. (Rhodes writes and produces videos for a living.) He notes, though, that he spent a little more time in the beginning prepping, and then less when seeds were in the ground and the chickens had grown.

Rule number two (or really more an allowance, if you will): The family could consume a few grocery-store items, like condiments, dairy (they have a cow, but this was her dry season), and tea with honey. After all, Rhodes didn't want to make the challenge an "unglamorous, torturous thing," he says.

The challenge started off slowly. When they began in May, the family was still getting seeds and seedlings into several small plots on less than a half-acre. They planted a wide variety of vegetables, including tomatoes, potatoes, corn, squashes, and greens. They'd also just received their 75 broiler chicks, who arrived a tad early, as you can see in the video below. But by June, midway through the 100 days, the chickens were ready for slaughter and some of the vegetables were ready to be picked, so the grocery-store supplements slowed. By the last month of the challenge, which ended August 13, Rhodes estimates that 75 percent of the food he consumed was what he grew or raised.

Plus: How to Raise Chickens for Farm-Fresh Eggs

The kids and Rhodes' wife, Rebekah, didn't participate quite as much, but still not bad: He estimates about 65 percent of their food came from the farm. There were some meals the "chiddlers," as Rhodes calls his kids, just weren't into: dehydrated cucumbers, for one, as well as a chicken-and-veggie stir-fry they quickly tired of. (By day three of having that for dinner one of Rhodes' sons told his dad eating it was his "worst nightmare.") But generally, Rhodes says, the kids happily ate veggies from the garden, especially when they grew and harvested them.

Rhodes admits there was some stumbling blocks, like the time a snake ate one of their chickens whole (and yes there's video evidence of that happening, if you have the stomach to watch it). "There will always be some problems," he says, "you just have to get seeds in the ground and buy some chicks, and if some them die and some seeds don't make it, just buy more and keep on going. Learn from it."

Plus: Social Media for Farmers 101

Now Rhodes is gearing up for winter. Of the 75 broiler chicks they got in May, 65 lived to slaughter size and provided more than a year's supply of meat for the family. Plus, he plans to preserve much of the summer harvest to last through the cold months, and is readying root vegetables. "Gosh, I wish you could see my porch. We have pumpkins, winter squash, acorn squash, butternut squash, spaghetti squash, cucumbers," Rhodes says. "It's ridiculous. I made the investment during those 100 days in being able to feed myself for a really long time. We just encourage people to do what you can and that's what we showcased, the easiest things to do: meat chickens, laying hens, and annual vegetables."

For videos from the entire 100-day challenge, check out Rhodes' YouTube channel.

More from Modern Farmer:
Meet a Woman Who Keeps 500 Plants in Her Brooklyn Apartment
The Healing Garden: How to Grow 7 Medicinal Herbs at Home
Bison vs Buffalo: What's the Difference?
Meet the Woman Who Runs NYC's First Commercial Farm in a Residential Development
Never Buy a Teacup Pig