In the world of international development, 2015 has been a sort of Holy Grail. In 2000, the Millennium Development Goals were agreed. We were going to halve poverty; cut child mortality by two-thirds; ensure that 80 percent of the world had safe water -- all by this magical date.

For at least the last five years, reality has forced us to begin to talk about, "beyond 2015", because we know this year will not fulfil all our hopes.

For the water, sanitation and hygiene sector, 2015 is an "almost, but not quite", date. The world did reach the water MDG -- in 2010, in fact -- but that still leaves 750 million people without this most basic of services. More people than ever before are reaping the benefits of better hygiene practices, such as handwashing with soap. We can almost see the light at the end of the tunnel.

But obscuring our vision is a huge pile of... feces. 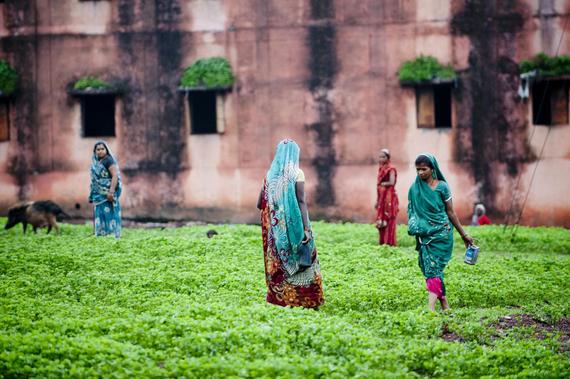 Indian women carry jars of water as they head out to defecate in open on the outskirts of Guna in Madhya Pradesh (c) UNICEF, 2013

Approximately 2.5 billion people, more than one-third of the global population, don't have a way to defecate safely. Some 1 billion of these simply go in the open, and the rest use inadequate toilets. And the resulting contamination of the environment threatens the gains on child mortality, health -- on many aspects of life.

I think there are three must-haves that can make a world of difference with the sanitation problem.

When it comes to customs and practices, we all do what we believe others expect of us. So we need a social movement to make open defecation unacceptable - everywhere it is practiced, from Brazil to Zambia. Then, communities and their leaders -- with a little support from outside -- can more quickly bring about social change. We know it can be done. Ethiopia for example, halved the rate of open defecation between 2000 and 2012. Bangladesh has reduced it to 3 percent. But this requires investment in the systems that trigger wide-scale behavior change -- be it through health workers, community-based organizations or traditional leaders. Recent news that the government of India is prioritising sanitation is incredibly encouraging, given the sheer scale of the challenge there. If this is done in a way that prioritises and invests in behaviour change, we know it can work.

Behaviour change creates the demand for sanitation products and services, but, most often, few products or services are accessible to the poor. Getting a good quality, but inexpensive toilet is not easy for people without means, so they have no choice but to keep using unsafe and unsanitary toilets, and to wait until they can afford the expensive models available. But I have seen in Myanmar, for example, people delivering squatting pans that cost as little as $2 to households. These are products that are available on the local market. However, in too many countries, if you can't pay $300 or more -- and few can - -you will only have very rudimentary facilities. So, the private sector has a clear role here -- to develop the products and services that poor people want and can afford. There is a huge gap in the market -- and the size of the market is potentially 2.5 billion people.

Politics matter. Changing behaviour and engaging the private sector requires action from governments. It is government investment in systems that can deliver wide-scale behavior change -- be that in existing health workers, or in utilizing traditional community leadership structures. Or governments can even create new systems. And it is the government which can connect poor people -- who want toilets -- to the local private sector, and help make these products and services affordable to the poorest.

In the end, despite all the progress we have made in other areas over the last few decades, sanitation is a reminder of how so little has changed for so many. But ours should be the last generation in which large numbers of our fellow citizens lack something as basic as a place to go to the toilet.