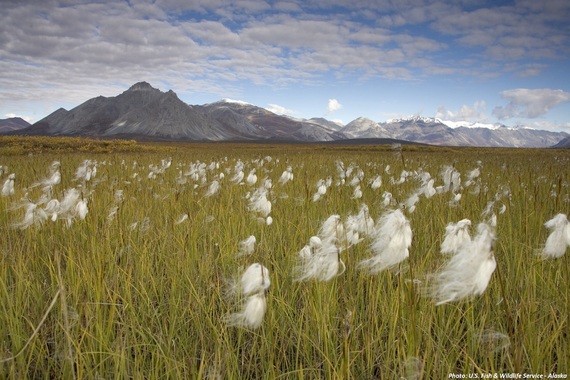 They say "everything's bigger in Texas," but whoever "they" are didn't travel far enough north. At more than 660,000 square miles, Alaska is the largest state in the union...by far. It boasts the most tidal shoreline -- nearly 34,000 miles worth. It is home to Denali, the highest mountain peak in North America. Minnesota calls itself the "Land of 10,000 Lakes" -- Alaska has more than three million. If things are "bigger" in Texas, things are often "biggest" in Alaska.

And yet, as of the most recent census estimates, Alaska's population is a modest 735,000, ranking it 47th in the country. Combine that with its sheer size, and Alaska ranks at the bottom in terms of population density. Which brings us to another fact about America's Last Frontier: Alaska is wild. Really, really wild. Gloriously, magnificently, wonderfully wild. It is the American West as the American West once was -- simply replace the bison that once roamed the grasslands of North America with herds of caribou as far as the eye can see.

Fifty years ago on September 3, 1964, President Lyndon B. Johnson signed the Wilderness Act into law. As we celebrate the 50th anniversary of this landmark legislation, it's not so crazy to think of Alaska as America's Wilderness. The Wilderness Act was the product of an effort to set aside 9.1 million acres of wildlands for the use and benefit for the American people. It fashioned the legal definition of "wilderness" and upon its signing, prompted President Johnson to remark: "If future generations are to remember us with gratitude rather than contempt, we must leave them a glimpse of the world as it was in the beginning, not just after we got through with it." Today, the Wilderness Act's text remains as beautifully concise and poetic as it was 50 years ago:

A wilderness, in contrast with those areas where man and his own works dominate the landscape, is hereby recognized as an area where the earth and its community of life are untrammeled by man, where man himself is a visitor who does not remain.

Let's not stop there, however. There's Denali Wilderness, which happens to include the majestic mountain Denali -- at 20,320 feet Denali is the highest point in North America and the tallest mountain on Earth when measured from base to summit. Then there's Katmai Wilderness located on the northern Alaska Peninsula. This wilderness area is part brown bear stronghold, part volcanic laboratory -- today, 15 active volcanoes line Shelikof Strait, which separates Katmai from Kodiak Island. Katmai contains the world's largest protected brown/grizzly bear population, estimated to be about 2,200. And speaking of bears, Kootznoowoo Wilderness, located within the Admiralty Island National Monument in the Tongass National Forest, contains the highest concentrations of brown bears in the world! Its name comes from the indigenous Tlingit people, and means the "Bear Fort" or "Fortress of the Bears."

These are just a handful of the amazing wilderness areas in Alaska, but there is still work to be done to protect special areas that remain threatened. Many of the same threats to our public lands 50 years ago still exist: mining, logging, development, roads and other infrastructure. Plus, we've gone ahead and added a few like climate change, fracking and commercial development. The same tug-of-war between development and preservation that led to the passage of the Wilderness Act exists to this day. Every generation of Americans faces moments when we must choose between the pressures of the now and the hopes for the future.

The Arctic National Wildlife Refuge in northeast Alaska provides crucial habitat for some of our most beloved species of wildlife, including caribou, polar bears, grizzly bears, musk oxen and much, much more. The Refuge is a sweeping landscape, bursting with wildflowers and framed by the awe-inspiring Brooks Mountain Range; it is unparalleled throughout the world. It is wild, it is spectacular and it belongs to all Americans. And yet, its very existence remains under constant threat from outside interests that want to plunder it for short-term profit from oil.

Our goal has always been to obtain the strongest possible protection for the Arctic National Wildlife Refuge and its biological heart, the Coastal Plain. The Arctic Refuge represents our nation's finest example of intact, naturally functioning Arctic and subarctic ecosystems, and by designating its Coastal Plain as Wilderness we can finally silence the calls to "drill, baby drill" in this amazing place and instead preserve its unique wildlife and wilderness.

There is both bipartisan and overwhelming public support for placing the Arctic Refuge off limits to oil and gas development, so in this, the year we celebrate the 50th anniversary of the Wilderness Act, it's time to do all we can to advance Wilderness for the Coastal Plain of the Arctic Refuge. Like Yosemite, the Grand Canyon and all the majestic lands protected by proud generations before us -- the Arctic Refuge and other special areas must be here for future generations to enjoy.