Rio de Janeiro has one of the most vibrant musical scenes on the planet, and includes both the incredible street celebration of Carnaval and a multitude of nightclubs for all tastes. Cariocas (natives of Rio) are generally gregarious, love music and aren't shy about dancing, and the city's nightlife is dynamic. Many of the hottest music spots are in the historic neighborhood of Lapa, a once neglected area that has been transformed into a musical mecca. Rio is associated with the birth of samba, choro and bossa nova, and its clubs offer lots of other styles as well.

In terms of music, there are many Brazils. Samba is the most famous musical genre and it comes in several varieties. Its infectious rhythms can make anyone get up and dance, yet one can also enjoy it in folksy pagode samba jam sessions with musicians and listeners seated around a table crowded with cold beer. For mellow evenings, there is sophisticated, subtle bossa nova (think Tom Jobim and João Gilberto), the instrumental pleasures of choro (usually played on acoustic guitar, flute and cavaquinho), and a wide spectrum of Brazilian jazz.

MPB mixed strong melodies, rich harmonies and eclectic influences beginning in the 1960s and '70s and is still going strong (Milton Nascimento, Gilberto Gil and Caetano Veloso are mainstays). A new generation of female singer-songwiters (Ana Carolina, Bebel Gilberto, Maria Rita and others) are creating much of the best MPB these days and mixing it freely with international pop.

You can go rural and romantic with the sertanejo genre, the local country music that is now the country's most popular style. Or you might want to get down with funk carioca, raw and provocative dance music from the favelas, or Brazilian rap, Electro or Brazilian rock. Musically, there's something for everyone. I give descriptions of Brazil's different styles and leading artists in my books The Brazilian Sound (an introduction) and The Brazilian Music Book (a collection of interviews).

Here is a listing of ten memorable venues in Rio, mostly in Lapa, Centro (downtown) or the Zona Sul (South Zone). Call to confirm what style is playing and when the music starts, or ask the concierge at your hotel to call for you. The O Globo newspaper also has listings. Some clubs close on Sundays and Mondays. Most of these establishments have cover charges, usually the equivalent of U.S.$5 - $20, and expansive menus of great food.

Lapa and Centro have more than their share of crime. Take a taxi or Uber to your club and take one back to your hotel. Don't wander far from your destination, unless you know your way around and are in a group. 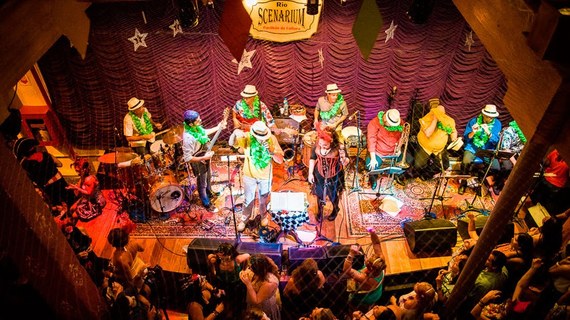 1. The picturesque Rio Scenarium has atmosphere to spare: the beautiful three-story club has exotic antiques, masks and costumes as décor. The live music features samba plus jazz and MPB. One can shake it to samba on the first floor or watch the action from a grand balcony while enjoying a potent caipirinha or cold Brazilian beer. Open Tue-Sat.
Rua do Lavradio 20, Centro (close to Lapa); 3147-9000/9001/9002
http://www.rioscenarium.art.br (Portuguese/English)

2. The Vinicius Show Bar is an inviting spot devoted to the sublime, mellow sounds of bossa nova and named for poet/lyricist Vinícius de Moraes, who teamed with Tom Jobim on classics such as "A Garota de Ipanema" (The Girl from Ipanema") and helped inspire and popularize the genre. One might also hear a little MPB or samba on some nights. Open Sun-Sat.
Rua Vinícius de Moraes 39, Ipanema; 2287-1497 / 2523-4757
http://www.viniciusbar.com.br (Portuguese/English)

3. Carioca da Gema arrived in Lapa in 2000 and helped start the revitalization of the dilapidated neighborhood. The small, intimate club boasts beautiful brickwork and a grand hardwood staircase, and hosts some of the top names in samba, as well as musicians from other genres (jazz saxophonist Léo Gandelman often teams with various vocalists). The place is packed on weekends; Monday is an especially good time to visit. Open: Mon-Sat.
Avenida Mem de Sá 79, Lapa; 2221-0043
http://barcariocadagema.com.br (Portuguese)

4. If you blink you might miss the tiny Bip Bip bar, which is located close to Copacabana Beach and is a fun place to catch pagode samba played casually around a table. Greats like vocalist Beth Carvalho sometimes stop by for samba on weekends. You can catch choro on Mondays and Tuesdays, and bossa nova on Wednesday night. Open most nights.
Rua Almirante Gonçalves 50, Copacabana; 2267-9696

5. Fundição Progresso is a larger space where well-known musicians play everything from MPB to rap to reggae to sertanejo.
Rua dos Arcos 24, Lapa; 3212-0800
http://www.fundicaoprogresso.com.br (Portuguese)

6. Estudantina Musical is a landmark for those who love ballroom dancing to the sounds of samba, forró and other Brazilian styles.
Praça Tiradentes 79, Centro; 2232-1149

10. Astrophysicists who love to party or just those who like exotic nightspots should check out 00 (Zero Zero), an upscale spot housed inside Gavea's planetarium. There's a lounge, a dance floor and a mezzanine level where you can enjoy sushi. Live musicians and DJs play everything from samba to MPB to electro to reggae and jazz. Sunday is a gay afternoon/night. Open: Tue-Sun.
Planetário da Gavea, Avenida Padre Leonel Franca 240, Gavea; 2540-8041

For more information about Brazilian music, my books The Brazilian Sound: Samba, Bossa Nova and the Popular Music of Brazil and The Brazilian Music Book can be accessed at Amazon or through my blogs:
thebraziliansound.blogspot.com
brazilianmusicbook.blogspot.com