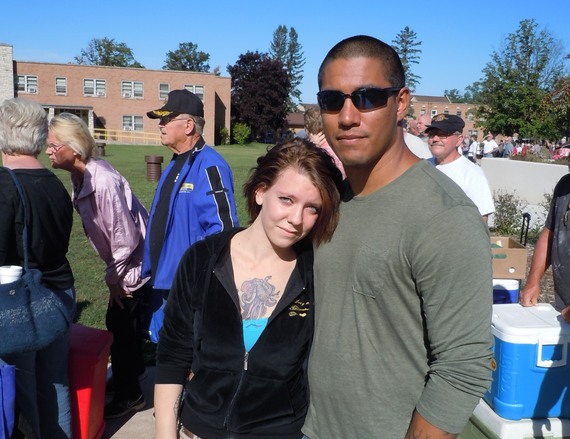 The Alba family is just one of an estimated 620,000 military households seeking help from the Feeding America network.

On the morning of Sept. 3, Jon and Elizabeth Alba waited two hours at the VA Medical Clinic in Iron Mountain, Mich., not for medical care but for a few days' supply of groceries. Feeding America West Michigan Food Bank was distributing more than 40,000 pounds of food in what would be their single largest Mobile Food Pantry. Some 2,700 veterans and their family members were served that day.

Jon, an infantryman, completed his contract in January. Elizabeth was released from her contract as a combat medic in February after discovering that the stress fracture in her hip required surgery. Since then, with a mixture of creativity and tenacity, the Albas have managed to scrape together a living, but it hasn't been easy, especially since the couple is now responsible for Elizabeth's 17-year-old brother. They gained custody of him after it became clear that his dad, an Iraq War veteran, was no longer emotionally stable enough to care for him.

According to a recent study, Feeding America provides food to 620,000 households with at least one member currently serving in the military, while 20 percent of all Feeding America households include a veteran or current servicemember. 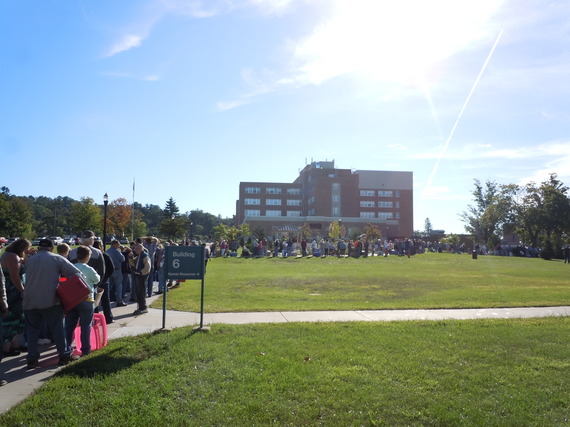 The Albas met in Texas, where they were both stationed. It was a broken-down motorcycle and a pickup truck that brought them together.

Jon, a native Texan, was an infantryman with the 1-124th Cavalry Squadron in Waco, Texas. Elizabeth, raised in Michigan's Upper Peninsula, enlisted at 17 and was stationed in Wylie. She was driving her truck one day when she spotted a guy standing on the shoulder of the road next to his bike looking forlorn. Something of a motorcycle mechanic herself, she decided to stop and help him out.

"On the way back to his place, we started talking and I found out he had just got back from Fort Bliss for training," Elizabeth said. "I told him I was in the military, I was a combat medic. We were in the same battalion."

The couple got married last year and moved to Escanaba to be near Elizabeth's family. While jobs are scarce in Michigan's Upper Peninsula in general, they've learned that Army training doesn't necessarily translate into civilian work as easily as recruiters claim.

"I was a door-kicker. That was my job," Jon said. To become a police officer, an occupation often held up as a good option for soldiers, he would need an additional two years of schooling.

Like many soldiers his age, Jon saw combat. Unlike most, his unit wasn't sent to Iraq or Afghanistan, but into the turmoil of the drug war along the U.S./Mexico border.

"I don't ask him about it because he gets kind of spacey. They lost a couple people over there," Elizabeth said.

In addition to Elizabeth's stress fracture, for which she's still awaiting treatment, she sustained a head injury at Fort Jackson that causes her to black out, putting many of the jobs she's qualified for out of reach.

"No one wants me to work for them with my passing out and my hip, and Jon, no one wants to hire him when there's a loud noise and he's hitting the dirt."

So they got creative. Elizabeth taught herself to read Braille and now transposes books for the visually impaired. Jon is teaching mixed martial arts at a gym in Escanaba, along with a self-defense system he developed himself. 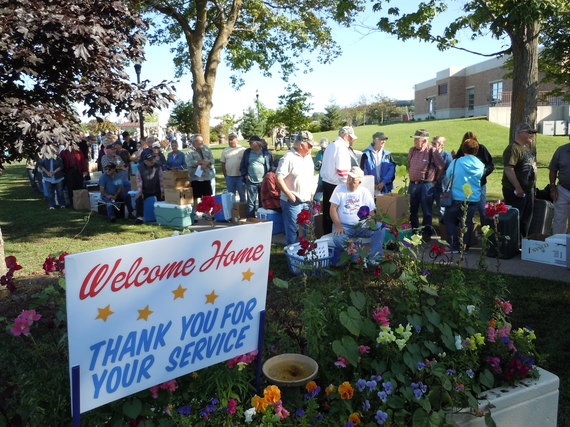 While the Albas have managed to find jobs, many of their peers haven't. According to the Bureau of Labor Statistics, 21.4 percent of veterans aged 18-24 are unemployed, while only 46 percent of veterans with a service-connected disability are in the labor force.

"It's hard. It's a hard sacrifice," Elizabeth said of their service. "It's not only a sacrifice for us. It's for our family, for our health."

Asked whether they would enlist again if they had the chance, Elizabeth is confident in her answer: "Yes, but only for one reason and that's for my country."

With a hopefulness tempered by realism, the Albas are determined to make things work. Jon says they try to live by the same principle he teaches his students: "If it means something to you, you'll make time. If it means nothing, you'll make an excuse."

"We're doing what we can with what we have."