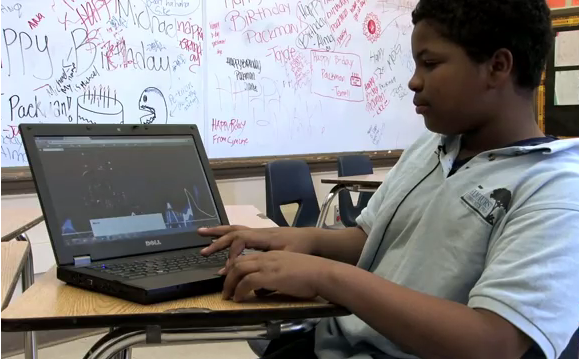 For schools in low-income communities, the idea of investing money, time, and energy into a digital media program or mobile-learning program might seem superfluous. Administrators and teachers already have so much to contend with -- safety issues in high-crime communities, chronic student truancies, debilitating health issues due to poverty, families in a constant state of flux, not to mention blocked access to wide swaths of the Internet.

In those cases, investing precious dollars or the attention of already overtaxed administrators seems unlikely.

But what if some of these very issues could be solved by creative ways of using digital technology in schools? That's the argument coming from S. Craig Watkins, author of The Young and the Digital: What the Migration to Social Network Sites, Games, and Anytime, Anywhere Media Means for Our Future, and a professor of sociology, African American studies and radio-television-film at The University of Texas at Austin.

"My concern is that as schools are now struggling with budget cuts, digital media and digital literacy is looked as a luxury as opposed to a necessity," Watkins says. "I understand the enormous pressure that teachers and administrators are under, especially in the public school system. But we need to build a more compelling narrative that digital literacy is no longer a luxury but a necessity."

Watkins points to research from the recent Horizon Report, as well as the pilot study with Project K-Nect, which clearly show the benefits of engaging students (even those considered "at-risk") through mobile phone programs and curriculum.

"They're already seeing the potential of mobile devices in science, art, and math classes," Watkins says. "So it's no longer a theoretical conversation -- it's already happening, but only in 'islands of innovation.' The real challenge is, are those opportunities to encounter those types of learning being evenly distributed?"

Probably not, he says. So even though studies have shown that kids in communities that are considered marginalized are actively online with their mobile phones, and we're seeing plenty of evidence showing the benefits of mobile technologies in learning, the discussion around the achievement gap gets pulled back into the "no money" conversation.

Beyond just allowing kids to use their mobile phones in schools rather than telling them to shut it off -- which is already a blasphemous idea in most schools -- Watkins argues in a recent article on his blog that at-risk students need to be taught how to use these important tech tools beyond just texting and posting updates on Facebook.

"The educational environments that will thrive, the ones that will be the most innovative, and the ones that have most impact will be the ones that create opportunities for kids to create digital media literacies that we all recognize as important and that have social implications, educational implications and civic implications, as well," he says. "So we have to equip kids with skills that help them not just to consume, but to become architects of their information environment and that requires different skills in using mobile devices and using the Internet."

Watkins witnessed the powerful impact of helping low-income kids use technology to create digital tools that are directly relevant to them: A group of high school students who were charged with designing a playable game about green technology and green architecture.

"Every single day during one of the hottest summers on record, they showed up enthusiastic, and with very little involvement from teachers, created this game," he said. "The whole project was student-centered, totally collaborative, and it was pretty incredible to see."

But could a short-term, summertime project result in any kind of lasting impact on these kids' lives after the project is over?

"For some, it will ignite passion for learning that will translate to the formal learning space," he says. "They felt like it was a powerful experience and one they could take with them into other endeavors. It gave them confidence, self-efficacy as learners. They felt like they'd developed a new skill, but more broadly, it influenced their disposition towards learning and as learners."

All of which points to the importance of teaching students how to create content -- not just consume, play with, or pass along to friends.

In continuing his work in this realm, Watkins is working on a number of initiatives.
Advertisement

Read more about how technology has the potential to close the digital divide on MindShift.