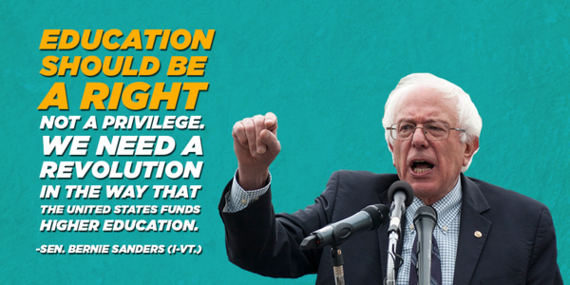 Democratic presidential candidate Bernie Sanders proposes free tuition at public colleges and universities in his "College for All Act." Who wouldn't welcome that? For most Americans the cost of four years of college is prohibitive. It excludes capable students who simply can't afford tuition. It forces others to carry suffocating debt that will plague their lives and limit their spending for decades. Outstanding student debt ballooned to an astonishing 1.27 trillion dollars in 2015.

While the public applauds Bernie Sanders's proposal, many people are shaking their heads and contending that "free tuition is unrealistic and will never happen." This skepticism has a solid foundation. If we can't get a national minimum living wage of fifteen dollars an hour that would lift millions of Americans out of deep poverty, how will Sanders persuade Congress to outlay forty-seven billion dollars and states twenty-three billion dollars each year to pay for free public college education?

But Bernie Sanders isn't shaking his head. Free tuition at state colleges is a centerpiece of his campaign. And despite public skepticism, he promises that President Bernie Sanders will fight for his plan. He makes the strong argument that many states provided free college education during the Great Depression-- and continued free through the 1960's. Bernie Sanders himself was the beneficiary of free college in New York City. So was I, along with many of my friends and professional colleagues. So why not now for the wealthiest nation on the planet? Sanders asks.

An equally important question is: Why are these other nations providing free college education? For them it's not a perk or a giveaway. It's the best way to assure that they have a workforce that can compete effectively in the twenty- first-century global marketplace.

While the United States is understandably focused on national defense to fight terrorism and protect Americans from threats, we must not forget that national defense is more than military defense. The decline of the middle class, the increased numbers of poor and poorly educated Americans, and the rise in homelessness, combine to make building a strong workforce a challenge. Consider too the significant demographic changes that we face. Americans are marrying later--many not at all--leading to the prospect of a continuing decline in the national birth rate that will accelerate as we curtail immigration. Add to that the growing ranks of the elderly with ever increasing life expectancy. And despite pressure for people to work longer and harder, it's not likely our workforce will swell significantly by adding seniors to its ranks. These demographic facts tell us that the United States will need every able-bodied and educated American to maintain its prosperity and its leadership in the world.

The legislative paralysis that has marked this past decade of American politics does not bode well for the prospects of free college education happening soon, even if Bernie Sanders wins the presidency. Without Sanders, the prospects are even dimmer.

That's why we need immediate entree for students who can't afford college while Bernie Sanders fights for free tuition for all at public institutions. And there is a way to do it.It's based on a current proven model that doesn't require government approval or support. That proven model is online interactive education provided by volunteer retired college professors and retirees from other domains.

I have direct experience with this model. Like many other programs around the country, New York City's Center for Learning and Living (CL&L)--of which I am a founder and director--provides low-cost educational programs staffed by retired volunteers. CL&L focuses on education for adults age 55-plus, but there's no reason such a lifelong learning program can't easily be adapted to a degree-granting college education.

When CL&L was proposed at Marymount Manhattan College in 1992, we wondered if we could recruit high quality volunteer retired teachers. But we needn't have worried. A few newspaper ads, personal contacts, and word of mouth drew impressive world-class faculty from some of the leading universities as well as other outstanding professionals from the arts, the corporate world, and government. Occasionally, even younger teachers volunteered. Twenty-three years later we still draw teachers who any university would be proud to have on their faculties.

CL&L charges a modest fee only because it pays for its physical facility and some technical support now that we are administering the program independently. An online program would eliminate that cost. For the $255 fee students can take one or all nine courses in each of the three cycles or semesters. A far cry from the $4,000 or more that many colleges charge for a single 3-credit course.

Colleges throughout the world are giving online courses for credit as part of their regular curricula. Many of these are not free because they pay their professors. Using volunteer teachers would eliminate that cost. And education experts say that pervasive online education is the future of education.

For qualified students who can't afford college the future is now.

Online interactive education has the advantage that teachers and students can reside anywhere. It eliminates costly physical buildings. The online feature will have great appeal for retired teachers, since they would not have to travel to a school building. And I can foresee senior volunteer teachers flocking to the worthy cause of opening a window of opportunity for the disenfranchised, for whom the outrageous cost of a college is an insurmountable barrier.

Would volunteer teachers take jobs away from young teachers seeking employment? Not at all, since the students in the free program would not otherwise be attending college.

Added bells and whistles would make this internet-driven program equal to or even better than a traditional college education. For example, online instruction could be supplemented by other senior volunteer teachers meeting locally with individual students for one-on-one and small-group discussions, interactions, and mentoring --much like the work of teaching assistants but more skilled. These meetings could take place in donated facilities such as store fronts, banks, drug stores, malls, and other sites. Companies like Boscov's already offer free space for public events. Surely other businesses and organizations would do likewise to join the national campaign to ramp up American higher education

There's another big plus for this comprehensive free college-education program. It would harness the knowledge and abilities of seniors. We often pay lip service to the wisdom of age but we rarely tap the reservoir of senior talent. Indeed, politicians who propose cutbacks in programs for the elderly characterize seniors as takers not makers. In delivering free college education, senior volunteers will not only challenge their stereotyped image, they will show they can contribute productively to GDP by helping prepare America's twenty-first-century workforce.

The proposal I've sketched is a bare bones structure. Myriad details remain to be worked out. But the program is sound and doable.

Keep in mind that great nations have not fallen because they lost military battles. When the "barbarians" stormed into Rome in 410 CE, they met no resistance. Defense and social order had collapsed due to internal decay of Roman society. Many explanations for the fall of the Roman Empire offered by historians have frightening resonance with today's America: conflict among different factions leading to neglect of public needs, taxation that widened the gap of rich and poor, constant wars and military overspending, government corruption and political instability, harsh treatment of migrants, and the increased role of religion in politics.

Looking at the big picture, in the twenty-first century education may be as vital to national defense as military defense. If that is the case, then free college education should not be a question but an answer. The only real question is: do we have the courage and will to implement it? If we do, it's possible now.

I hope Bernie Sanders will lead the charge.

Note: You can learn more about my proposal for free college education in this earlier video in which I was interviewed by former WNBC TV News producer and writer Rita Satz.