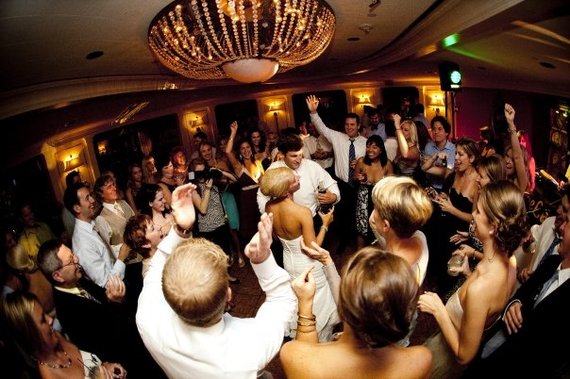 My husband and I have been married for six years and have attended nearly forty weddings since our own. Some were big and some were small. Some were destination weddings and others were enormous hometown soirees straight out of Steel Magnolias. Some had bands and others had DJs. Some even had iPods hooked up to speakers. Some were first marriages and others were second. Some of the weddings involved May-December relationships.

All of them were fun.

While I'm an attorney by day and not an etiquette expert by trade, I've observed a couple guest faux pas in the last few years I'm certain would make Emily Post roll over in her grave. Here are ten of my favorite "gems," what I'd consider big, fat no-no's for wedding guests.

Wearing White. I don't care whether some consider this rule outdated: wearing white, or any light color that even resembles white, is never okay. This is as true for any wedding event, to include an engagement party and bridal shower, as it is for the Big Day itself. The attention should be solely on the bride. If you have even a shred of doubt the dress has too much white, then nix it for something else.

Pointing Out Date Conflicts. Making snarky comments to the bride or groom about their wedding conflicting with football/ basketball/ hunting/ vacation season makes you look like a jerk. Especially if your "involvement" in the conflict is limited to sitting on a couch or at a bar starting at a television instead of actually participating in the event itself. Let's face it, there are only 52 Saturdays in a year and every one of those Saturdays could conflict with something. Unless your watching the event in real time has a direct impact on the outcome, which it doesn't, keep your mouth zipped. If you are that bothered by the conflict, simply don't attend.

Not RSVPing on Time. The RSVP card has a deadline for a reason. It's not to drive the guests crazy or "test" them on their punctuality; it's so the bride and groom have time to calculate the number of attendees, order food, and make seating arrangements. There's nothing that annoys a bride more than having to hunt down people who haven't RSVP'd to determine whether they're attending.

Inviting Your Own Guests. If your wedding invitation doesn't explicitly name your guest, provide a "plus one," or say "and guest," then you don't get to bring a guest. Please don't call the hosts and ask if you can bring a date to their wedding. As weddings are expensive and seating is limited, the bride and groom carefully considered who they wanted to attend their special day before sending invitations. Unless your hosts are du Ponts and cash is no object, nobody wants to pay big money for someone's "Flavor of the Week" date (read: stranger) to attend their wedding. Same goes for young children, who will likely be hogging the dance floor with their silly moves while everyone politely pretends to giggle. Please don't burden the bride or groom by asking if you can bring guests.

Non-Participating Wedding Party Members. As a bridesmaid or groomsman, you are a wedding day ambassador. Absent exceptional circumstances that were cleared with the bride or groom in advance, you are expected to attend all wedding-related events and stay until the end. The bitter end. It's upsetting to the bride or groom watch a bridesmaid or a groomsman standing around with an uninterested look on his or her face or, worse, to be preoccupied by their smart phones. Enjoy yourselves. If you're not enjoying yourself, pretend you are.

Respect the Speeches. No matter how boring or long a diatribe, be quiet and respectful during speeches. This includes the father of the bride speech, maid of honor and best man speeches, and any other toasts the bride or groom designate. The speakers likely put a lot of thought into their speeches, and there's nothing more distracting for the hosts, or the speaker, to overhear guests whispering, laughing, or being otherwise inattentive. It also makes it difficult for everyone else to listen. Try to give your undivided attention to the toastmasters.

Hands-Off the Smartphones. We attended a wedding last year where every single guest at our twelve-person table was glued to his or her phone all night. Considering it was an awesome reception with a talented, lively band, there was no reason for it. I can't imagine anything more frustrating for a bride and groom than to look out at the reception room and observe a sea of people with their heads down, staring at their phones. Sure, some parents need to occasionally check their phones to ensure their babysitter didn't call with an emergency. Otherwise, there's zero reason to be preoccupied by your phone at a fun social event.

Ruining Noteworthy Moments. Don't throw alcohol on the bride or groom or hit them with anything (like a sparkler) as they exit. This is the "money shot" for the photographer and it can be easily ruined by a guest in an ill-fated attempt at being funny. Sure, it might be easy to crop a picture of a sparkler gouging the groom, but it's not so easy to crop the groom's grimacing face reacting to the sparkler. Just don't.

Don't be a "Judgy Joe." Don't shallowly compare weddings or trash talk the bride and groom for "going cheap," their food choices, the bridesmaid dresses, the off-brand liquor, or the fake flowers. Chances are, the hosts spent a lot of time planning the event and, as the wedding industry is arguably a form of legal robbery, they likely drained a small fortune, despite making efforts to cut corners. Have a good time and drink the Popov as if you legitimately enjoy it.

Pointing out Problems. If you notice something appearing "out of sorts" at the reception, don't run and tell the bride or groom. Instead, find the wedding coordinators, a server, or a bartender, and bring it to their attention. The guests of honor don't need anything to worry about while they're trying to savor the moment.

No matter how preoccupied they appear at the wedding, brides and grooms tend to remember rude guests.

Enjoy the celebration, share in the love, get on the dance floor, chow down on the cake, and have a blast.

More:
weddingsEtiquettewedding receptionLove
Newsletter Sign Up
A weekly guide to improving all of the relationships in your life
Subscribe to HuffPost’s relationships email
Successfully Subscribed!
Realness delivered to your inbox