Art has always been present in Eric Trules' life. Throughout his career, he has enjoyed a varied employment history - modern dancer, theatrical director & producer, documentary filmmaker, poet, professional clown. He even ran for Mayor of New York City against Ed Koch in 1977 (as a clown candidate named Gino Cumeezi). He finished fifth out of four candidates. Art and performance have always been somewhere on the horizon. After twenty-nine years of teaching, he is currently a semi-retired "Prof" at USC's School of Dramatic Arts. As an "Associate Professor of Practice," Trules teaches a variety of original and creative classes in self-expression such as "Solo Performance," "Improvisation," and one he is particularly proud of..."Bob Dylan, the 60s and You." An active participant in the 1960s alternative culture, he explained that he "tries to get iPhone-wielding millennials involved in social activism, social justice, and change...just like we did back in the day!" 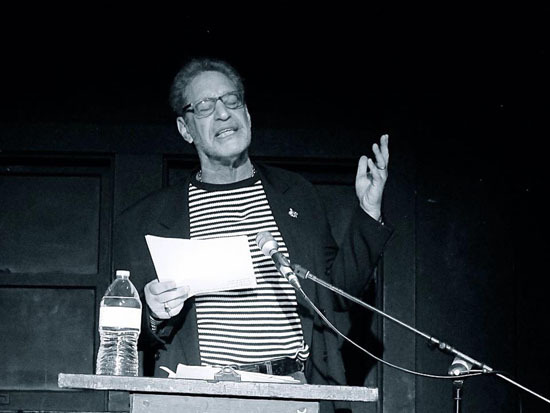 Eric Trules, photo from "AN EVENING WITH ERIC TRULES" 2015, photo by Erik Sandoval

On Saturday, June 6, Trules will be one of the featured poets in Eve Brandstein's POETRY IN MOTION: ALLEN GINSBERG & FRIENDS taking place at Beyond Baroque. Brandstein is another multi-talented individual who has been producing a bi-coastal monthly performance series (Poetry in Motion) since 1988. Trules has known Brandstein for twenty-five years. "I love her," said Trules. "She is a committed and terrific producer!" This past January, Brandstein presented "An EVENING WITH ERIC TRULES" at Beyond Baroque where Trules read a selection of comic and entertaining travel stories.

He was first inspired to do performance poetry by poet friend Michael Lally. "He made poetry seem so prosaic, musical, and accessible. I took to it like a duck to water." For the upcoming event, Trules will be reading a comedic political piece by Ginsberg called "Hum Bomb?" When asked if Trules admired the work of Allen Ginsberg, he replied, "I think he is arguably, along with Bob Dylan, the greatest poet of the 20th century - the Walt Whitman of his time." 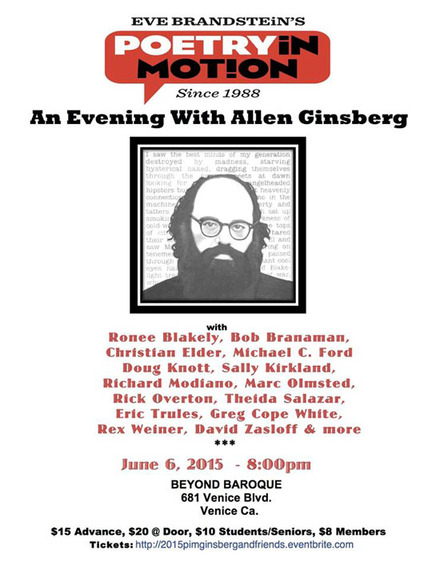 He went on to talk about the importance of poetry in our modern day society, stressing the need for citizens of the 21st century to focus on their humanity through the arts, rather than placing an importance on money, acquisition, and fame. "Theater, from its earliest Greek days, used to be cathartic, telling stories from the tangled web of human emotion and conflict. It offered the audience identification and release," continued Trules. "Who needs action adventure movies with one-dimensional comic book heroes, when our society has so many problems to deal with: international wars, clashes of civilizations, terrorism, broken immigration and transportation systems, a dysfunctional, bought-by-the-rich, unfair political system, income inequality, and so much more? We don't need to 'escape' into the arts. We need to feed ourselves and nourish our souls with the arts. In Ireland and Czechoslovakia, the poets are the national heroes, becoming presidents and leaders of the countries; here, our artists are disrespected and called 'starving,' as a matter of course. Shame!"

Trules regularly performs and produces theater shows all over Los Angeles. As a "dramaturg," he also helps develop one person shows for other writer-performers. You can find him participating in poetry events in literary venues around the city. Although Trules doesn't consider himself a "poet," per se, he does pride himself with being a self-taught, spoken word artist, and a performance poet. 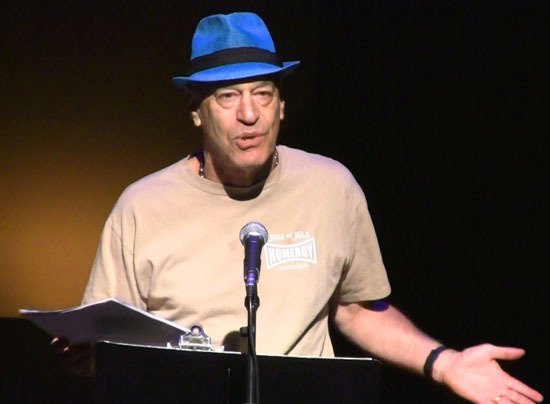 Eric Trules, photo from: "Redemption Song" at the Actor's Gang, 2013, Courtesy of Imaginese