A White House Conference on Working Fathers was a long-time coming but in the end, it was worth waiting for. Held on June 9th, it revealed that there is still a lot of confusion around men and their roles and we need a reset on what we actually know, especially when it comes to how we perceive parenting styles and responsibilities among the different genders.

Families and Work Institute helped to launch recent discussions about working fathers because some of it can be traced back the release of the our 2011 report, The New Male Mystique. Indeed, at the White House, the Chairman of the Council of Economic Advisors, Jason Furman displayed one of the findings from that report -- that employed fathers in dual-earner couples experience more work-family conflict that employed mothers in dual-earner couples. 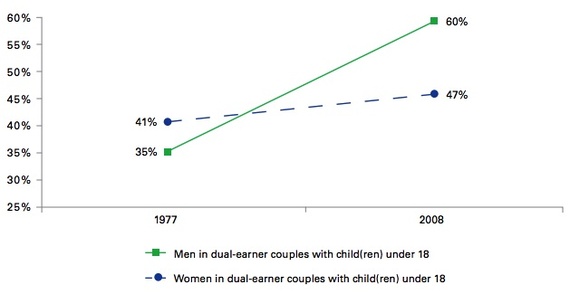 This finding continues to evoke surprise. In fact, Furman reported that some of his staff joked that this might actually just indicate that men were more likely to be whiners.

If there was unanimity in the comments during the Conference, it was that fathers want to be present in their children's lives, not just as providers but also as active and involved parents. One dad who came to share his story was Mets second baseman, Daniel Murphy, who recently sparked a national firestorm by choosing to take time off from work to be with his wife when she gave birth. "Long after they tell me I'm not good at baseball anymore I'll be a father and a husband," he told the audience.

A number of the fathers who spoke described having grown up with absent fathers, either because they were always working or because they had abandoned their families. Secretary of Transportation Anthony Foxx told the story of throwing a ball to a tree because there was no father there with a glove to catch it. Experiences like these may be sparking change, which our research has documented. Men want to be "there" for their children, not stick figures, not absent from their lives but they also need and want to be providers, thus sparking the work-family conflict.

At the conference, there were some misconceptions, even at a summit designed to shed light on working dads.

First was the view that all men are alike and all women are alike and that they parent in fundamentally different ways. For example, women hold their children facing inward (to connect with them and nurture them) and men carry their children facing outward (to introduce them to the world). New studies on today's parents and on same-sex parents reveal that differences in parenting are often cultural prescribed and that men and women can and do take different roles.

A second misconception was about gatekeeping. In fact, it was called maternal gatekeeping, where women discourage, take over or criticize men in their parenting roles because they think they can do it better. But my studies have found that men can be gatekeepers too. Additionally, I have found that gatekeeping is not always born from superiority as was discussed at the conference but also from a concern that if someone else (not just fathers, but grandparents, child care providers, etc.) care for children differently than you do, this can feel threatening.

A third misconception was that mothers speak baby talk to children and that fathers speak in full sentences and that speaking in full sentences is better. Many years of research by Anne Fernald of Stanford University, Janet Worker of the University of British Columbia, Patricia Kuhl of the University of Washington show that children learn to speak best when parents use a sing-song voice, stretching out the sounds of words across two octaves. So what Patricia Kuhl calls "parentese" or others call infant-directed speech is best, whether mothers or fathers do it. And it is something that most of us do naturally.

In addition, children learn from hearing rich language but they learn best when parents talk to them in a back and forth way, responding to what their young children do (conversations without words), to the utterances they make, and then to the words they use. This has been called "serve and return by Jack Shonkoff of Harvard University and his colleagues. Both men and women do this and it helps children progress developmentally, as new research by Patricia Kuhl has shown by making movies of children's brain learning language.

All of these misconceptions prescribe and limit the way we should be rather than enable us to be ourselves, as fathers and mothers.

There were some issues that the Conference got very right, according to our research at the Families and Work Institute:

• That both men and women experience stigma when they use the flexibility that their companies offer but this can change--at the conference, Delta Emerson of Ryan urged other companies to create a culture that values flexibility; and
• That creating this culture of flexibility is not an either/or--public policy or business--issue. It will take both to initiate change.

My take away is that we need a reset. We need to stop stereotyping men and women as employees and as parents. We need to value the diversity among them. And we need, in the words of Secretary Foxx, to create a culture that truly values parenting as much as it values working. The White House conference was a good start, but there's a long way to go.

President, Families and Work Institute, Author, "Mind in the Making"