The recent beheading of freelance journalist James Foley (pictured above) by militants from the Islamic State highlights the growing dangers that freelance reporters covering conflict zones face. NAM Editor Andrew Lam writes the paring back by media of foreign correspondents in these regions has opened up new opportunities -- and increased dangers -- for freelancers like Foley and Steven Sotloff, who disappeared while covering the conflict in Syria in 2012. On Wednesday, Sotloff's mother released a video pleading with the head of ISIS for his release.

Among journalists, there's a well-known reality: in conflict zones, you have a better chance of surviving if you are a reporter sponsored by a large news outfit than if you are working as a freelancer.

A case in point: Ian Stewart, a staff reporter for the Associated Press who wrote "Ambushed, A War Reporter's Life On the Line," was shot in the head in 1999 while reporting in Sierra Leone. The bullet lodged in his brain, but the AP arranged for a Swiss air ambulance that took him to London where he was promptly saved. 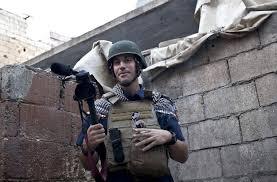 "Freelancers were basically not considered within the jurisdiction of the company's responsibility," he once told me. Stewart, who saved the bullet as a souvenir, noted that a freelancer under similar circumstances most likely wouldn't have been given the same protections.

Another veteran reporter, a friend, who covered the wars in Afghanistan and Iraq for the AP told me there's a world of difference in one's experience as a journalist, depending on whether or not he or she is sponsored by a major news organization. My friend said the infrastructure, insurance, and logistics on the ground were all figured out before she parachuted in.

"You plan ahead," she said. "You have it figured out with your company what steps would be taken in a potential hostage situation." Journalists working for major institutions like the L.A. Times and the New York Times all had bodyguards, armored vehicles, and bulletproof vests when they worked in war zones.

Kidnapped in Syria, James Foley, a freelancer for the GlobalPost and other news outlets, was rescued, only to be kidnapped a second time in November 2012. Foley was taken to Iraq and beheaded by militants from The Islamic State [ISIS] last week. If the United States failed to meet ISIS's demands to stop bombing its positions in Iraq, Steven Sotloff, another kidnapped freelance journalist, may meet the same fate.

Freelancers who find themselves in trouble depend on the kindness of the organizations that buy their work. In Foley's case, GlobalPost claimed it spent millions in an attempt to rescue him, including hiring a security firm and investigating his whereabouts.

But in general, a freelancer is more vulnerable, often traveling without bodyguards and contingency plans. There's a viral photo of Foley carrying his camera and sound recorder and other equipment that reminds viewers of how freelancers need to take advantage of the full multimedia spectrum -- reporting, photojournalism, sound recording -- in order to eke out a living. Foley's situation would be in stark contrast to, say, a CNN star reporter like Anderson Cooper, who -- were he to visit Syria -- would necessitate protection, bodyguards, and an entourage.

"I remember a buddy of mine who was a freelance stringer for the AP in Kabul in '93 or '94 when he was shot in the foot and was losing blood at a critical rate. [The A.P. headquarters in] New York refused to foot the bill to airlift him out, or compel the U.N. or other aid groups to help him," Stewart told me some years ago during an interview. "It was only because of the help of the local bureau chief in Pakistan that he got out and received care."

In an article for the Guardian, Martin Chulov called Foley's situation one of exploitation. "Stripped down, pared-back journalism has created opportunities for those who dare, but it has also allowed outlets to hide behind flaky bottom lines as a means of abdicating responsibility," he wrote.

Yet, if from one perspective freelance writers are exploited, from another the opportunities for the freelancer are abundant. With major news organizations closing their foreign bureaus and letting go of so many seasoned journalists, the demand for front line coverage is great. According to a 2011 study from the American Journalism Review, the number of correspondents employed overseas by newspapers and wire services decreased to 234 from 307, and that included contract writers such as freelancers.

It is why young and risk-taking journalists covering hotspots are finding their work on the front pages of major newspapers at an unprecedented level. There are plenty of buyers for your frontline coverage if you are good and available.

Shane Bauer, a young journalist who wrote for New America Media as well as Mother Jones, the L.A. Times, Democracy Now, and others, was one of them. He was kidnapped in Iraq near the border with Iran with his girlfriend, Sarah Shourd, and friend, Joshua Fattal, in 2009 when he was 28.

The seduction of being a freelancer is great for those who dare, indeed. If you can work for more than one agency, a free agent with multiple talents -- video, writing, radio reporting -- your work can span across the multimedia spectrum, unrestricted.

But it comes with high risks. Here's a piece of advice that should be heeded from a journalist who worked for a major news wire in the United States who declined to share his name and who spent some years reporting in Afghanistan: "You need to work out a plan in advance with the media company about how to handle the potential hostage situation." Don't be naïve, he said, "prepare for the worst-case scenarios."

Freelancers are organizing, however. According to the Committee to Protect Journalists, freelance journalists formed an organization called Frontline Freelance Register to support the physical and mental well-being of freelance journalists" and to obtain "both hostile environment training and insurance when on dangerous assignments."

As for news institutions that have benefitted greatly from these daring and passionate journalists who bear witness to the most troubling historical moments of our time, often at a great price, it's time to step up by taking more responsibility to minimize their risks.