We live in an entertainment era filled with overdoses of testosterone. Let's face it, even Stallone, Schwarzenegger and Willis refuse to let go of the bravura that catapulted them toward stardom decades ago, and female protagonists -- really strong and embraceable ones -- are often overshadowed by their male counterparts. We have made glorious headway in television, however -- Viola Davis, Julianna Margulies and Edie Falco are among the ladies who have captured our attention in the last decade.

And, of course, we can always find compelling female characters in books, in all the forms they arrive in these days.

That said, it's refreshing to discover a noteworthy female protagonist in Cate Harlow. She's the fiery private investigator in author Kristen Houghton's latest endeavor, For I Have Sinned, a memorable read peppered with sass, shame and the sex controversies surrounding Catholic priests. That may sound like a tall order to fill, but Houghton manages to thread together an engaging and often suspenseful outing.

Only those who've had their ears clogged with unholy water during the last three decades would be surprised to learn of the brouhaha surrounding Catholic sex abuse cases. Numerous allegations, investigations, trials and convictions of these child sex abuse cases first began chipping away at the church's spiritual foundation decades ago, but it wasn't until 2002, when the Boston Globe, began a deep investigation into the matter, that the scandals involving priests and other Catholic officials, spawned more headlines and regularly made the evening news. That a bevy of cases were brought against certain titans of the Catholic church who never reported sexual abuse allegations, preferring to, instead, save face and move abusive priests to other parishes, is yet another sin could forget -- or forgive. Since 2001, however, we've uncovered more news that over the last 50 years, there have been allegations of roughly 3,000 priests.

This real-life backstory works as an effective cord in For I Have Sinned. Here, we meet befuddled Marie, who lures Cate into quite the tangled web. At first, Cate is called upon to investigate the disappearance of Marie's brother Joshua. Her initial investigation leads her to believe that Joshua may not have just made a mad dash from home, but, rather, from something much more sinister. You see where things are going here?

When Cate is beckoned to come to a crime scene of a murdered a priest, you get the sense that the author is about to take you on quite the ride. And she does. Other murders follow. Are they connected to Joshua's disappearance? What kind of justice is trying to rise to the surface? These are the questions that Houghton effectively allows her readers to ask in her inventive plot.

So, who is this Cate? And why are we led to believe that we will see more of her after this book? A divorcee with sharp wit, the woman hands off her emotional batons to two main men in her life -- her ex husband, Will, a cop, and Giles, a medical examiner. Added bonus: the interactions between these three characters are noteworthy. And in a surprising move, Houghton successfully weaves in a few different genres -- suspense and mystery, sure, but there's also a dose of terror in here that you would not expect.

Houghton's novel works well, thankfully, because of how dynamic Cate is -- a spirited, confident, well-rounded character that comes to life on the page because of a clever mix of strong dialogue and pitch-perfect storytelling. That, and Cate's distinctly original voice:

To say I'm good at my job is an understatement. It's not vanity; it's a fact. I can get into a lot of places that other PIs can't. Maybe it's my looks. I don't look threatening. I'm five five, fairly athletic and blonde. Not a dumb blonde, either. I speak softly and listen carefully. People tell me things they wouldn't mention to someone who looks tough and street-smart. Let's say that they do underestimate me and I am very good at what I do.

Fans of Janet Evanovich, Sara Paretsky or even that queen of detective yarns, Sue Grafton, could easily wander through these pages with a sense of intrigue. I appreciate works in which the reader can A) enjoy the writing -- we like to find ourselves turning those pages, after all; and B) become invested in. You get that in Houghton's outing and in the end, what we're left with is something memorable: a masterfully woven story about the horrors of the sex abuse scandals rocking the Roman Catholic Church and the impact on both victims and their families. P.I. Cate Harlow handles the case of a missing boy and a pedophile priest with a perfect combination of hard-nosed detective skills and compassion.

A tricky tight-rope to walk creatively, but one, that, fortunately, pays off here. 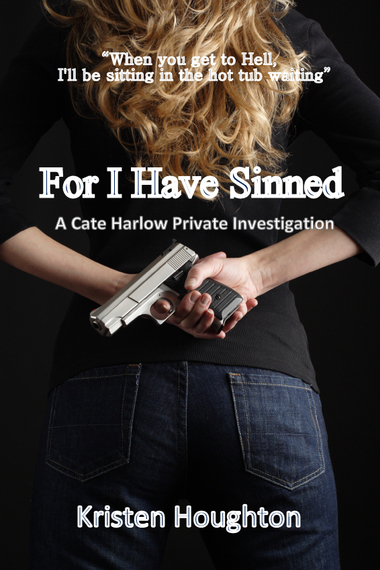