Perhaps no one on the political scene has more of a stake in the deportation of illegal immigrants than Allen Weh. In close contention to win the Republican nomination for New Mexico governor in the June 1 primary, Weh has recently been stressing his "tough stance on immigration." But for Weh,

it's not merely a matter of personal or political conviction: it's a bottom line issue. As owner and chief executive officer of CSI Aviation Services, Inc., a New Mexico-based company that has become the federal government's largest provider of deportation flights, Weh has made a fortune from the business of "removals," and he stands to make even more.

But while immigration has become an increasingly contentious subject in New Mexico's gubernatorial primary , Weh's commercials and website say nothing about his involvement in deportations. Nor have news reports made the connection.

Weh has endorsed "the message" of Arizona's SB1070, requiring police officers to investigate suspected illegal immigrants, saying that he would sign a similar bill if elected. He's vowed to step up state efforts to crack down on "illegals." Accused by his main opponent of being soft on immigration, Weh recently answered back with a phone call campaign featuring the recorded voice of Republican strategist Karl Rove. "Hello, this is Karl Rove calling to set the record straight on border security," Rove reportedly says. "Allen Weh is tough as nails on illegal immigration."

Weh's CSI Aviation, which brokers charter flight packages, has benefited from the U.S. government's increased privatization of its detention and deportation operations.

CSI Aviation received contracts worth more than $218 million over the past five years, according to federal records. The contracts were awarded by ICE, the Bureau of Immigration and Customs Enforcement, the office within the U.S. Department of Homeland Security responsible for deportations. On any given day, CSI Aviation has six planes in the air transporting illegal immigrants for ICE as well as for the Justice Prisoner and Alien Transportation System (JPATS) operated by the U.S. Marshall's Service. It also arranges deportation flights around the world, mostly to Central America.

The federal government's contracts with CSI Aviation have helped make its owner a wealthy man. Allen Weh has loaned his campaign $1.35 million, according to records on file with the New Mexico Secretary of State.

Weh, a retired Marine Corps Reserve colonel, a decorated Vietnam war veteran, and a former state Republican Party chairman, founded his aviation management firm in 1979. It's a family-run enterprise: his wife Rebecca is chief financial officer, daughters Deborah and Ashley are company vice presidents. In 1983, the company entered into contracts with the Department of Defense arranging military airlifts, a business that expanded as CSI Aviation added more government agencies as clients.

The deportation side of the business took off as a result of the 2006 creation of the ICE Flight Operations Unit, or what some refer to as ICE Air. ICE Air is essentially a government-run airline, a spoke-and-hub operation servicing 25 domestic airports (located near immigration detention facilities). From four hubs in the continental United States and one in Puerto Rico, 30-to-40 planes each week, chartered for ICE by CSI Aviation, fly migrants back to their home countries--chief among them Honduras, Guatemala, and El Salvador. (Most Mexican deportees are bused across the border). An ICE-operated travel agency housed in a Kansas City office complex coordinates travel plans. 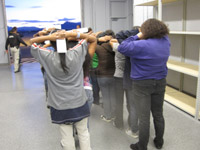 The goals are safety, speed, and efficiency, according to Craig Charles, ICE Air's chief of operations. "Detention time is expensive," Charles told me. "If we can efficiently and safely move these detainees out of custody back to their homes as fast as possible, it will free up bed space."

The cost per passenger to the U.S. government is about $700 per passenger for flights within the Americas. Charters outside the area cost the government nearly 20 times as much--$13,207 for each deportee, according to ICE figures. CSI Aviation recently (May 26, 2010) signed a $527,300 contract with ICE for a flight providing "relocation services" to Cape Verde, Lebanon, and Iraq.

CSI subleases planes and crews from charter companies and subcontracts with security firms to provide guards for each flight. Other than the security personnel walking up and down the aisle, deportation flights resemble commercial airline operations with flight attendants providing safety instructions.

On a recent flight to Guatemala, the mood among deportees was somber. Passengers had been bused from a detention center near Phoenix in the middle of the night to a holding area at a local airport. Just after sunrise, they were escorted from their cells and walked out to the tarmac. Guards patted them down before they were allowed to board.

Like Irma Lemus, many of the deportees on the flight had been caught by the Border Patrol as they tried to enter the U.S. Lemus said that the experience would not dissuade her from trying to re-enter the country. "I'm going to fight," she said in Spanish. "I'm going to fight. I do need to work. I need to be here to make a better life for my children."

Security guards on the plane were also thinking about their own futures. The trip I took (reporting for "World Report" on HDNet television) came on the same day that Arizona Governor Jan Brewer signed SB1070, a fact we learned when the aircraft touched down back in Phoenix. After one guard heard the news, she yelled out in delight: "Yeah! Jobs!" It was an instant and insightful economic analysis of the effects of stepped up immigration enforcement on the detention and deportation industry.

With many Democrats and Republicans arguing about the extent of future immigration crackdowns, prospects are bright for the enforcement business. Other consequences are less sure. Since policy makers have failed to address the many factors that push and pull migrants across borders, the size of the unauthorized-immigrant population of the United States has roughly tripled in the past 20 years, despite massive budget increases for border and immigration law enforcement. The one certain effect of immigration crackdowns will be to benefit certain entrepreneurs--such as Allen Weh.

Jeffrey Kaye is a veteran journalist and author