The women of Twenty Feet from Stardom

Few third graders have been overheard bragging to their classmates...

Not many editors get a standing ovation. Even at the Oscars, its award is sandwiched between Best Costume Design and the latest Revlon commercial. And you are more likely to be mistaken as that fourth cellist before someone says, "Aren't you an editor--of documentaries?"

Twenty Feet from Stardom honors the teammate, the supporting role--in effect, the glue behind some of the greatest songs of the last fifty years. And someone had to convert 700 hours of interviews and archival footage of these amazing women into 90 minutes. Enter Doug Blush, who last Friday embodied the spirit of this movie to help young artists realize their dreams--and to see that being a part of a whole is often the greatest part in the world. 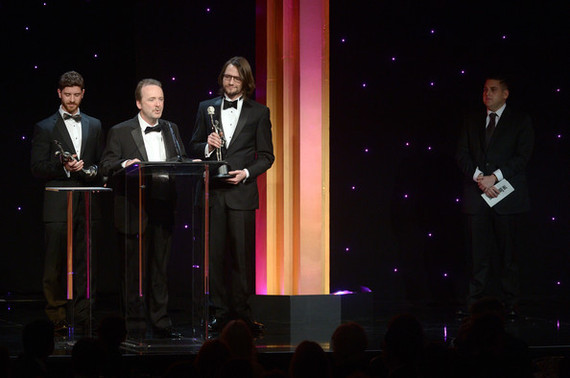 Before his fourth consecutive trip to Sundance, before celebrating the Academy Awards and receiving his ACE award for Twenty Feet from Stardom, Doug Blush was a high school junior in Rochester, Michigan. He attended Focal Point, a summer film camp where teacher, John Prusak (who would go on to be the cinematographer for Michael Moore's groundbreaking documentary, Roger and Me) gave Doug a 16mm camera. 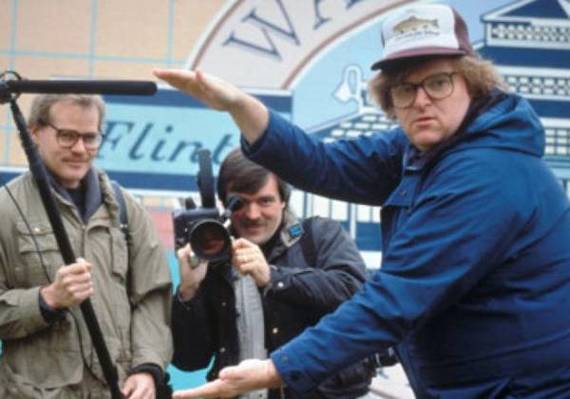 John Prusak, Doug Blush's mentor, on camera for Roger and Me.

Blush has always been grateful to John and to DAFT (Digital Arts Film and Television), the non-profit that sponsors Focal Point and has been educating teachers and students of media since 1969. The American Film Institute recognizes its Michigan Student Film Festival as the longest running student film festival in the nation. 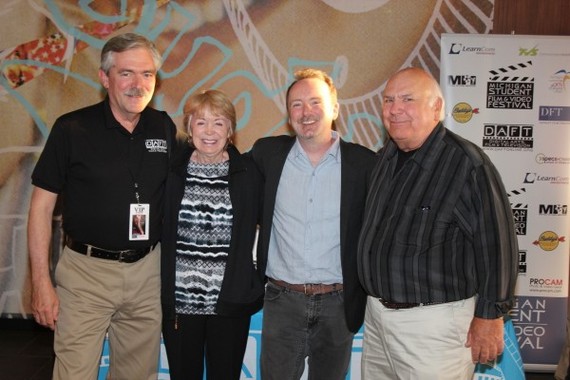 Mentor and student--John Prusak with Doug Blush and his proud parents, Karen and Gordon.

He wanted to pass the torch to another generation of young filmmakers and first suggested a fundraising event over a year ago when DAFT screened his poignant bipolar documentary, Of Two Minds, co-directed with his wife Lisa Klein. He arranged for the film to be screened through the immediate support of RADIUS-TWC and Detroit's own Paul Glantz (founder of Emagine Entertainment). September 19th was set for the charity screening at the company's Royal Oak venue, and the theatre sold out. 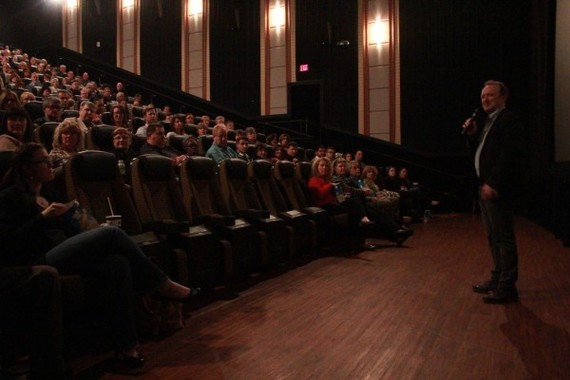 As the film's narrative suggests during a spectacular scene of thousands of birds moving in one smooth motion, teamwork and coordination would be vital to move the screening from simply a "movie" with possibly some Q&A to a celebration of teamwork, education, film and the universal love of music. Lisa Brancato of WDET, Detroit's public radio station, stepped in along with music host Ann Delisi to partner and help promote the big day on the air (link to Ann Delisi's WDET interview with Doug Blush). 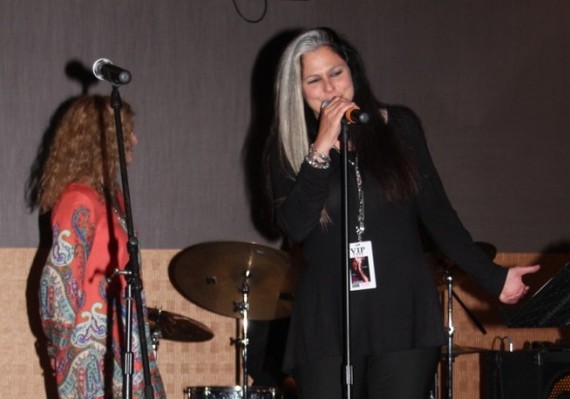 Echoing a celebratory concert from the film's Sundance premiere, Doug suggested a performance to follow the film in Emagine's banquet facility. He put it out on Facebook--who should we ask? Ann Delisi and Doug's friends Andy Henry and Jim Kissling enlisted famous volunteers: Thornetta Davis, an award-winning R&B artist who was twice requested by Ray Charles to open for him; Barbara Payton, also a soloist, who has toured as backup with Kid Rock and Bob Seger; and singer Gia Warner who has also worked in film and television including the Xena and Hercules series as well as voice work for Disney. Gia's father Bobby Lewis, an original Motown recording artist, also lent his immediate support.

When the film ended, each spoke to how the film moved them and echoed the pain, joy, and difficult decisions that go with the art. Questions from the audience ranged from "How do you know what to cut, Doug?" to "How can you ever have any personal life when you're touring?" And the tie between making a film and recording a great song became clear as the performers and Blush told the same story--that being a significant piece in something special is the greatest gift, not being the lead singer, the star or the director.

The scene that Blush knew they were never going to cut was the story of Merry Clayton's late-night summons to join the Rolling Stones for the recording of "Gimme Shelter." "It's the one scene I have to be sure I see, " he shares, despite his hundreds of screenings, "It's the only documentary whose audience bursts into spontaneous applause in the middle of the movie" at the sheer surprise of Clayton's power--particularly when it is played alone. 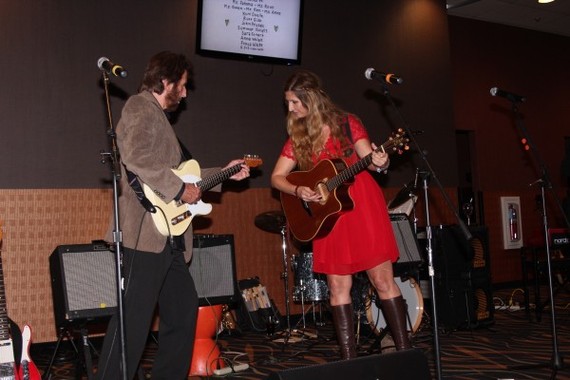 Bobby Lewis of Motown jams with his daughter, Gia Warner.

After the Q&A, the audience moved upstairs to the afterglow with dinner, drinks and a concert. The vital audio equipment came courtesy of other artists whose obscurity rivals that of an editor--Kevin Kuptz, of Ignited Lighting and Sound, provided his equipment and set-up crew, and sound engineer Scott Sowers mixed the entire performance. 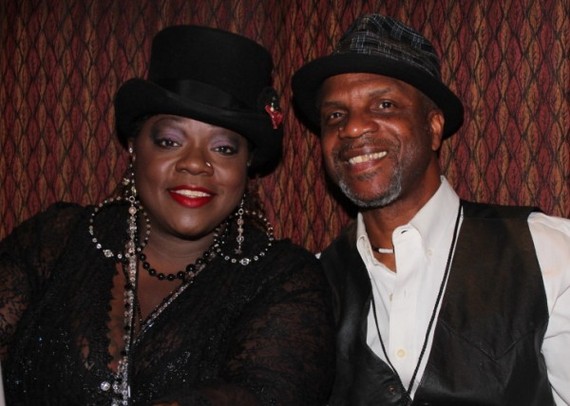 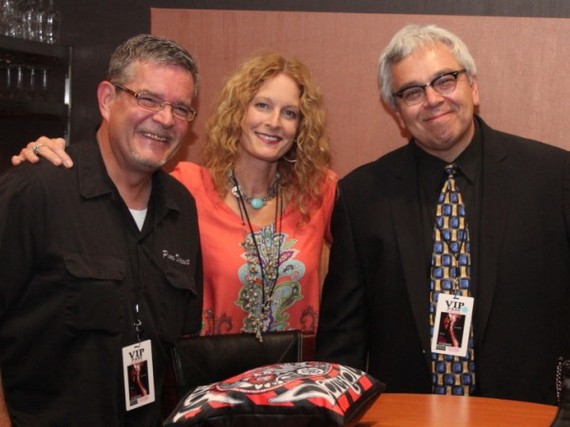 One band member said afterwards, "This was amazing. We don't get to jam too often with other bands and to play with such amazing singers--all in one night. Throw in a movie and dinner and a great cause; it was awesome!"

Barbara Payton, about to tour with Bob Seger, covered "Rock n' Roll" from Led Zeppelin and also sang her own composition, "Enjoy the View" (recorded previously in this clip)...

Followed by Thornetta Davis who closed the evening with the audience clapping and singing along... 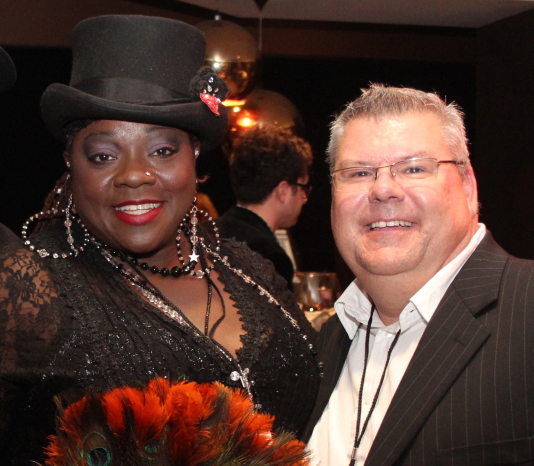 ...or handing you your ticket in the lobby. 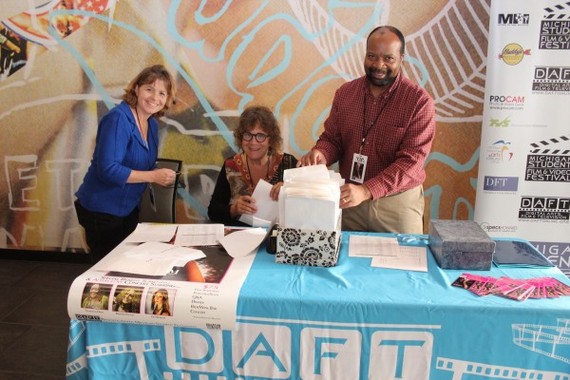 Perhaps the model of September 19th's Twenty Feet from Stardom event will allow more joint-ventures between film and music. 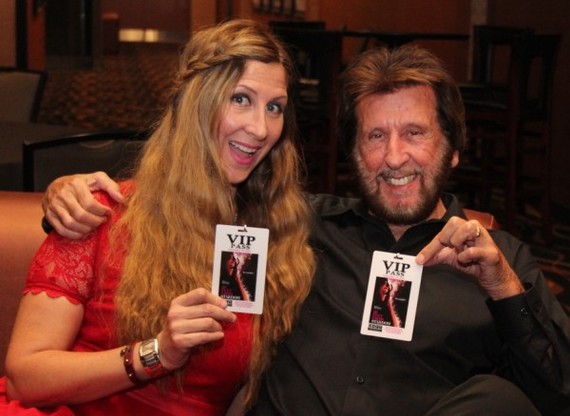 Gia Warner and her father, Bobby Lewis, during sound-check.