The pitchers may be ahead of the hitters, as the adage goes, but Richard Albero, a 65-year-old native of New Jersey, is ahead of all of the players, as he treks on foot from Tampa's George M. Steinbrenner Field to Yankee Stadium in the Bronx.

Yankee fans, like Albero, can be excused for pondering questions such as how the team will do without captain Derek Jeter, a pillar of the organization, who retired after 20 years. Likewise, fans will continue to debate whether or not to embrace Alex Rodriguez, who was banned from the game last year due to his illegal usage of performance-enhancing drugs.

But a bigger issue remains how Albero is feeling one week or so into his epic jaunt of 1,200 miles. He has been walking roughly 15 miles a day, but he intends to "pick it up" to 20 miles a day when he gets to Savannah, Ga.

Albero's mission, which is to raise awareness for the Wounded Warrior Project and to honor his late nephew Gary, who passed away on 9/11, has a quixotic quality to it. He is not tilting at windmills, but he says that he has "enjoyed being on country roads and talking to the cows and the bulls."

His feet ache a bit, and he has had a few "close calls" with vehicles on the country roads, but Albero, who is being accompanied by a support driver, is well-conditioned, as befits a graduate of the Merchant Marine Academy and a former officer in the Naval Reserve.

Still, when asked if he ever walked 20 miles a day when he was in the military, Albero quipped, "the most I ever walked was maybe two." He says that his unit within the merchant marine "was like the F Troop of the academy," which is to say that the daily routine included a lot of good-natured joking.

Albero spent his childhood in New Jersey and as a serviceman he traveled to exotic locales like Bangladesh, but he has roots in the Arthur Avenue area of the Bronx, where his parents grew up. That is how he became a Yankee fan.

When asked about the Brooklyn Dodgers and the New York Giants, the two other New York City teams from his boyhood, Albero said, "They didn't even exist."

On Sunday, March 8, Albero and I spoke over the phone. He was in Ocala, Fla., where he was taking the day off from walking and was encouraged that he had already come close to meeting his original goal of raising $25,000 for the Wounded Warrior Project. He is hoping as he nears New York City and the 9/11 Memorial, where he is likely to stop on his way to Yankee Stadium, that he will be able to revise his goal to at least $100,000.

When Albero talks about Gary, his late nephew, he emphasizes that, unlike most young people, who are "always sweating it out," Gary "just enjoyed life...always had fun." Gary, who was godfather to Albero's son, was a vice president for an insurance company when he passed away at the age of 39.

If Gary's taste in Yankees (he was a Don Mattingly fan) did not always suit his uncle, Albero leaves no doubt that they bonded over baseball and so much else.

Albero, who seems reticent at first but who can be quite a raconteur, told a story about the time that he and Gary, then about 14 years old, drove across country with Gary's brother in a Toyota in the 1970s.

"I did all the driving" during the day, Albero says, but "at night I let Gary drive." Albero then mentioned that one night in Montana, they approached a road block. Because Gary did not know how to drive a stick-shift, he plowed right through the barrier.

Albero chuckles as he recalls the flashing lights pursuing them in the Toyota as he shoved Gary into the passenger seat while he hopped into the driver's seat.

"What are you guys from New York? Don't you know that you've got to stop at a police road block?" said the cops, who released Albero and his nephews without a ticket. As Albero recalls, the police were looking for a convict, an escapee, from a local prison.

Albero also gets animated as he talks about Mickey Mantle, his favorite player from his childhood. "A typical fly ball to left field, and dirt would be flying off Mantle's spikes" as he ran a "half-country mile" from center and caught it. Norm Siebern, the left-fielder for the Yankees in the late 1950s, deferred to Mantle, a speed merchant, who "was literally like the only outfielder out there" patrolling the distant reaches of Yankee Stadium.

While Albero served in the military around the time of the Vietnam War, he did not see combat. But he comes from a military family. His father was a Navy master chief, and his brother was a Navy captain.

For the record, Albero agrees with President Obama's policy of no American boots on the ground in Iraq other than in support, advisory and training roles.

As a military officer, "I never gave out a demerit," he says. He adds that he would try a "different perspective" from the idea of using punishment in the military.

After Albero finishes his East Coast trek, he is thinking of "buying a farm and donating St. Bernards to work with wounded warriors" as well as autistic children.

An Italian-American mensch, Albero says that he learned much of his philosophy from his mother. Her view was that "you should give flowers to people while they're alive, not when they die." 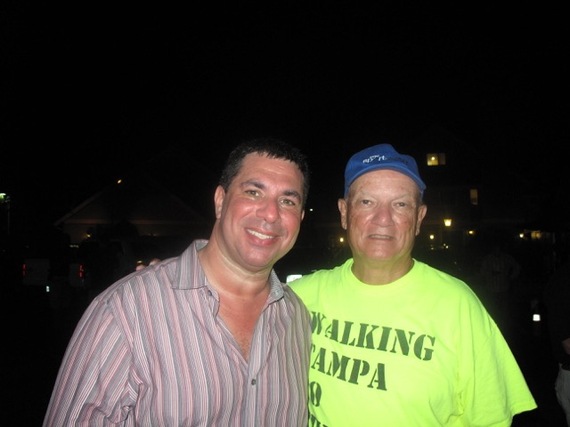 On Wednesday, March 11, three days after our interview, Albero decided to interrupt his journey, a rare interruption for him, only because he wanted to see his Yankee heroes at the annual spring-training bash thrown by Andrew Levy, founder of New York-based Wish You Were Here Productions, a sports marketing agency and sponsor of the trek.

While back in Tampa at the party, Albero helped himself to a smorgasbord of steak, sausages and peppers, shrimp, as well as fresh Maine lobster, and a selection of 100 pizzas, which were flown in from Modern, one of the fabled pizzerias in New Haven, known for its thin-crusted, brick-oven pies. He also mingled with some of his aforementioned Yankee heroes, including manager Joe Girardi, coach Tony Pena, Oscar Gamble, Bucky Dent, Mickey Rivers, Ron Guidry, Darryl Strawberry, Hall of Famer Goose Gossage and Orlando "El Duque" Hernandez. 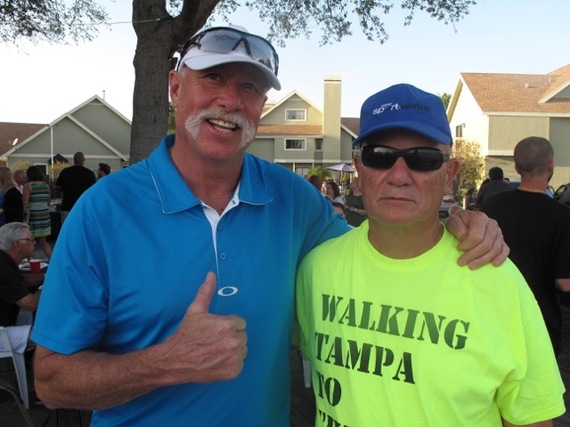 The YES Network followed Albero around, as he talked to the former ballplayers, many of whom are represented by Levy.

At the end of the event, Albero, already 120 miles into his adventure, picked up what Levy called his "next supply of 15 cases" of Sportwater.

Another one of Albero's sponsors, Sportwater bills itself as a "vapor-distilled" product for athletes.

According to Sportwater's Web site, each bottle contains not only hydrated water but also calcium, potassium and magnesium, while paying special attention to "the number of electrolytes and pH."

Levy says that Albero, whose story I will revisit during the next three months, has become a devotee of Sportwater and that it is helping him deal with his daily walks.

When he finishes his trek around Memorial Day weekend, Albero, who may be as fit as most of the ex-ballplayers he met, will of course be rooting for his beloved Yankees, who, he says, "will miss the leadership" of Derek Jeter.

As for Alex Rodriguez, who will be returning to the club after his one-year banishment, Albero says, "I'm not gonna boo him, but I'm not gonna clap for him either."

Those who wish to donate can do so at richardsyankeeswalk.org.