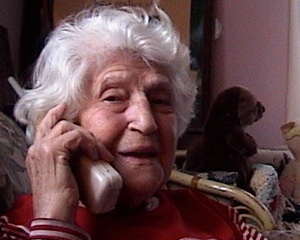 ﻿
It's difficult to believe that a year has passed since we had services for my mother on April 28, 2014. After the funeral, I went back to her house and I took clippings from her fig bush, put them in three pots, and brought them to my country house. They are thriving, as if not to disappoint her. Each clipping has multiple figs and lush green leaves. Like my mother, moving from one sphere to another didn't faze them... in fact, it seems they have become even more hardy and productive. Perhaps her breath is on them, helping them grow. Now that worldly things no longer hinder her, she can move through time and space at will.

For the last five years of her life, I spent a week a month caring for my mother in her home. On warm days in spring, summer, and fall, we'd sometimes sit on her swing in the back yard and sing the songs she sang when I was a child. They are etched in my memory, even though many decades have passed since then. The sound of her sweet voice was such a comfort, assuring us the world would go on forever and she would be there baking her pies and cakes, her special rolls, her Sunday roasts, and Baklava as only she could make it. Now, I find myself singing certain lines from those old songs to myself. They sometimes just pop into my mind, such as: "What'll I do, when you are far away and I am blue, what'll I do?" Or: "You went away and my heart went with you. I say your name in my every prayer..."

She has given all of us the great gift of memory in her memoir, Not Even My Name. She has given us our shared history. And tragic as her life was for a while, she made the best of what was left of it. Her mother, whom she so dearly loved, must be so proud of her. My mother refused to hate. She refused to surrender to depression and anger. When asked how she could go through so much pain and loss and still not hate, she said: "Why should I waste my life hating when there is still so much beauty in the world?" Perhaps that's why she lived in this realm for almost 105 years.

As a child I promised her she would live forever. We must celebrate her life, not her passing, because she will never leave us. She lives on through her story and will live on through all the generations. I see her all around me in the nature that she loved--in the new daffodils pushing through the earth; the just budding branches; the spring rain. She is in the wind. She is in every blade of grass. She is in our hearts.

When I die, don't weep for me as if I am gone.
Whisper my name to someone beside you.
Whisper it loud,
so my name will be carried on the air
to all corners of the earth.

Tell my story to your young
so they remember me.
Speak of me to your neighbor
so our people will live alongside me.

Speak my name often
to resurrect those who have perished
at the hands of the murderers of innocence.
I am their representative.
My story is their story.

To stop the enemy of our people from winning
speak of me and our people often.
We live on through you.

You are my breath--our breath.
You are my voice--our voice.
You alone keep memory alive.

Silence is the final stage of genocide.
Speak of me often.

Although my mother came from a place in the world that was too small to be depicted on a map, as the subject of the memoir, Not Even My Name, she became known to Pontic Greeks world-wide, as the Yia Yia (Grandmother) of all Pontians. To her family and friends she was a warm, sensitive, often humorous, and caring mother, grandmother, and great grandmother.

The only known survivor of her family of 15, including parents, grandparents, siblings, and aunts and uncles, my mother's extraordinary memory brought to life the details of how the Pontic Greeks lived in mountain villages of the Black Sea region of Turkey in the early 20th Century, how the Assyrians lived in small hamlets in southern Turkey, and how the Armenians lived in Diyarbakir. Her memory also allows us to see and feel her community's devastating death march to exile in 1920. To help her survive, her mother left 10-year-old Themia in a small hamlet in southern Turkey, with a woman who promised to care for her. After her mother's death, young Themia was treated as a slave. With the loss of her family, community, and finally her name, changed to Sano by her cruel keeper, Sano ran away to Diyarbakir at age 12. There an Armenian family took her in. When they fled to Aleppo, Syria to avoid further massacres, they took young Sano with them as their daughter.

Sano's future husband, Abraham, an Assyrian who had also fled Turkey and emigrated to the U.S. in 1905, traveled to Aleppo in 1925 to visit exiled cousins and to find a bride. To give Sano a chance at a free life in America, at just 15 years old, her Armenian family arranged Sano's marriage to 45-year-old Abraham. On their arrival in New York City, Sano became mother to Farage, Abraham's 10-year-old son from a previous marriage. Sano and Abraham raised 10 children of their own. I am the eighth.

My mother had once opined, "If I could only write, I'd tell the world what happened." Although I had made my career as a painter, after our trip to Turkey, I decided to be my mother's voice. Not Even My Name was published by Picador, an imprint of St. Martin's Press, in 2000. In 2002, Sano Themia Halo was given the New York Governor's Award for Excellence in Honor of Women's History Month, Honoring Women of Courage and Vision, for making known to the American public for the first time, the history and tragic fate of the Pontic Greeks, a people who had made Asia Minor their home for almost 3,000 years, until their massacre, death marches to exile, and finally the Exchange of Populations in 1923 pursuant to the Treaty of Lausanne. Sano is also featured in a number of documentaries, and has received numerous other honors and awards in the U.S., Canada, and in Greece. In 2002 I established The Sano Themia Halo Pontian Heritage Foundation with the intention of building a living museum in Greece to help future generations know how the Pontic Greeks lived in the Pontic Mountains along the Black Sea. So far our plans have been hindered, but I am still hopeful it will be built.

Although a resident of New York City since her arrival in 1925, neither I nor my mother, nor most of the country, were aware that over 40,000 Pontic Greeks made their homes in Astoria, L.I., with further Pontian communities in Connecticut, Chicago, Ohio, Canada, and elsewhere.

In 2009, for her 100th Birthday, Greece awarded my mother and me honorary Greek citizenship. "Now everyone will know I am Greek," my mother said, referring to a U.S. passport that depicted her place of origin as Turkey, without identifying her as a Greek.

Although my mother's story of loss of family, home, country, and finally even her language and her name was so tragic, she never held any animosity towards the Turkish people. After returning from our 1989 pilgrimage back to Turkey to find her home she said of the Turks we met along the way, "Everyone treated me like family." She said they had lived side by side in peace. "They are people like any other people. They want to raise their families and prosper. You must place the blame where blame belongs, with the Ottoman government. Ataturk. He was the one. Not the only one. But he was the one."

The Ottoman genocide of over three million of their Christian citizens: Greeks, Armenians, and Assyrians under the Young Turk and Kemalist regimes from 1913-1923 took the lives of 353,000 of the 700,000 Pontic Greeks, and a further 700,000 Greeks of Anatolia and Thrace in Ottoman Turkey. It also took the lives of 275,000 Assyrians, more than half their population, and 1.5 million Armenians. In 2007, the International Association of Genocide Scholars (IAGS) passed a Resolution affirming the Genocide of the Pontian and other Asia Minor Greeks and Assyrians as comparable to the Armenian Genocide. Since then the Parliaments of Sweden 2010, and The Netherlands 2015, have each affirmed the Genocide of these three historic Christian peoples in their own resolutions.

In 1976 my mother moved from NYC to Monroe, NY. Above all, she was devoted to her family. She often said, "my family is my life."

Sano Themia Halo is survived by seven of her ten children, plus her many grand- and great-grand children. She was buried with my father, Abraham, in a private family ceremony at Woodlawn Cemetery in Bronx, NY.