I've got a friend who is perhaps, one of the finest keyboard players on the east coast. Though he doesn't talk about it much, he's also one the best drummers I've ever heard. He and I were on Skype one day not long ago. He was messing around in his studio and just for fun I asked him to hop on the set of drums that were set up in the corner of his room. He propped up his iPad on a music stand so I could see him. "Play a funk beat," I said. And he did, he fu&*ing killed it. "Play some uptempo swing," and he tore into a groove that would make most drummers look like children. "Play a rock beat," "do a wild fill in 6/8," "play a super fast ska beat..." I couldn't help myself from laughing as I watched him gettin' into it on the little screen of my iPhone. 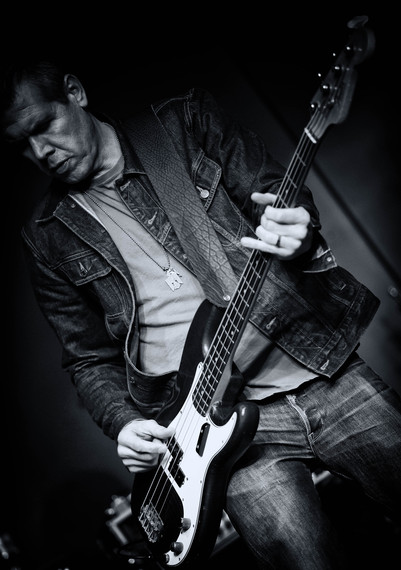 What I was seeing and hearing was fairly close to unbelievable. His playing made me feel the same way I did when I saw one of Prince's first concerts in North Minneapolis in 1980. Just like Prince, my pal was merciless on that drum kit, profoundly skilled. And lest you forget, drums were this guy's second instrument; piano's his main thing.

A few years back he'd been complaining to me that it was hard being a musician; hard to make a living, hard to hold a family together, and hard to explain to anyone who wasn't a professional player what it felt like to do anything resembling what he does. He told me some of his friends were investment bankers. They were making so much money that my friend felt small next to them. He admitted that he sometimes felt like he was less of an adult, perhaps less of a man, than they were. Sad, but there have been times in my own career where I've felt the same thing. If you're a player, that's how it goes sometimes.

My friend was having a hell of a hard time making ends meet at that point in his life. He wondered if he'd made the right choice in becoming a full-time musician. It's a weird way to make a living after all, blowing and beating and strumming and pounding and plucking on things to make sounds. That's basically what being a musician comes down to; you're a tinkerer. A tinkerer who shapes sound waves. A soundwave-shaper.

What does it mean in the scheme of things, to be one of those people? I guess it depends on how and why you shape the sounds. The ones who do it well, who do it for the love of the sounds they make (and not just to show off their chops) are like modern day shamans. They are mystics who make beauty out of invisible waves. They can make you laugh and cry, they can make you dance and shout; make you get up off your feet and shake your ass like you've become a child all over again.

A profoundly skilled musician might not make the same kind of money as an investment banker, but what's the ability to make music worth? What would you give to get up on a bandstand and blow the living shit of a trumpet or a saxophone? What's it worth to you to be able to sit down at a piano and bring the woman in the front row to tears with just your fingertips? How do you estimate the value of being able to wind out on a Stratocaster and sing a song that makes an entire room rise up out of their seats and be transported, if only for a moment, to a higher realm? I can tell you firsthand, just like I told my friend. The value of being able to do that is inestimable.

I say this for my brothers and sisters who have elected to become soundwave-shapers, who have given their time, their sweat, and their waking (and dreaming) hours over to this strange and hallowed profession: The world would be a mighty desolate place without you in it.

We've got all sorts of people walking around looking for answers, looking to be moved, looking to feel something beyond the normal work-a-day rhythms of life. People who are looking for a sense that they, that we, are part of a endless and integrated system, part of an ongoing history that moves through time as if on the crest of a colossal wave.

Most musicians may not be making much money plying their trade these days, but none of us ever set out with that goal in mind. If we had, we'd have become investment bankers. God knows I've got no quarrel with the bankers, I want them to be enormously successful - especially when they're investing my hard earned money - but as they are judged by the size of their returns, we musicians are judged (or should be judged) on the ways and the depths to which we move our listeners.

To my friend, the piano player, and to all of us musicians and singers who might feel overlooked in the shadow of a music business that has been so dramatically disrupted, take solace in the knowledge that our success cannot be gauged by quantitative measurements, as many other things can. Our worth is of a totally different order.

The assessments that are appropriate to us are the same as with any strong spiritual leader. They resonate with me as these: How have you moved your listeners? How genuinely have you made them realize that life has purpose and that our existence here on this planet is nothing short of a miracle?