Nancy is not my sister, not really. At least not on paper, where some people still think the concept of "real" family begins and ends. Of course they're wrong -- they're wrong today, in 2016 and they were wrong in 1974 when we met.

In 1974, I was 11 and she was 16. With a speed that would rival any coup de foudre love affair Nancy became the sun of my universe. She became my sister and I became her little brother, because those were the designations by which we chose to identify our relationship.

No one else seemed to get it -- not our parents, especially not her boyfriend -- but that didn't bother either of us. For the past 42 years, it never has bothered us.

Nancy and I were both living in Geneva, Switzerland with our families. My father was a Canadian diplomat; hers was an American businessman. She was a last-minute replacement babysitter, back in those days when teenage girls babysat as a matter of course, but boys rarely did. The corrals of gender were much more inflexible in those days, and rarely breached, especially by boys, for whom there was a terrible price to be paid if they tried.

Writing this, I've tried to remember what first drew me to Nancy. I have an impression of being pulled inexorably into her embrace, but of course that didn't happen. Babysitters didn't embrace their charges on the first night and, God knows, 11-year olds are a cautious lot. She wore Chantilly and Miss Dior perfume and smelled wonderful.

"Sparkle" is one of the most overused literary clichés in Christendom, but it's her eyes I remember. They seemed full of not only joy, but also potential. And they swept me up -- my 11-year old nerd's oddness, my vampire comic obsession, my fashion magazines, and my gothic novels. Nancy never questioned any of it.

She found me delightful.

I also had a secret. There was a girl living in my head, and she was me. The term "gender identity" or "transgender child" or "trans girl" was not part of any popular lexicon in those days, but even if it had been, any declaration of unorthodox gender from me would have been as unwelcome to my parents as the pale pink Cover Girl lipstick I surreptitiously applied before dashing off to meet the school bus. In truth I'd identified internally as female since earliest memory, but it was only at the threshold of adolescence that the disunity between my body and my sense of my gender began to fray and skew the edges of my world.

There is no way to overstate the oddity of a 12 or 13-year old boy in the early '70s wearing women's cologne, or makeup, to school, particularly when not an homage to David Bowie, but instead an homage to the leggy, long-haired American girls sporting the suede purses and headbands of the era, whom I idolized and with whom I identified.

As there literally was no language for it, I wasn't able to tell her, but she seemed to sense my difference nonetheless. She encouraged me to write poetry, taught me to knit, introduced me to the music of Carly Simon and Janis Ian, women whose lyrics spoke to me in a way music never had. She wrote a song for me, gave me her second-hand cosmetics, loaded met up on the gothic novels I loved, and loaded me up with love.

She took me shopping in downtown Geneva on the train. Perhaps we made an incongruous couple, the 12-year old boy who looked like a little German girl, and the tall, elegant American girl who spoke perfect French and caught every man's eye as she strode past.

When Nancy left for college in the States, I was disconsolate. The night of her flight, I wept great, shredding gales of tears. So frightening was my keening that night that my parents talked about calling a doctor. The mourning of her absence was never as bad as it was that night, when all I could do was bleed tears into a pillowcase I'd sprinkled with Chantilly talcum powder.

In 1977, I was packed off to a macho boarding school in western Canada. While my parents' official position was that my failing grades and my moodiness at home were the cause, as an adult I know they also hoped that the school would knock some of the femme out of me. It didn't, but not for lack of effort on the part of some of my peers. The bullying and violence, especially my first year, took a terrible toll. I was schooled in a level of self-hatred I hadn't previously contemplated. An aborted suicide attempt during my first year at boarding school failed, thank God, and it was never repeated because whoever I was -- boy, girl, something fluidly in-between -- my value had already been affirmed by my sister Nancy.

However much the toxic masculinity of my environment might assault and batter me at every turn in that harsh world, Nancy had made is safe to be me. Her most lasting gift to me at that age was the ability to see that even if I wasn't beautiful, or lovable, or serious enough for the expectations of the world of straight adults, I was unique and brimming over with the possibilities of a big life, and beautiful enough for her.

She didn't make it to my high school graduation as we'd always planned, which was more than fine. After graduation, I went to Paris with a modeling contract. I entered college in 1982, came out as gay, because that's what I was told my plural gender identity meant. I left college early in 1984 to try to become a writer.

I met my future husband that summer and when, in 1985, I married him at the Metropolitan Community Church of Toronto, she was one of my two witnesses. In Brian, I'd found someone who, like Nancy, embraced the entirety of me, including everything I'd been taught to hate about myself.

When Nancy moved to western Massachusetts, her house in the country there, with its vast, opaque silence and its view of Mount Monadnock became a place for rest and recharging. She cooked wonderful meals. She wore Miss Dior for me, bringing back a flood of memories just by turning her head. We made trips to nearby Shelburne Falls, with became another place of my heart. Nancy gave me the great gift of New England over the course of those years in the same way she'd given me so many other, similar gifts.

One year, when it looked as though my marriage was at an end, her house was where I went to heal. In 2001, I wrote the opening paragraphs for an essay titled "My Life As A Girl," which was partly about her, in her upstairs study. It was subsequently published in an anthology called The Love That Dares Not Speak Its Name, and became the cornerstone essay in my collection, Other Men's Sons, which won the Randy Shilts Award for Nonfiction from the New York Publishing Triangle in 2008.

She was excited about my writing, but always quick to chide me when she saw meanness, or negativity, or judgment. I laughed it off as her being "new age," and I teased her about living so far in the woods, away from civilization.

It would take me two decades to realize that she was right about everything, as usual. Love is a lighter burden than hate. Steadiness and calm on behalf of a righteous cause will always trump incoherent, generalized rage. And forgiveness really is the ultimate weapon in the face cruelty.

These are important life-lessons for anyone. For queer people who pride themselves on advocating for social justice, they're absolutely essential adult qualities.

I think of Nancy every time I see kindness, or gentleness, or protectiveness, especially towards someone who thinks he or she is fundamentally unlovable, and undeserving of love. I think of her every wedding anniversary, and I honor the fact that she's one of the reasons my husband had someone to walk down the aisle with in 1985, and make a life with.

And that she's one of the reasons I'm alive to write this tonight.

Mostly, I remember Nancy, my sister, every June 3rd, on her birthday. And I know that whatever other unearned blessings have come into my life, few, if any of them can approach the gift to me that her love was, and is. 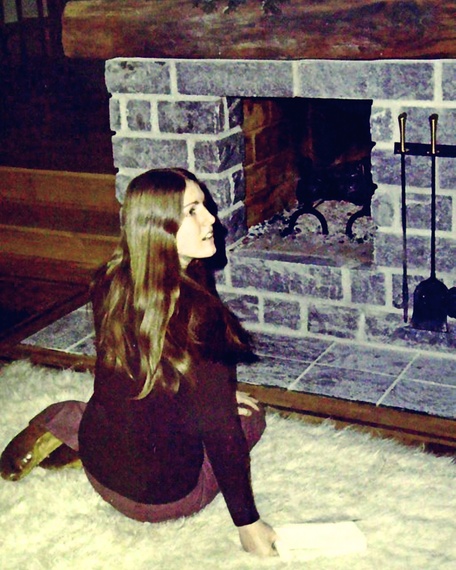 Photograph of Nancy at 16 by Margie Moss Filson, from the author's collection