In our home, we try to teach our children through real life examples. Rather than just tell our teenage boys not to use drugs, we talk about Lenny Bias like he's an old friend. Because they both love basketball, the Lenny Bias story is a human anti-drug ad that shows our boys that it only takes one time for drugs to kill you. Whether or not it was the only time Lenny Bias used cocaine doesn't really matter. What matters is that our boys learn that two days after being chosen as the second overall draft pick, before he could even sign on the dotted line for his new endorsements that would make him rich beyond belief, Bias was dead. Through his story, we have taught our boys that no one is invincible and that drugs don't discriminate. Drugs don't care if you are rich or poor -- they kill you just the same.

The Super Bowl and the weeks leading up to the big game gave us plenty of material to discuss with the boys. Sure, there are lessons that we can all learn from the Super Bowl -- lessons about being a good sport or how practice pays off. But there were also some players in the final game that can be used as teaching tools for our teens. 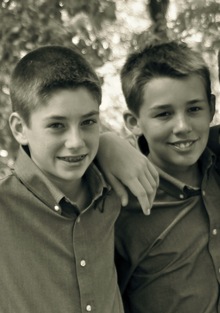 1. The Richard Sherman Lesson: People will always remember the bad you do, and the good will be quickly forgotten.

The post game rant of Richard Sherman's following the NFC Championship game quickly became news around the world. Most of America spent the week before the Super Bowl arguing over whether Richard Sherman is or is not a "thug," rather than speculating about the big game.

What must be explained to those who know little about football is that Richard Sherman is actually a very well-educated man. He graduated as the Salutatorian from his high school in Compton, California and played football at Stanford. He started "Blanket Coverage - The Richard Sherman Foundation" to get proper school supplies and adequate clothing for families in need.

Sure, he has succeeded in life, but how will people remember him for years to come? He will be remembered as that raving guy who looked like he wanted to push Erin Andrews. Through this example, we hope the boys will see that "pretty is as pretty does" (my father's favorite saying as I was growing up) and that all of the good that you do can be wiped away by just one slip of the tongue or one mistake. Granted, Richard Sherman has had a LOT of slips of the tongue over the years, but this particular example is what will be remembered forever.

As William Shakespeare said in Julius Caesar, "The evil that men do lives after them, the good is oft interred with their bones."

Percy Harvin had a frustrating season in the NFL. He began the season by having hip surgery which kept him from playing in 15 of the 16 regular season games. He came back excited to play in the post-season and suffered from a concussion after two plays in his first game. So again, Harvin found himself on the sidelines and was probably doubting himself as a player and worrying about his future since the Seahawks had made a major investment in him. Finally, as the Super Bowl neared, Harvin decided he was ready to play.

And boy did he ever play! He accounted for 137 yards in his first four touches, but he will be remembered best by the opening kick-off of the second half where he ran an 87 yard return for a touchdown to put the Seahawks ahead 28-0.

If you saw that run without knowing anything about Harvin, then you would have been impressed by his lightning fast speed, but knowing that he had just recently recovered from hip surgery and a concussion makes it even sweeter. Sure, he could have doubted himself and stayed out of the game. He could have been self-deprecating and beaten himself up for being weak. He could have given up instead of going through intense rehabilitation for his hip.

3. The Peyton Manning Lesson: A man's character is defined by how he treats other people, even those who can't do anything for him.

I read a fabulous article online titled "Peyton Manning Leaves Crushing Super Bowl Loss With Reputation Intact." In the article, Dan Wetzel writes about how even after their terrible loss to the Seahawks, Peyton Manning was still stopping to sign autographs and talk to fans. As Wetzel so eloquently put it, "At some point, though, at some level, what really matters about a man is how he treats people who hold no leverage over him, let alone how he treats those people in moments of tumult when it would be quite understandable if he just ignored the request." SO TRUE.

We want our boys to learn that it's not how you treat people who can offer you something in return that counts. It's how you treat people no matter who they may be. My father is a well-respected former judge who was the perfect model of this. Over the years, I have heard so many people say how kind he was to them, even as they stood in front of him in court. I have always told my children that they too need to treat everybody as if they are SOMEBODY. Peyton is an example of this and because of it his reputation is one of class and he is viewed by most with admiration and respect.

4) The Russell Wilson Lesson: You may not be the strongest, but you can work the hardest and play the smartest.

Russell Wilson was told over and over again that he was too small to play football professionally, but last Sunday he became the shortest quarterback to ever hold up the Lombardi trophy. That's quite a fete for someone who was the 3rd round pick in 2012. Elizabeth Merrill wrote a great article called "The True Measure of Russell Wilson" on ESPN.com. In it, she quoted Wilson as saying, "My faith is so strong that I believe that God made me 5'11" for a reason... For all the kids that have been told, no, that they can't."

He learned that attitude from his father who always encouraged him to play his hardest and to work to be the smartest player on the field. Because my son hasn't really started growing yet, but plays basketball with a bunch of 8th graders who look like grown men already, I constantly try to teach this lesson. I tell my son to be the one who makes the smartest passes and to be the most prepared so if you get the chance to shoot, that you MAKE THE SHOT. The only way you can do that is to practice/train nonstop.

For our boys, I think the Russell Wilson lesson is most definitely the most applicable right now. He is proof that it's not the size of the man that matters... it's how long he practices, how hard he plays, and how smart he is about both.

Read more by Valerie DeLoach at her blog, Life in a Blender.

Blended Family Blogger; Passionate about my marriage, my kids and co-parenting.