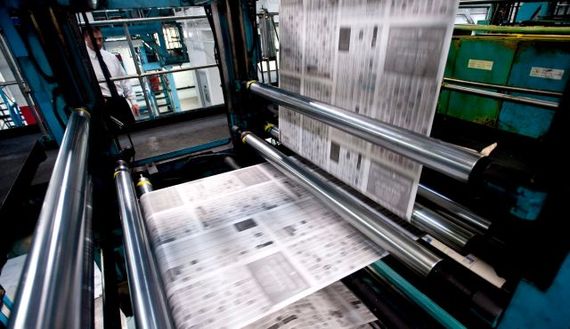 Stop the Presses: Printed newspaper sales continue to slide as more readers get their news online.

Just when news organizations thought they had it figured out, it all changes again. It's a wild world out there in cyberland and after years of struggling to come up with viable financial plans to keep themselves afloat at a time of immense disruptive change to their traditional business models, along comes news that the online goal posts have once again shifted.

They can blame the blare of social media, where according to Oxford University researchers, more people than ever are getting their news -- so much so that Facebook is offering legacy publishers the chance of publishing their content directly to its Instant Articles service, and already they're leaping on board, including one of the world's most respected news organizations, the BBC. This is, after all, increasingly where the audience is: online.

It's not news that printed newspapers have been seeing their main source of revenue -- big, bright, butch display ads -- evaporate in recent years as clients defect to the highly targeted online advertising platforms of search engines and effervescent social media networks. Printed media have been attempting to claw back some of that increasingly evasive cash with ads on their own sites and subscriptions to their content.

The problem is, few people are buying. Some 20,000 online news consumers in 12 countries -- the US, UK, Ireland, Germany, France, Italy, Spain, Denmark, Finland, Brazil, Japan and Australia -- were surveyed for the annual Digital News Report 2015 by the Reuters Institute for the Study of Journalism, and in Britain alone, it was found that the overwhelming majority of people questioned (75%) said they would never pay for news online. That's hardly earth-shattering, and the papers can blame that on their rush to give away all their valuable (and expensive-to-create) content for free at the outset of the frenetic transition to digital, in the hopes of floods of visitors who would click, click, click on big-paying ads and we'd all be happy.

Except it's not quite working out that way.

Many big news organizations are experiencing record numbers of visitors to their sites, as people ditch printed, environmentally unfriendly offerings and go online -- Yahoo! News leads as of June 2015 with 175 million estimated unique monthly users, according to a compilation of tracking sites' data, with aggregator Google News second (150 million) and The Huffington Post in third place with 110 million uniques a month.

Compare that with the storied New York Times in fifth place at 70 million and Britain's Daily Mail tabloid eight with 63 million unique visitors a month. The problem is that not everything is clicking into place -- the average click-through rate for banner advertising on websites across the web is less than 1% and may even be as low as 0.1%. That paltry figure is compounded by a general decline in the value of the ads themselves, leaving a growing number of online new operations flailing.

So we come to the news-subscription model, which arrived online late in the game, way after it the freebie floodgates had long been open. We're so used to free content now that we baulk at the very idea of paying for our online news, the prevalent sentiment reflected in the Reuters study. But big news brands, such as The New York Times and various Rupert Murdoch titles (notably The Wall Street Journal and British papers The Times, Sunday Times and The Sun) have had successes with either full or partial paywalls. The New York Times, which offers online-only readers a limited number of free articles per month before charging for access, says it expects to reach 1 million digital subscribers in the summer of this year. The lesson here is that the people paying for Internet-based news and financial information content are doing so at places that provide superior levels of coverage that's largely not available elsewhere.

Other, smaller news sites have been experimenting with sponsored content, or "native advertising" , as they like to euphemistically call it -- pretty words that basically mean it's advertorial dressed up as an article and sandwiched in between real news stories, to give the false impression that it's worthy and valid. Consumers don't like it, it unsurprisingly turns out, with nearly a third of those questioned for the study saying they felt tricked or deceived after having read such material. That's not good news for sponsoring companies and their brands either.

Other takeaways from this fourth annual news media survey showed that newspaper sales continued to fall and that there has been a significant increase in the use of ad blockers in browsers -- 47% in the U.S, and 39% in the UK. With Apple about to come out with a new mobile browser that similarly swats away those pesky ads, all told it's an alarming development for news organizations heavily reliant on their online advertising revenues.

Meanwhile, the study revealed that a quarter of online news consumers get their news via their mobile phone, a rise of 20% compared to 2014, and 45% of people in all the countries surveyed said they use at least two digital devices weekly to get their news, which primarily means smartphones and tablet computers.

Rasmus Kleis Nielsen, director of research at Reuters Institute, said the latest figures presented a continuing conundrum for news companies trying to work out how to survive online as they die offline.

"This means sustainable business models remain elusive even for those who succeed in building an audience."

Online and elusive. Is it all just a shimmering chimera, an exorbitant, luxuriant, unobtainable fantasy where we -- both sides -- think we can have it all, but in the end get nothing worth having?