I hesitated to use this title, because I know it turns people off. It would be nifty to write one of those "gotta read" pieces and by using this title, I know many stop reading. And that is -- precisely -- my point. Very few of us who are white and whose children are white ever have to think about our children being... white. We use adjectives like "cute" or "athletic" or "smart" or "kind,"but not "white."

However, my friends who are black mothers are never unaware that they have black children. Because they are exceedingly aware -- every day -- that this blackness, in our culture, increases the chances of traffic stops. Of suspension or expulsion. Of false arrest. Of death. Not because of behavior, but because of blackness.

Most of my black friends who have white co-workers do not talk about these things. Because that is not the way to promotion or getting along. So black folks have to endure false assumptions about their very being just to survive. One of the pieces I read that best expresses the inequities is one where the author deftly addresses "very real questions about injustice, race, and systematic oppression," but also has the courage to acknowledge his presumption when he falsely presumes that one of his interviewees is not married to the mother of his children -- precisely because he is black.

We who are white make presumptions and assumptions in all kinds of ways that we don't even acknowledge. And those presumptions damage -- and can kill. In this past month, two teenagers who have visited my home have expressed concern about St. Louis "you know, because of Ferguson." A beloved friend, when hearing that I was going to St. Louis for the World Robotics Competition, said, "Stay away from Ferguson."

And this is what we have become as a nation. We caution others away from what we perceive to be problems -- even though we're the problem! We look at areas like Ferguson or Baltimore or the South Side of Chicago (where I was born and where my children were born) and we assume and presume.

It reminds me of my high school biology class, where we learned about the assumption that maggots came from rotting meat -- not from flies. The scientist Francesco Redi put meat in jars and left some of the jars open -- and sealed other jars with fine gauze. He proved that it was the flies that landed on the meat that brought the maggots -- and not the meat that brought the maggots.

Black folks didn't create the racism, but too many of us who are white blame black folks for talking about the maggots of racism and discrimination. Black mothers want the exact same thing that white mothers want -- good education, affordable housing, wholesome food, safe streets. But too many of us who are white mothers presume that black mothers in certain neighborhoods somehow bring this on themselves -- that if hip hop music, sagging pants and hoodies didn't exist, racism wouldn't exist, and black children wouldn't be murdered. This weary mythology is such an inculcated part of our culture that we don't even recognize the fallacious nature of the insidious lie. So, we tiptoe around the truth -- and assuage our concerns. And we white mothers are grateful that our children are "safe" while forgetting about the black mothers. We forget the names of Sybrina (Trayvon's mom), Lucia (Jordan's mom) and Lesley (Michael's mom).

The first Mother's Day came from mothers who celebrated and wanted peace after war. What if more white mothers wanted peace for black mothers' children? What if we were to look at a place like Ferguson and see the evil of a child being gunned down in a quiet, residential street? What if we who are white mothers were to know that there would be national outrage if any of our teenaged son's body lay on the hot street for more than four hours, as flies swarmed? I went to Ferguson where Mike Brown's body lay. To pray. To grieve. To see the narrow, tree-lined street. To bear witness. I've included two of the pictures. One reads, "Love Your Neighbor" -- isn't that what most of us moms teach our children? The other says, "Black is Beautiful" and "Change for Mike." What if we change our nation? For Mike. And for all our children. 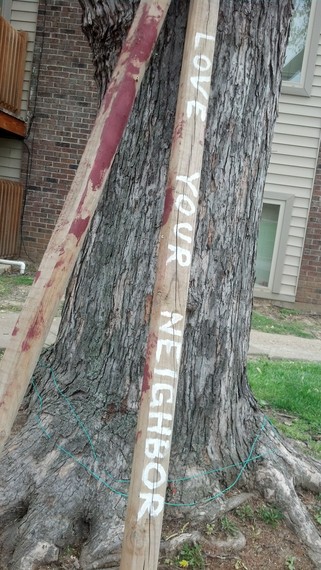 More:
RacismmothersMike BrownprejudiceMotherhood
Newsletter Sign Up
Raise the kind of person you'd like to know
Subscribe to our parenting newsletter.
Successfully Subscribed!
Realness delivered to your inbox

Minister, Mom, Cookie Baker, Believer in "Liberty & Justice for All"