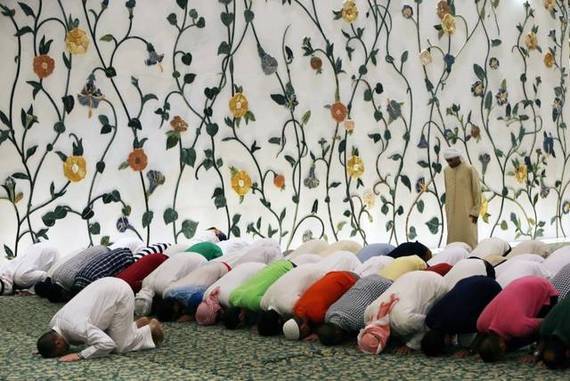 Recently the subject of praying in public has been in the news. The 4th Circuit Court of Appeals decided to hear a case concerning the constitutionality of North Carolina Rowan county commissioners opening meetings with a prayer.

As a Muslim, I'm all for praying whenever possible. Prayers are remembrances and communications with God. Muslims remember and connect with God in everything we do. Whenever we start something we say "Bismillah", in the name of God. When something good happens we say "Alhamdulillah", all praise/thanks is due to God. When we plan to do something we say "Insha Allah", God willing. When we are joyful, frightened, hopeful, etc., we remind ourselves that God is the Greatest by saying "Allahu Akbar". Muslims pray to God, the creator of the universe, the God of Abraham, Moses and Jesus. The Arabic word for God is Allah, and even Christians who speak Arabic say Allah when referring to God.

Our relationship with God deepens further during the 5 daily prayers Muslims are required to perform at prescribed times throughout the day. Even though only 17% of the world population of Muslims are native Arabic speakers, the prayers are recited in Arabic. Prayers contain verses from the Quran, which Muslims try to memorize in Arabic. We believe the Quran contains the actual words of God, sent as a guidance for all of humanity. Muslims can go to any Mosque in the world and feel connected, regardless of their native tongue, because they are unified by praying in Arabic.

Although required parts of the prayer are recited in Arabic, we can also make personal supplications in our own language during the prayer and anytime throughout the day. 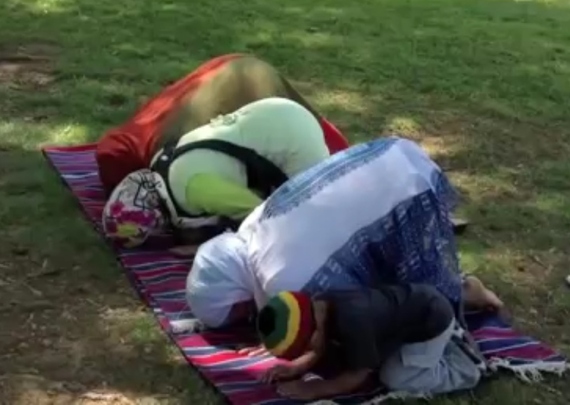 Another requirement of the prayer is that Muslims face the direction of the Kaaba, in the city of Mecca, when we pray. The Kaaba was originally built by Prophet Abraham and his son as the first house of worship to God. During the prayer there are required motions such as bowing and touching our foreheads to the floor. When we pray in congregation we are required to maintain a straight line and touch shoulder to shoulder with the people on either side, while going through the required motions in unison. When I do this, it makes me feel connected, not just with the people around me, but with Muslims around the world praying at the same time. 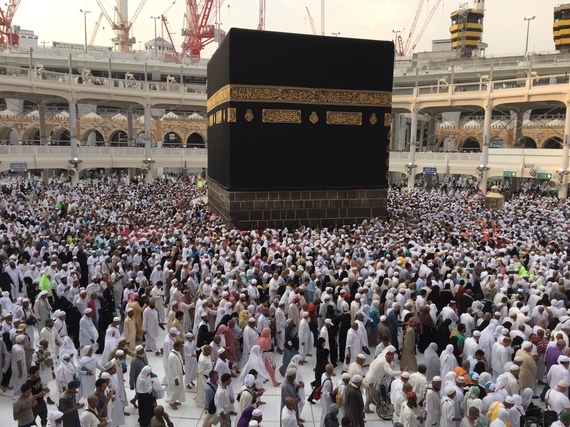 The Kaaba in Mecca Saudi Arabia, the direction in which all Muslims pray. Originally built by Prophet Abraham as the first house of worship in the Monotheistic tradition.

Prayers should only take about 10 minutes, but Friday prayer (Jummah) is different, in that it's an obligatory congregational midday prayer, which includes a sermon, and can take about an hour. While it's best to pray in congregation at a Mosque, Muslims can pray anywhere, including public places.

The First Amendment gives Americans the freedom to worship and pray as we choose. And because America is a pluralistic society we have opportunities to learn about the faith traditions of others, while not compromising our own faith. One such opportunity is Meck Min's annual Citywide Interfaith Thanksgiving service which has been held for 41 years in Charlotte, NC.

When offering prayers in public to a diverse gathering, one must distinguish between educating about different faith traditions and expecting audience members to participate in something which may be contrary to their beliefs.

For example, when Christians (some of whom use God and Jesus interchangeably) use the phrase "In Jesus' name we pray", Muslims interpret that as worshiping someone other than God. While Muslims revere Jesus as a prophet, we don't pray to him, or to Prophet Muhammad.

So when praying out loud, be it at a council meeting or at Thanksgiving, keep the diversity of your audience in mind and pray away.