Newly-released internal training documents from several for-profit colleges illustrate a culture that encourages recruiters to increase enrollment by focusing on emotions such as "pain" and "fear" to attract low-income students who are struggling with adverse personal and financial circumstances.

The documents, obtained by a Senate oversight committee, shed light on the high-pressure recruiting tactics employed by some for-profit schools to increase enrollment numbers and the profits that come from federal student-aid dollars.

"Remind them of what things will be like if they don't continue forward and earn their degrees," reads one document obtained from ITT Technical Institute, a for-profit school with more than 100 campuses across the country. "Poke the pain a bit and remind them who else is depending on them and their commitment to a better future."

The Senate Health, Education, Labor and Pensions Committee has conducted a series of hearings probing the for-profit education sector during the past year. Sen. Tom Harkin (D-Iowa), who chairs the committee, referenced the documents in a Monday-evening speech on the Senate floor.

For-profit colleges are facing increased scrutiny and new regulations amid growing evidence of aggressive and deceptive recruiting tactics and a disproportionate number of students defaulting on federal loans. Critics of the industry have pointed to the tremendous amounts of money such schools spend on marketing and recruiting in order to get more students -- and their federal aid funds -- in the door.

Harkin's committee has requested a series of internal training documents from numerous for-profit schools. Among the more eye-opening materials turned over to the committee were training guides from ITT and Kaplan University, which is owned by The Washington Post Co. (Read our look at Kaplan's questionable tactics here.)

The ITT training documents laid out a "Pain Funnel and Pain Puzzle" that describes a series of questions recruiters should ask prospective students in order to "poke the pain" and convince them to sign up for classes. "Level 1 Pain" questions focus on telling the story of a student's performance in high school or in getting a GED.

The recruiter is then instructed to continue probing, asking questions such as "What has not having a college education cost you?" and "What are you willing to change now, or have you given up trying to deal with the problem?"

A similar document from Kaplan University encourages recruiters to "Keep digging until you uncover their pain, fears and dreams" and to "Get to their emotions and you will create the urgency!"

The internal training guides shed light on recruitment methods that have long been criticized by student-advocacy groups as preying on uninformed, uneducated students who may have little chance of success once admitted to the schools.

A Kaplan spokeswoman said the company discontinued the recruiting guide mentioning "pain" and "fear" last year. She pointed to a new company policy that allows students to withdraw free of charge within four or five weeks if they are not satisfied with the program

"When students are enrolled through deception or fear, they are less prepared to meet the challenges of college," Harkin said Monday evening on the Senate floor. "Rather than offering students a better life, these types of strong-arm, emotionally abusive tactics are all too typical of schools that have little or no interest in providing students the academic help and support they need for the students to succeed."

A Senate report released last year found extremely high turnover rates for students in the for-profit sector: 57 percent of students had withdrawn within a year, according to an analysis of students at 16 large for-profit schools between July 2008 and June 2009.

A document obtained from a privately owned for-profit school, Vatterott Educational Centers Inc. noted that, "We deal with people that live in the moment and for the moment. Their decision to start, stay in school or quit school is based more on emotion than logic. Pain is the greater motivator in the short term."

Officials at ITT and Vatterott did not respond to requests for comment Tuesday afternoon.

Students at for-profit schools represent less than 15 percent of college enrollments nationwide, but take in a quarter of federal student-aid dollars and account for nearly half of all student loan defaults, according to data released last week by the Department of Education. A quarter of all students enrolled at for-profit schools defaulted on student loans within three years -- more than twice the rate of students at public nonprofit colleges.

Numerous corporations that own for-profit colleges -- including the Apollo Group, which owns University of Phoenix, and Corinthian Colleges Inc., which runs the Everest College chain -- derive more than 85 percent of their revenue from federal student aid.

Read the "Pain Funnel" page from an ITT Tech training manual and read the full documents from the floor speech below: 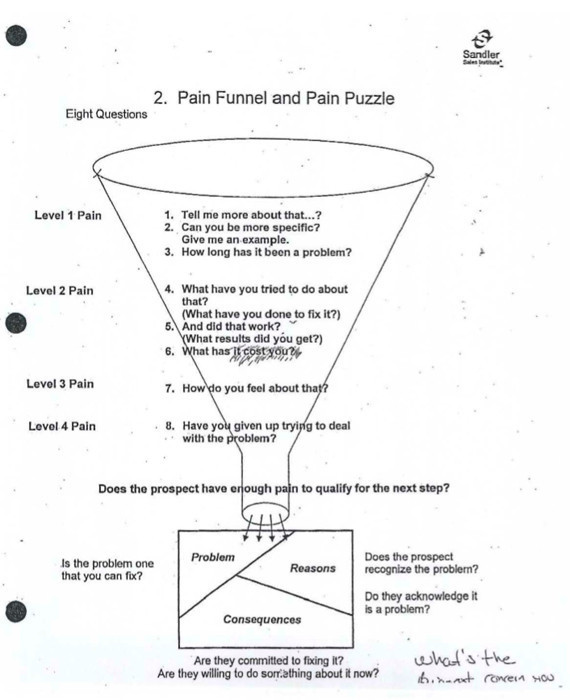 Below, the "Kaplan document": 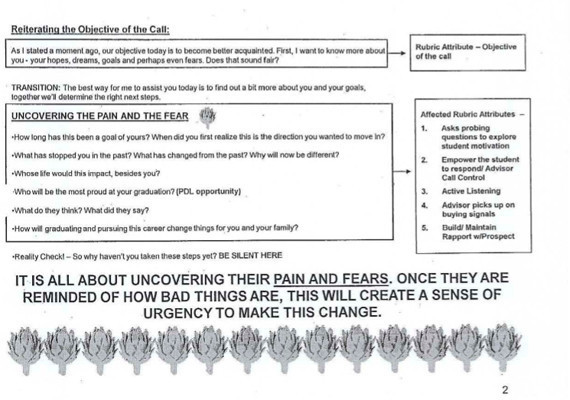 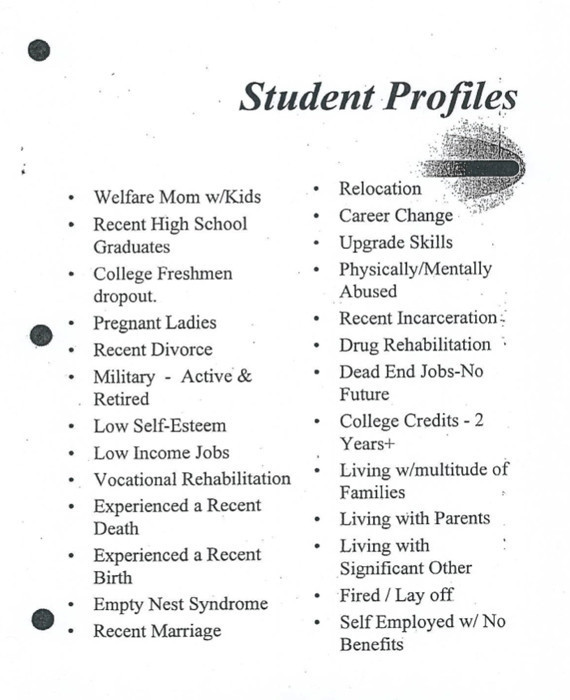 Read the full documents from the floor speech: