A quarter of all federal student loan borrowers at for-profit colleges defaulted on their loans within three years of beginning to repay them--more than twice the rate of their counterparts at non-profit institutions, according to new data released today by the Department of Education.

In addition, students taking out loans at for-profit schools were responsible for nearly half of all federal student loan defaults within the three-year timeframe, even though students enrolled at such institutions made up less than 15 percent of college students nationwide.

The findings released by the Department of Education come as the for-profit college sector faces heightened public scrutiny over questionable outcomes for students, many of whom leave the schools with debts they cannot repay. Average tuition at for-profit schools is nearly twice that of the in-state tuition at four-year public colleges, and more than five times the average tuition at community colleges, according to a Senate report released last year.

The data released today is essentially a snapshot in time: The Department of Education analyzed students whose loans began coming due between October 2007 and September 2008, and tracked those students through last September. Overall, nearly 14 percent of students analyzed at all colleges nationwide went into default within the three years. 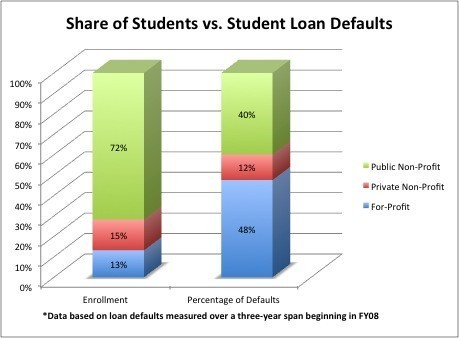 But the numbers are particularly noteworthy for the for-profit sector, which at 25 percent had the highest default rate of any segment in higher education. Public non-profit schools had about 11 percent of borrowers defaulting in the three-year window, while students at private non-profit schools defaulted at a rate of less than eight percent.

Though there is flexibility in repayment plans, federal student loans are among the most difficult debts to discharge. In most cases, the debt persists even after someone declares bankruptcy.

Student loan default rates are a key factor in a college's eligibility for federal student aid dollars. In the case of for-profit colleges, access to higher education grants and loans is essential to the industry's survival. Many for-profit schools derive upwards of 80 percent of revenue from federal student aid.

The three-year rates released by the Department of Education today won't have a direct impact on student aid eligibility, but the same data in coming years will figure heavily into whether schools could face restricted access to higher education grants and loans.

Currently, schools are graded on a two-year timescale for student loan defaults. Schools that have more than 25 percent of borrowers going into default within two years could face sanctions and limitations to federal student aid dollars if the high default rates persisted for three consecutive years.

But Congress changed the rules in 2008, requiring an additional year of analysis to better gauge students' ability to repay their loans. There have been concerns in Congress and among student advocates that some for-profit schools actively managed their default rates by placing students into loan deferment plans or other agreements that prevented defaults until the two-year window had passed. 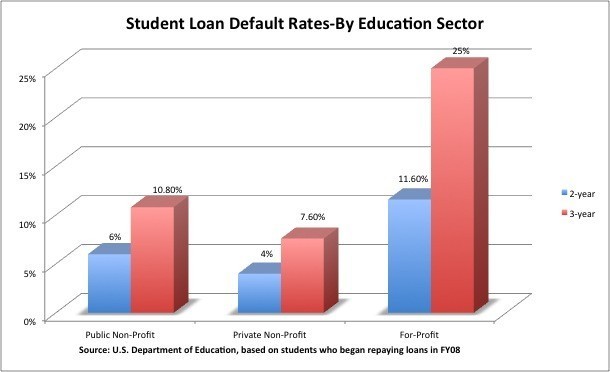 "You would expect the three-year default rates to be somewhat higher because students have a longer period of time in which to default," said a Department of Education official who discussed the default data with reporters before it was officially released. "But if the three-year rate seems disproportionately high compared to other sectors, then that may be a sign that institutions in that sector or a particular institution is managing its default rate aggressively."

Schools are still officially transitioning from the two-year window to the three-year window in measuring loan defaults. The first year in which a college could be sanctioned based on the three-year loan data is 2014. Schools must have more than 30 percent of students default on loans within the three-year timeframe, in three consecutive years, to be restricted from federal student aid.

The Association of Private Sector Colleges and Universities, which represents the for-profit college sector, released a statement saying the group was "disappointed" to see the increases in default rates. But the group pointed to the high unemployment rate and the generally low-income demographics of its students as contributing factors to the higher default rates.

"Private sector college and university students are individuals working hard to build better lives, but are starting from the farthest back in the pack," the statement reads. "They are the most economically disadvantaged, and unfortunately this fact becomes most pronounced in difficult economic times."

Other higher education research groups said the data is an instructive lens for discerning student outcomes at different schools. Although the data does not yet officially impact federal student aid policy, the data still reflects real outcomes for students who were unable to manage their debts, said Pauline Abernathy, vice president of the Institute for College Access & Success, a California research group that seeks to make college more affordable.

"The schools aren't being penalized, but the students still are, and so are taxpayers," Abernathy said.