The highly public and deeply problematic response to Dylan Farrow's OpEd sends a clear message to the 1 in 3 women, 1 in 3 trans people, and 1 in 6 men who have been sexually abused as children. Coming forward about your experiences comes with consequences. People won't believe you. Everything you say will be questioned. Are you sure you want to do that?

The people that benefit the most directly from the public scrutiny of survivors are rapists. We live in a country where it is safer to commit an act of rape that to publicly disclose having survived one. Social norms control behavior. While on the surface, U.S. culture might articulate that "rape is wrong," the social norms enforced by our communities do more to perpetuate rape than to end it. While the overwhelming majority of perpetrators face no consequences for their actions, the majority of survivors who speak out do.

This past Saturday, a public art project created supportive space for survivors of rape and abuse at the U.S. Capitol Building.The Monument Quilt is a crowd-sourced collection of thousands of stories from survivors and an effort to create public healing space. 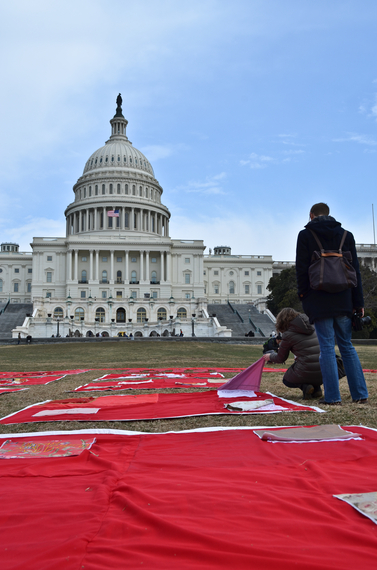 "It's something that a lot of the stories here speak to, in the quilt," said one visitor. "A sense of shame, or silencing or not feeling community or not feeling supported by the people who are closest to you. So I think part of what the Monument Quilt accomplishes is making support public and red and giant and obvious."

Force, the group behind the project, says, "By stitching our stories together we are creating and demanding public space to heal. The Monument Quilt is a platform to not only tell our stories, but to forever change how the US public responds to rape. We are creating a new culture, where survivors are publicly supported rather than publicly shamed."

At Saturday's display, visitors were invited to "SIT, WRITE, REFLECT." One visitor wrote, "I will read, believe and be transformed by every story here. Because I so badly needed an ally to be there for me when I came forward with my own story."

Every social injustice is perpetuated by isolating those who are most affected by it. When people are connected and empowered, they can organize to create change. When people are politically and socially isolated, they cannot. Public shame and scrutiny isolates survivors. Confining survivors' lived experiences to the private realm cuts off their potential to band together. Rape thrives on the silence of survivors and will die only after the pressures to remain silent have been lifted.

While survivors' isolation breeds injustice, survivors connecting creates opportunity for change. Bringing survivors together is political. To that end, the Monument Quilt is designed to be an organizing tool. Survivors can create a quilt square, organize workshops or events in their community, contribute anonymously or publicly, and, on a massive scale, come together. Each piece of the quilt will be gathered together to blanket the National Mall in a final display with the message, "NOT ALONE." 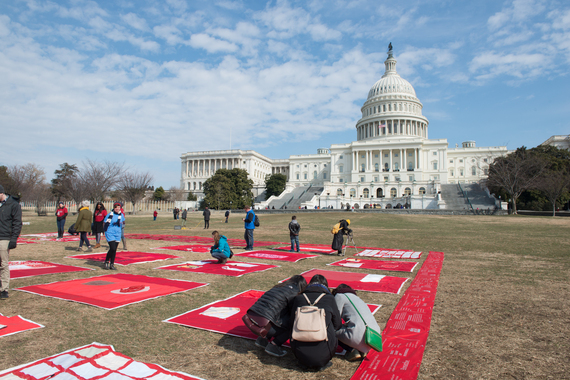 For many survivors coming together facilitates healing. "When I'm around survivors and I see... that they didn't let what happened to them get the best of them, it just gives me the strength to overcome this," said Diomi Miller, a volunteer with the project.

Psychologist and researcher Leah Bolssen says, "Psychological literature provides well documented evidence that women tend to respond best to interventions that are communal in nature... rather than simply individual or 1:1. ...Advising women to go to therapy or deal with sexual assault as an individual problem is, clearly and simply, insufficient."

Most of our models for responding to sexual violence are still private and focus on the individual who experienced trauma. The problem with this model is that the survivor isn't the problem. While survivors need and deserve help, they also deserve systems that place the cause of their psychological trauma and symptoms where it belongs: on rape and the culture that creates it.

One of the main psychological harms of sexual violence is an experience of disempowerment. In sexual violence, one loses control over the one domain we should always have control: our bodies. Creating a healing process that focuses on the power of survivors has the potential to be deeply transformative. Activism can be healing.

In the words of Dr. Judith Herman,

"In the task of healing, each survivor must find her own way to restore her sense of connection with the wider community...We do know that the women who recover most successfully are those who discover some meaning in their experience that transcends the limits of personal tragedy. Most commonly, women who had made the best recoveries were those who had become active in the anti-rape movement. In refusing to hide or be silenced, in insisting that rape is a public matter, and in demanding social change, survivors create their own living monument."

As one quilt participant puts it: "I cannot heal unless I feel empowered. I don't want to be a victim. I can't change what happened to me. I feel empowered the most, when I feel like I am changing the circumstances and the culture that created my abuse."