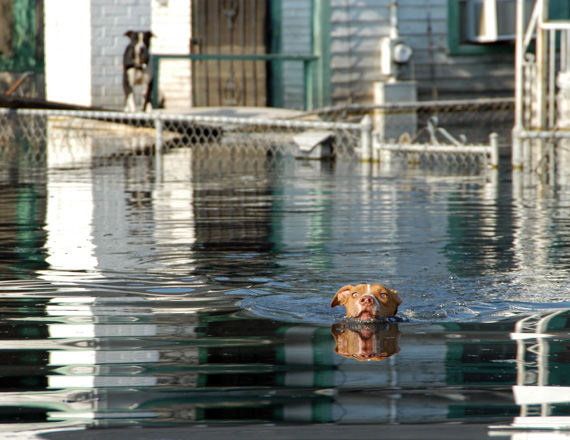 The United States is a nation of animal lovers. Over 82 million households (68% of the population) have at least one pet and the care that we provide for our animal companions parallels the care that we provide for our families and ourselves, whether it's the quality of the food that we buy for our dogs and cats, or the medical care that we give to them. In fact, this year we will spend around $15 billion on veterinary care alone out of a total of about $58 billion that we will invest in the care of the animals who we have invited into our homes.

To say that most people consider their pets to be a part of the family is no exaggeration and shouldn't come as a surprise to anyone. It seems that every few months there is a new scientific "breakthrough" that validates the commonsense understanding that animals have complex emotional and social lives -- that they think and feel and experience love and loss, fear and anxiety just as we do.

And yet, the tax dollars of these same animal lovers are being used to pay for the sanctioned killing of 3 - 4 million healthy pets every year in our nation's shelters. That's more than 9,000 healthy, adoptable dogs and cats every day: 9,000 lives, in the fullest sense of the word, are wasted every day.

Caging and killing homeless pets is not only abusive and cruel to these animals that we value as a society, killing healthy, friendly pets is a soul-destroying activity that has a corrosive effect on our communities.

This situation need not exist at all. No-kill is not only possible, it is the right thing to do and it has already been achieved in communities around the country.

More to the point, it is an essential step in our evolution as a moral society because elevating the value and status of those who are the weakest members of our communities elevates the status and value of all members.

Let me put the scope of this tragedy into perspective with a lesson from Hurricane Katrina.

In the aftermath of Katrina, tens of thousands of animals died, not because of flooding -- that was only the mechanism -- but as a result of the overarching public policy that did not include people's pets in evacuation or rescue plans. They died because neither human emergency shelters nor state and federal evacuation teams allowed people to take their pets with them when evacuated. This policy was often enforced at gunpoint. Some New Orleans residents report being told to leave the dog or it will be shot before your eyes.

I was there, I spoke to people like this almost every day. For four months following the storm, I oversaw rescue and sheltering operations for Best Friends Animal Society at our emergency shelters in Tylertown, Mississippi, and in Metairie, Louisiana. It was an experience that forever changed my life and that of everyone there, whether a victim or a volunteer.

Katrina was on the news 24/7. Dogs and cats swimming in floodwaters, standing on roofs and on top of cars in the baking sun days and weeks into the disaster. The images tore at people's heart.

The world was shocked by the images of animals in distress and thousands of people flocked to the Gulf Coast area to save stranded animals and millions more gave donations of cash and supplies.

And then Congress acted.

In response to the deaths of thousands of pets and the deaths of some human Gulf Coast residents who refused to be evacuated without their pets, Congress passed the PETS Act (Pets Evacuation and Transportation Standards Act), which requires local counties to have a pet evacuation plan in place in order to qualify for FEMA funding in the event of a disaster. Congress officially recognized the importance of people's pets with passage of the PETS Act, and today, evacuation plans and shelters that accommodate the pets of evacuees are the norm.

As a consequence, in natural disasters subsequent to Katrina, such as Superstorm Sandy, the animal component of these events has been manageable locally and has been significantly smaller despite affecting much larger populations. That is a result of a change in public policy that reflected public values.

Katrina was one of the most devastating natural disasters in U.S. history. No one knows how many animals died, but most estimates put the number in the tens of thousands -- 50,000 to 70,000 dogs and cats dead across the Gulf Coast - an unprecedented disaster.

And yet, an animal disaster on the scale of the one that followed Hurricane Katrina is happening every week in our nation's shelters, and it deserves the same urgency of response. Loving household pets, once and potentially future family members, are being killed.

And as with Katrina, we have the resources and practical know-how to put an end to this pointless killing in the foreseeable future, and that knowledge and know-how are what constitute the essentials of the no-kill movement.

We can Save Them All, but it's a matter of prioritizing the lives of shelter animals. Changing public policy to reflect public values -- as we did following Katrina, with lifesaving goals set by local city councils -- would accelerate the lifesaving.

In communities (such as Austin, Los Angeles, Salt Lake County and West Valley City, Utah) where local civic leaders have set no-kill goals for local animal control agencies, no-kill has been or is being realized. In other cities -- such as Reno, Nevada; Kansas City, Missouri; and Charlottesville, Virginia -- lead sheltering and animal control agencies inaugurated successful no-kill campaigns on their own initiative.

If national news crews covered municipal animal shelters, as they covered the animals following Hurricane Katrina, no-kill policies would be the norm in a very short time.

We can Save Them All and we will be a better country for it when we do.