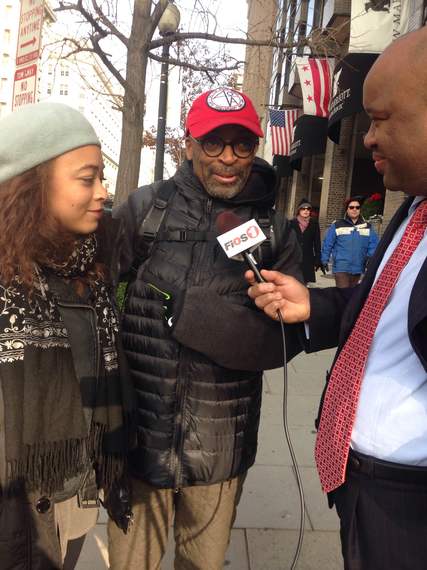 To discuss my encounter with Spike Lee at the Washington, D.C. weekend protest, requires first going back to 1989. I still remember that day 25 years ago, appearing on the very popular public affairs TV show on WCBS in New York, titled "Sunday Edition" and hosted by legendary NY Anchorman Jim Jenson.

New York's Mayor at the time, Ed Koch, who made a trademark of asking constituents, "How am I doing," was viewed as a highly polarizing figure. He was concluding his third term at City Hall, and Koch in his own theatrical way was on fire in terms of criticizing Spike Lee's new movie, "Do The Right Thing."

Koch was predicting Spike Lee was inciting a riot with his new blockbuster and here I was on "Sunday Edition" to defend Spike Lee. The movie "Do the Right Thing" starred Danny Aiello, the owner of a pizza shop in a Brooklyn black community. Spike played the character of Mookie. In the movie, there is simmering racial tension, and on the hottest day of summer, there is a near full riot. New York Police respond, and the character "Radio Raheem" ends up in a chokehold by one of the police officers and dies.

Some make the case it is very similar to the Eric Garner NYPD case 25 years later. In other words, that Spike Lee predicted the future in a movie.

Over the years, Mayor Koch and I would go on to develop a friendship. He always took pride considering he recommended me for my first TV job. We would later do a weekly TV segment for years on NY1 News called, "The Wise Guys," and he would give me personal advice. The larger than life mayor even had me over to his apartment, but on this Sunday Edition show, while he was still mayor, it was my job to talk about how real was the movie. It was my first TV appearance, and my wife Marilyn Carter was so nervous, she covered her eyes as the show started. I was on with Joe Klein who would go on to write the novel Primary Colors.

So now, here we are all these years later in Washington D.C.

Wearing a red "40 Acres and a Mule" cap, (the name of his company) a Nike black down jacket completely closed on this brisk day, and of course his trademark glasses, Spike, also wearing a backpack, is standing in front of me on Pennsylvania Ave. At his side, his daughter Satchel, who does photography work. I have interviewed Spike many times over the years on TV, but on this day he was among the thousands of protesters in the nation's capital. Spike told me: "I had to be here. When Rev. Sharpton said we were marching, I said let's go." The conversation went like this.

Why are you here, Spike, I asked.

"Something has gone amiss in this country as far it goes in the judicial system, the relationship between communities of color and police departments."

Spike Lee's daughter Satchel chimed in: "I'm here to try to find justice for my brother. Not only my younger brother who is 17, who could have been one of these men that was brutally murdered, but my brothers you know. This is really important, and I'm happy and proud to be here."

And then Spike added, "You have people out here of many walks of life. Professionals, people just getting by. This is very Diverse. Not just African Americans up in arms. I think that all progressive Americans are up in arms. White, Brown, Yellow, Asian, we're all up in arms. All young people protesting all across this country, all the world."

What is your message to America today, I asked finally.

"I'm going to use two words I have used a lot in my films, WAKE UP!"

But on this day, as the thousands in a very peaceful march made their way from Freedom Plaza to the Capitol, the emotional part for this journalist was when I talked to Esaw Garner and the father of Michael Brown. Mr. Brown wearing his St. Louis Cardinal's baseball cap, was very subdued. He was very sad. When we talked, each word was deliberate.

I found myself in a very, very difficult position. I thought to myself, how do you ask a father about seeing his own son dead on the ground

Mr. Brown briefly paused for a second, but it felt like 2 minutes.

"He was laying on the ground for 4 and a half hours."

I looked deep into Mr. Brown's eyes, and could actually feel his pain. In that second, I found out he was hurt in a way that he will never recover.

At that point emotion took over for Mr. Brown. Choking back tears, Mr. Brown abruptly said "Thank you" for the interview. His only choice at that point was to walk away before crying on camera.

As a father myself, I had to respect Mr. Brown walked away. How would I, or any other parent respond.

Since more than 25 years ago, when I started my career appearing on "Sunday Edition, I have done many things as a journalist and traveled the world on assignment.

Except for on the big screen, it had been a long time since I had seen Spike Lee. But it was the encounter with Michael Brown Sr. that I will never forget. On this day in the nation's capital, Michael Brown Sr. talked of the personal toll all this has taken on him. It was heart-breaking.