Story and Photos by Catherine BauknightPublished in the Pasadena Weekly, 05.29.14

On June 3, 1989 I arrived in Beijing to cover a student-led pro-democracy movement in Tiananmen Square. As soon as I arrived I went straight to the square and discovered that it was filled with college students riding bicycles and handing out flowers to soldiers watching the protest.

Less than an hour later, soldiers made their first demand: "Leave the square or we will shoot to kill."

Thousands of students who were peacefully congregating, some who had camped there for weeks, flowed to a different section of the square. I stayed with the students, many encouraged me to photograph their protest, "For the free world," they would say in English.

When the students did not leave, a second warning was issued. No one believed the threat to be genuine. In a few moments, however, popping sounds in the distance signaled a pivotal moment for the students: Leave, or stay and risk their lives for democracy. 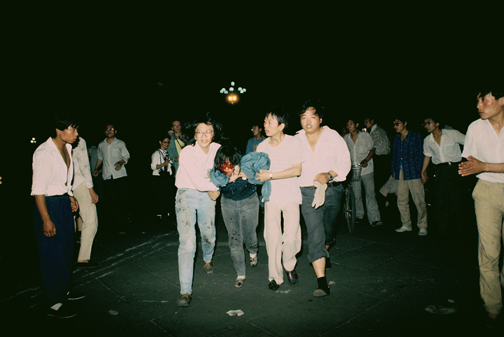 Shortly after that, soldiers began shooting into the crowd. Most of the protesters remained in the square, committed to human rights in China. Some people quietly fell to their knees. Many were bleeding as the gunfire continued. Those who were not shot or injured helped the wounded into ambulances attempting to get through the crowd. People gathered around a young girl who had been shot in the head and were trying to help her out of the square. She saw me standing in front of her with my camera directed at her. Somehow she found the strength to raise her head for me to get a better shot of the blood streaming down into her face. She was then carried off and disappeared into the masses.

I was guided through a human tunnel where people pushed me toward other locations in the square.

Looking down on the massacre of the youth was a surreal portrait of communist leader Mao Tse-tung. One area I was led to revealed a well-dressed young man, unarmed, who also had also been shot in the head. He was dying while others watched in disbelief. 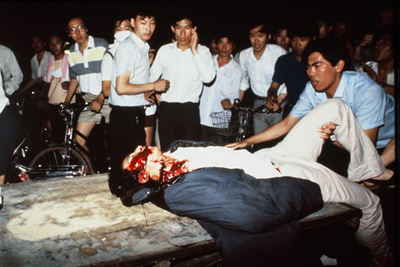 Yet, it seemed protesters were not afraid. They did not panic, but stood firm in their vision for a democratic China. Time seemed to stand still. As bullets ricocheted off the walkway, I joined the throngs running in the same direction to escape being shot.

When I returned to the hotel I was stunned to find that the bloody demonstration had not been mentioned on television. Instead, the Beijing Circus was broadcast for hours on all state-run TV channels. Telephone communication was cut off, and I was told a few hours later by another photojournalist that the Red Cross reported 3,000 people had been killed.

My film was taken by another photographer to Air France, the only airline still flying, the morning of June 4. It was flown to Paris, then to New York before being released to the world. I was one of four photojournalists covering the massacre.

I remained in China for 10 days. During that time, the streets of Beijing were lined with soldiers. I was picked up by the Chinese police but released. Martial law was declared. There was no safe public transportation without risking detainment, imprisonment or death. I was escorted from a train in Beijing by an armed American Embassy representative, who led me and others trying to escape to a bus that drove us to the Beijing airport. There a jet had been arranged through a congressman to fly U.S. citizens to San Francisco.

This year marks the 25th anniversary of the Tiananmen Square Massacre, a time to both reconsider the Chinese government's disregard for human rights and honor the students and others who died for this noble cause. 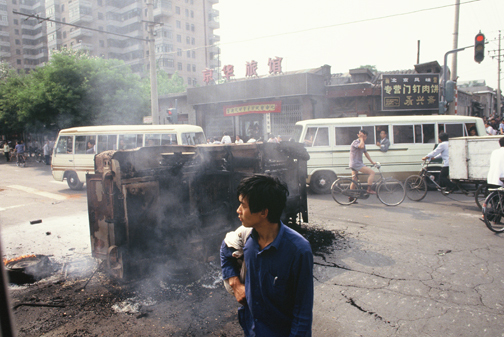