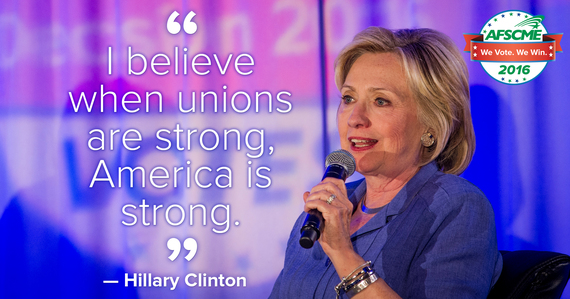 Public service workers are following the presidential election closely. We care deeply about our communities, and we know all too well the terrible costs to working families when corporate-backed extremists take the reins of our government.

We see this election as one of the most important elections in our lifetime. The next president will determine if CEOs and corporations can keep manipulating the rules in their own favor, or if working people will get a fair shot at sustaining our families and getting ahead, not just struggling to get by. The person we elect president next year will make decisions that could make or break the middle class.

We can't afford to elect anything less than a proven fighter who has what it takes to both win at the ballot box next November, and be an effective champion for working people in the White House. That's why AFSCME members chose to endorse Secretary Hillary Rodham Clinton.

AFSCME members across the country have spent the past six months engaged in the most in-depth endorsement process we have ever undertaken. We gathered feedback and fostered discussion through personal conversations, live-streamed town hall meetings, polling and engaging our activists directly in the decision-making process at national meetings in San Diego, Albuquerque, Washington, St. Louis and Indianapolis. When it came time to decide, our process delivered a clear choice.

Public service workers want a candidate who is committed to fixing our out-of-balance economy, raising incomes for hard-working people who are still struggling to make ends meet, reining in the CEOs and corporations that manipulate the rules in their own favor, and creating good jobs that provide wages and benefits that can sustain our families. These are exactly the issues that Hillary Clinton has been fighting on her whole life.

Hillary Clinton is a proven fighter who, as president, will live up to her word to tackle the issues that affect our quality of life, such as paid family and sick leave, the crippling burden of student loan debt, and protecting the retirement security for all working and retired Americans.

And Hillary Clinton's record shows that, like a clear and growing majority of Americans, she understands that unions are part of the fabric of our nation and they are integral to building an economy that works for everyone. She will support the ability of working people to join together in strong unions and stand up together for wages and benefits that can sustain our families and strengthen our communities.

It's clear that whomever becomes president will either save the American Dream for the next generation or relegate it to their school history books. Think about the challenges we face already -- our economy has swung out of balance, almost no one stands up for ordinary Americans anymore, and there's a case facing the Supreme Court that could make the situation even worse for working families. Friedrichs v. CTA is the next in a long line of attacks on the rights of working people to organize and speak up together for improvements on the job, and better wages and benefits.

Regardless of the outcome, the extremists and special interests behind this case will not stop their efforts to make it even harder for working families to get ahead. The next president will appoint three, possibly four justices to the Supreme Court bench, and shape the future of the middle class for decades to come. That's what this election is about -- the ability of working people to sustain our families -- not attack ads and controversial soundbites.

The CEOs and corporations who have spent years and billions manipulating the rules to suit their interests certainly will not be sitting this election out, which means working people can't afford to tune out either. The only power that can counter the influence of their money is the power of our voices, and the power of our communities coming together. That's why we're not waiting a day longer to start mobilizing and organizing, and that's why we're supporting Hillary Clinton.