Let's face it. The Republicans will have quite a time trying to sift through their thicket of candidates. So many angles and issues and characters to consider. Do I like the clean-cut union-busting Wisconsin governor or the clean-cut anti-choice former Senator from Pennsylvania? The African-American brain surgeon that called Obamacare the worst thing in this nation since slavery or the US Senator who railed against the law with a filibuster reading Dr Seuss' Green Eggs and Ham. Choices, choices, choices.

Compounding the issue is that with now 16 candidates declared, they all can't fit on a debate stage, forcing Fox News into a rather arbitrary approach to cutting it down to 10, with a variety of polling numbers and other stats that may not be an indicator of anything.

Such an abundance of ridiculously scary choices must be overwhelming for a Republican voter. It just don't make no plain sense. Which is why I offer an equally arbitrary and nonsensical -- but thoroughly more entertaining approach to solve this problem: Bracketology. 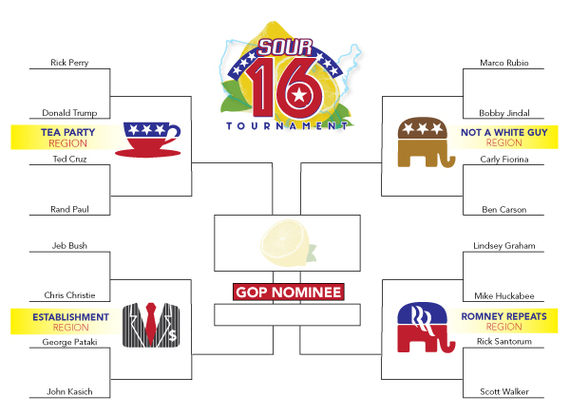 That's right, perhaps its time for the GOP to try something new and do away with the traditional primary system. That's going to take a lot of time. All of the back and forth of who's up, who's down, who said the stupidest thing this week, polling results swinging wildly. The Super PACs will be tripping all over themselves, switching allegiances, placing new bets on who to manipulate. They've got 16 now. Its totally bracket-ready. Its tourney time! One-on-one elimination debate match-ups until one person is standing. We could be down to 8 candidates in one weekend!

To get this done right, the first thing that has to be done is to create regions and seeds, just like the NCAA basketball tournament. We'll have to make those out of whole cloth (but it's a crazy time right?) so I'd offer the following as what works out to be some fairly logical regions:

Now who goes in what region could be up for debate - and arguably some candidates fit into more than one region -- but we've seen things like my University of North Carolina Tarheels being placed in the West Region of the NCAA tournament at times which also makes no real sense.

I'm not going to get too deep on speculating about seeds and rank within a region, you can have fun with that at home. That said, you could probably argue right now, the #1 seeds in each region might be Trump, Bush, Rubio and Walker respectively. How's that for a Final Four scenario for you?

Naturally, there's always a wild card or two that messes up everybody's bracket projections. Who would be the Cinderella story? Which #1 Seed would get taken out in the early rounds? Who would we remember making the best dunk of zinger in the tournament or the verbal last-second 30-foot jump shot?