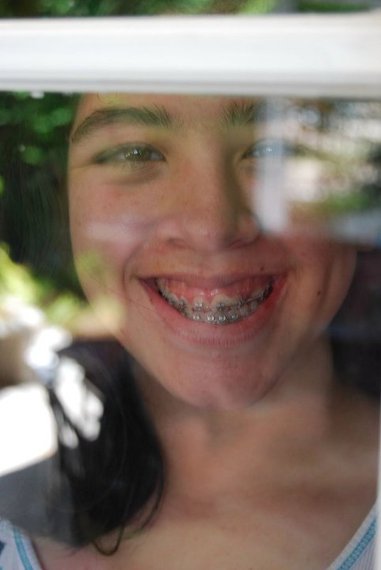 Back in September, I spent a morning trying to put together information for my daughter to attend college. My daughter will be finished with the traditional school system in December 2015. I can't believe she will be 22. This may seem like no extraordinary thing to some of you, however for me, it was a day I never thought I would get to experience. My daughter is autistic.

Through her years, I felt like I was somehow missing out on all the things that other parents got to experience with their children. Things like the prom, teaching them how to drive, or listening as they spent hours on the phone chatting with their best friend.

When my daughter was little she did all of the dance, soccer, Brownies, and karate classes, but as she got older in age her youthful mind remained the same, and her peers no longer wanted to play hide and go seek. This broke my heart, as all a Mother wants for a child is the very best and for them to be happy. Unfortunately the older she got the harder it became, and the more tired I got.

Life should not be such a struggle...

For those who have "A Typical" children, you are lucky for the opportunities that are open for your young adult children. There are not a lot of resources for young adults with disabilities available in Florida. If they are under 19 things are pretty accessible. It is on their 19th birthday that a whole new way of living becomes your norm. You have to fight for their rights and jump through hoops that even some lawyers are baffled by.

As frustrating as things are, that one day in September was different. I for once had that feeling of what it was like to accomplish a milestone with my child. I got to help my daughter fill out scholarship forms for college. We had to get personal letters of recommendations, solicit work and volunteer recommendations, gather school records, and fill out tons of paperwork.

I will be honest, up until the night before I was feeling like it was just ONE MORE thing that I was responsible for doing. The incomplete paperwork that sat on our desk untouched reconfirmed my thoughts. Being frustrated and tired I went to my room to rest; it was then I overheard my daughter speaking to her father in the other room. He asked her to sit down at the kitchen table and write in her own words what her goals were, what she enjoyed doing the most, and why she thought she should be accepted into the PALS Program.

The PALS Program was created to provide further education to young adults like my daughter who lived in the Pensacola, Florida area. An individual education plan is created for each student based on their abilities, they get to attend a regular college, and they are given a buddy to assist them in navigating classes.

After my daughter completed answering the questions her father asked her to write, she walked into my room and placed one single sheet of notebook paper on my bed, and quietly walked away. I looked over at the paper curiously wondering what it said. Picking up the paper, I began to silently read how my daughter described the answers to the questions that were asked of her earlier. Tears began to stream down my face as I read what she wrote. And, at that moment, I no longer dreaded the next day.

"I learned my daughter might not be able to communicate or express herself like others...but she can do it in her own way."

In the letter, she expressed her desire to someday be on a commercial with the dancers from the Disney Channel. In the past, I would have brushed her dream aside, and attempted to steer her towards a goal that I thought would be more realistic. That night it dawned on me that my daughter wanted to achieve this goal because the people on the commercials were all laughing and having fun with each other.

She wants to be happy just like we all do...

As I read further my heart began to break. My daughter shared she wanted to meet new people and learn new things. She wanted friends. Her Dad is her best friend. He has all the patience that I never had. Though he claims that I am more versed on certain aspects when it comes to getting things accomplished, I have grown to realize... that it is he...who truly holds the wisdom of life.

When my daughter does something totally outlandish her father makes a joke out of it. The most recent thing she did was she tried shaving her eyebrows. Her Father laughed about it. I, on the other hand, scolded them both, letting them know that people would make fun of her. He always finds the positive and good things when it comes to dealing with our daughter.

Earlier in the year I got upset that her father continued to buy her coloring books. I felt like he was holding her back from advancing into adulthood. I stated that she needed to do things age appropriate. In July Fox News wrote an article about adults using coloring books as a way to cope with stress in their life. It was one of the many times I had made an uninformed judgment call. I believe my daughter's Father understands and connects with her in a way that I never will.

Reading my daughter's letter made me realize that she understands things more than I gave her credit for. She wrote that sometimes we don't get along at home, and she wanted to learn how to better get along with others. Her ability to recognizes she has struggles and wants to work on them says a lot. I realized she was asking for someone to believe in her, and to help her learn to be who she was meant to become. It takes a big person to admit they have faults and actively express that they want someone to help them.

After reading her letter, I wrote one of my own to the college. I told them that they might read in her letter that she was a young woman who could not communicate as defined by society's norms, but I had an advantage over them. I have had 22 years of life, and 9 months of carrying her next to my heart. I believe in her, and her dreams, and I hoped that they would possibly consider her for their scholarship. Of course, I put more details into the letter than I share here. My letter was two pages long.

Sometimes life sneaks up on us and surprises us with signs to its hidden gifts. My sign was a letter my daughter wrote and placed on my bed one September evening. It challenged me to put everything on hold and make that day all about my daughter. I learned that the things I put aside were not life changing. Those things still remained. What was and could be life changing was the time I made for my daughter.

If you are a parent of a young adult with Autism, I know the struggles and emotions that you might encounter from day to day. I can also tell you that in between those moments of frustration if you look hard enough-- you will find hope--hope for you as a parent, and hope for your child as an adult.

You also might realize that your child's hope for themselves might not be the hope that you wish for them. If you come to accept this, you will learn, that you and I are not much different than the parents of "A Typical" children; they too often have different hopes for their children than their children have for themselves. And, they too learn to realize that it is not their life to live. We are given the job to guide and direct our children. It is their job to use the things we gave them to find a place for themselves in this world.

Wishing every one a Magical day full of Hope!