Gabby Giffords quietly mouths "Twinkle Twinkle" and we celebrate. Simple success while we continue to argue about the weapon that took her voice.

We Americans love our guns. We love 'em. We don't just feel they're a Right, a necessity, a possibly delusional buffer to our safety, we're freakin' PASSIONATE about the things. We demand the freedom to buy as many as we want, we resist attempts to regulate them; hell, we'd marry 'em if we could but that, of course, would trigger (no pun intended) the anti-gun-marrying lobby and that's a whole other subject. 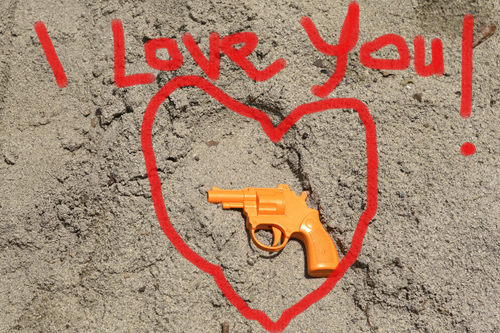 Why the love affair? It seems to me that Gun Love has proven to be as high-maintenance, wildly erratic and patently dangerous as that hysterical, potentially bipolar chick who feels absolutely essential but ends up trashing your living room and leaving hateful messages on your boss's voice mail. Dysfunctional, but still the love. Why is that?

History, I suspect. They're part of American DNA. They won us the Revolution, conquered the West, and kept us in meat products. We needed guns, they were essential to this country's very survival and in certain quarters (law enforcement, hunters, collectors, Olympians) they remain relevant even now. But beyond those rarified groups, what have they done for us lately?

The National Safety Council investigated the likelihood of dying from firearms and determined that over the course of a lifetime, death by assault from firearms is 1 in 309. In fact it was recently reported that shooting deaths of law enforcement officers are already up from last year. I have to ask: if law enforcement officers, better armed than the average citizen, can be so easily victimized by guns, really, who can argue that possession is an effective deterrent?

Gun Lovers can. Lulled by the placebo effect of their trusty loaded companions, they'll argue it till the day is done. The rest of us just wonder why so many people are being killed by them.

Don't get me wrong, I'm not advocating that people not be allowed to have guns. Frankly, I don't care. Have as many as you want, stash them in your bunkers, your kitchens; your cool, hip-hugging, open carry gun belts. Talk about them a lot on the Internet, sleep better at night convinced you're safer, rally at gun shows dressed in camouflage while spouting bromides about the 2nd Amendment and what pussies Brady Bill proponents are. Take your kids to shooting ranges for jolly good family fun and teach them to love the power of guns while listening to "Cat Scratch Fever."

Relax. We get it.

What you need to get? That there are a whole lot of us out here far less concerned about your love affair than the hideous numbers of mass murders, assaults, rapes, spousal abuse events and other violent gun crimes perpetrated by crazy, pissed off people who love guns as much as you do. Go ahead, say it: guns don't kill; people do...blah, blah, blah. But tell me, how many people do you think the Tucson shooter would have killed or injured with just a knife or a baseball bat?

At 250-280 million (American Firearms Institute), there are too many guns in this country and too many crazy people using them. Regardless of what the framers had in mind when they penned the 2nd Amendment, they could not possibly have envisioned the world in which we now live or the madness that has been perpetrated by the rabid misinterpretation of their intent. The ass-kissing that is politically de rigueur with the NRA and the pro-gun lobby is appalling and shameful because no one -- NO ONE -- should be unwilling to honestly look at the destruction caused by guns and come to the table to discuss effective solutions. If I were a Gun Lover I'd demand those solutions so that my right to own a gun would not be any more impacted by the actions of crazy people than it already is. Fear, ego, machismo, xenophobia, fundamentalism, paranoia, conspiracy theorism and downright ignorance have ruled the day when it comes to gun control and I say, GET OVER IT.

Your need to possess is petty as a nit compared to the human, decent urge to prevent tragedy and truly attempt to make the world a safer place, not just in your gun-protected home but in the schools, businesses, airports, post offices and meeting places of this country. No one wants to pry the gun from your hands -- cold, dead or otherwise; we simply want sensible and effective controls to be uniformly enforced so that fewer of our children die in the parking lots of the neighborhood grocery store.

For any of us, Gun Lovers and Others, that should not be too much to ask.

This post has been updated from a previous version.