Who has not heard of the settlement? Vibram was forced to settle a class action lawsuit for millions for making health claims they could not back up regarding the use of their signature minimalist footwear: Vibrams FiveFingers, or VFFs.

I'll try to explain why this was a necessary adjustment, why I love VFFs and will keep using them, and what this whole thing means to members of the loose, yet very real, barefoot movement. 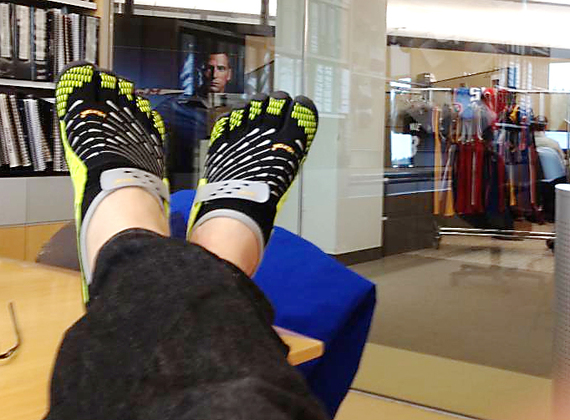 A classic VFF-selfie taken between meetings with a client

I was born and raised on a kibbutz in Israel. We spent our sunny days there free as little birds, mostly outdoors. The rooms were small, the meadows were lush and expansive, and shoes were hardly ever necessary, and hardly ever on. We went to class barefoot, had our meals barefoot and hiked barefoot. There were no statements to make and no one to point out the dangers or make a fuss. No one cared.

Thirty years later (about five years ago) I started running. First at the track. I thought that counting your distance in miles was something professionals did, so when I could run four, five or six times around the track, and it felt good, I was ecstatic. I soon realized that as long as I kept my pace at 9-10 minutes per mile, I could just keep on running.

At the same time, I would come back home with foot pain. Sometimes it was so bad I could barely walk for days. I started reading about it and, forgetting my childhood ways, I fell for the notion that the solution was a more expensive shoe. Four pairs and hundreds of dollars later - more pain.

One sunny Saturday, my wife and I were walking to our favorite restaurant for lunch. She asked me how running was going, pain, shoes and all. I told her that I just knew that there had to be a simple solution to it and that getting more and more padding just didn't seem right.

And then -- serendipity. We walked by a yard sale where a guy was selling his $150 pair of Asics for $5. WHAT? I immediately tried them on, but although they were my "size," they didn't even get on my oddly wide foot. We struck up a conversation. Michael was a Chi Running trainer. While he wasn't running barefoot himself, he suggested that I try racing flats and introduced me to VFFs and to the whole notion of running barefoot, including the book Born to Run.

It was as if I'd been shown the simplest and most sensible solution that was right there in front of me the whole time. I got my first pair of VFFs that day, and Michael and I have been friends ever since.

From that day on I only ran with VFFs. My distance grew from two or three miles to six, then eight and ten. No pain. I ran a half marathon and felt amazing, and then 15 and 20 miles. Then, one day about four years ago, in a middle of a run down Angell Street in Providence, I inexplicably stopped and took off my VFFs. I kept on running and never looked back.

I had become a barefoot runner. 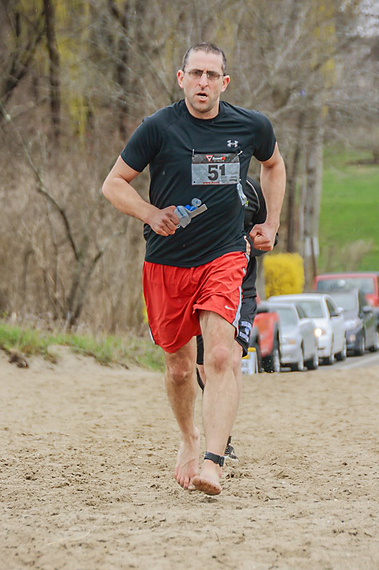 Instead of throwing my VFFs away, I got more pairs. I started using them exclusively wherever I didn't feel comfortable being barefoot. I wore them to the grocery store, to New York City for important client meetings and on international trips. I still get plenty of use out of my five colorful pairs of VFFs, but running and walking around town I do barefoot.

So what does this settlement mean to me and many barefooters like me? Mostly nothing.
For us VFFs are an amazing utility. It allows us to be as barefoot as we can be in a footwear-obsessed society. We wear them, we love them, we stink them up and wash them, and we always will. 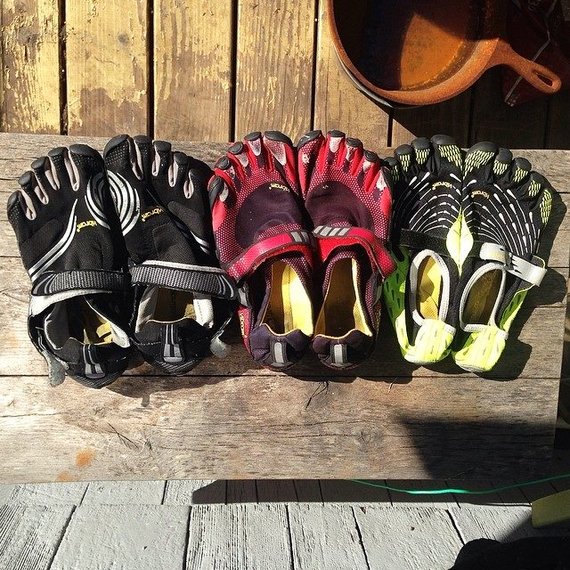 My shoes sun-drying after a good soak in Efferdent
So what did Vibrams do wrong?

In an act of naive stupidity, Vibrams thought only to highlight the potential benefits of their newly invented miracle shoe. Who could possibly get hurt? Well, people did get hurt.
How is it possible, though, that taking off thick layers of protection without properly changing your form or running style, or easing into the new footwear, could possibly harm anyone? If you sense a tinge of sarcasm here, you're right. Buyers should have been advised about how to transition to their radically different footwear and warned that injuries could occur. The company was careless in this respect. Minimalist footwear is not for everyone, and while many can benefit from it, if the shoes are used incorrectly, wearing them may hurt you.

Although Vibrams has paid the price, and rightfully so, I believe that the brand will only get stronger in the long term. Consumers looking for a quick fix may move on to the next trendy thing, but for those of us that get high on the textures of the city and the feeling of nature beneath our bare feet, VFFs will always be the footwear of choice.

This settlement will force Vibrams to tweak their message and galvanize their client base. It's been a painful lesson but it almost had to happen. 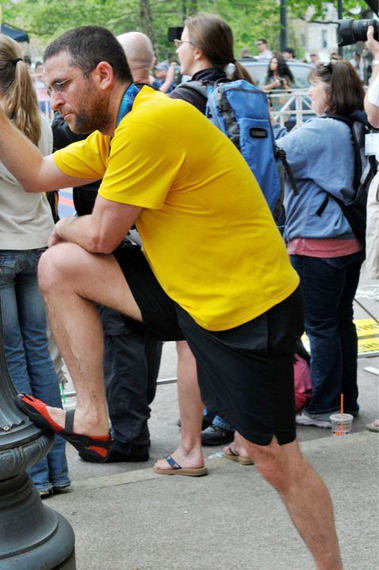 Stretching after the 2011 Cox half marathon in Providence, RI, which I still didn't run completely barefoot.

The day after the lawsuit I was approached by a woman who said: "I heard those were actually bad for you." I explained that misusing anything can be bad for you.

I've read through demeaning and sometimes abusive comments on forums pointing out how idiots like me "fell for the scam" or were "lied to by another corporation" and are now shamefully returning their pairs hoping to be accepted back into the fold of normal society.
There are enough people who post their ignorant opinions -- don't be that guy...

Let it be known that the path to minimalist shoes or barefoot running is not through seeing a claim on a company website, but rather through consideration and proper training. It is not a quick fix and should not be followed like a trend.

But for all of you that want to try running barefoot -- take it slow! Buy a pair of VFFs and wear them around the house or for short walks. Learn a low impact running technique such as Chi Running. Take them for a spin on the track. Get a running coach. While there are some hidden dangers, they can be easily avoided with the right approach. I'll look for you on my next road race.