With Republican party leaders so constrained by ideological blinders that none of their positions is likely to produce gains among non-white minorities, especially Hispanics, the GOP is finding it has no real alternative but to revert to a "white voter" strategy.

To some extent, it's working. The party's opposition to President Obama's agenda -- particularly his cap-and-trade energy proposal and health care reform plan -- is resonating strongly with disaffected white Democratic voters. Republican grievances about Obama, combined with race-baiting commentary from the far-right ideologues who have become some of the most dominant voices of the modern GOP, have led to a precipitous drop in the president's approval ratings among whites.

It's all very reminiscent of the party's notorious Southern Strategy, which carried the GOP for decades. But that strategy backfired spectacularly in the 2006 and 2008 elections, and there's no reason to think it will work any better in 2010 -- especially given the ever-growing importance of the minority electorate.

In this respect, even if the GOP picks up a few House and Senate seats in 2010, many of the party's top analysts believe that it will remain mired in minority status through 2012 and beyond. Other analysts say it may even decline to the level of a minor regional party, with its only real strength in the South.

The Appeal to White Voters

The appeal of the anti-Obama agenda has proven to be particularly strong among whites of low and moderate incomes. The Pew Center, tracking evaluations of Obama's job performance, found in a July 30 report that there "has been essentially no shift in opinion among affluent whites [but] among whites with annual family incomes of less than $75,000, Obama's approval ratings have declined substantially (from 57% in June to 47% today). Assessments of Obama's performance remain high among African Americans (85%)."

ABC News polling similarly found in late June that the possible costs to consumers of cap-and-trade legislation "are particularly important to less well-off Americans. Among those making less than $50,000 a year, support for regulating greenhouse gas emissions drops by 17 points (from 75 percent to a still-majority 58 percent) if it raises prices; support if it costs $10 a month is 49 percent; and at $25, just 35 percent."

The trend lines reported by Gallup are perhaps the most striking: At the start of this year, during late January, Gallup found that Obama's job approval ratings stood at 63 percent among whites, 86 percent among African Americans, and 74 percent among Hispanics. In the Gallup survey taken in late July, Obama had gained 9 points among blacks, reaching 95 percent job approval, and was holding his own among Hispanics, dropping a statistically insignificant 2 points to 72 percent.

Among white respondents, however, he had dropped 16 points to 47 percent.

These findings are reinforced by recent trend lines emerging in the Wall Street Journal/NBC polling series.

In that series, the decline has been sharpest among white men, whose approval-disapproval ratio fell by 27 points, from 50-36 to 40-53.

Republican pollster Bill McInturff notes that his party must make substantial gains among Hispanic voters or be relegated to minority status. But that just isn't likely.

With a solid majority of Republican senators opposed to the appointment of Sonia Sotomayor, the first Latina nominee to the Supreme Court, and a solid phalanx of adamant Republican opposition to any immigration reform which provides a path to permanent residency of illegal immigrants, the GOP has no real chance of increasing its share of the Hispanic vote.

In the short term, McInturff and others point out that virtually all the Democrats' vulnerabilities are among Anglo voters, especially white men. These trends are likely to produce some victories for Republican candidates in 2010, but the party continues to have long-term problems in building a sustainable election-day majority.

President George W. Bush and his top advisers were acutely aware of the long-range limitations of a "white" Republican Party. Bush, in his appointments and some of his policies, sought to reach out to the crucially important Hispanic electorate, most significantly pushing for immigration reform that would have provided a path to permanent legal residency and possibly citizenship for millions of undocumented immigrants in the country.

The effort paid off for Bush in 2004, when he received 44 percent of the Hispanic vote, a Republican record.

In 2005, however, Bush's use of the immigration issue as a vehicle to win over Hispanics imploded. Republican members of Congress overwhelmingly rejected the proposal, often using language suggesting Hispanics did not share American values and other comments that angered and offended the Hispanic electorate. In the 2006 elections, only 30 percent of Latinos voted Republican, and in the 2008 presidential election, the Republican candidate, Sen. John McCain, got just 31 percent.

The Republican Party thrived between 1968 and 2000 primarily because of the gains it made among white voters, especially among formerly Democratic working-class whites, a disproportionate share of whom were men. By 2000, however, the GOP's white strategy began to run out of gas, as the white percentage of the electorate dropped to 80 percent and below.

Nate Silver, a sports statistician and political analyst, looks at this from a different vantage point:

Silver points out that Republicans are getting slightly less dependent on white voters, but Democrats

are becoming less white at a much faster rate than the Republicans. Whereas 85 percent of their votes were from white voters in 1976, the number was just 60 percent last November. This is, of course, a helpful characteristic, since the nonwhite share of the electorate, just 11 percent in 1976 and 1980, represented more than a quarter of the turnout in November. 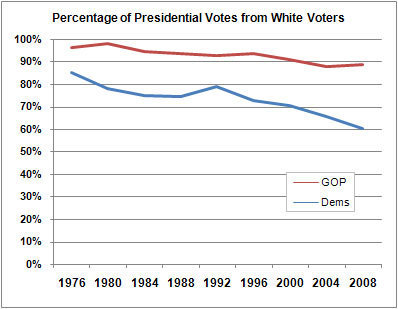 Emory University political scientist Alan Abramowitz has, in turn, tracked the growth of minority votes cast in presidential elections since 1992 and finds: 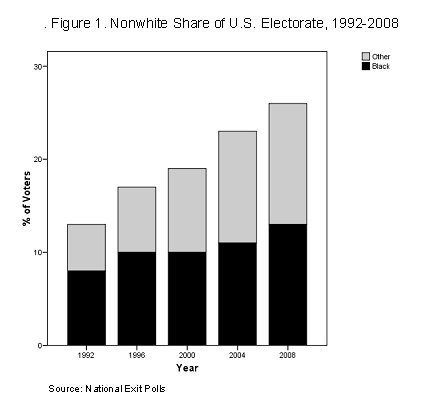 For the Republican Party, these trends not only illustrate the danger of attempting to win without improving margins among minority voters, but also the danger that a modest collection of Congressional wins next year - say 10-15 House seats --will only reinforce the dominant forces in the House and Senate wings of the GOP that adamantly support a conservative agenda that precludes concessions to minority groups. That, in turn, would increase the likelihood that the Democratic Party will be able to maintain majority status in 2012 and beyond.