UC Berkeley has one of the best Computer Science programs in the world.

The CSUA Hackathon is "a night of fun programming where you get to explore new technologies and build things for no reason other than enjoying learning and making something cool," said Corey Reese, CEO of Trumpet Technologies.

This year, we were treated to a few clever twists on the basics: several of the hacks used JavaScript, NowJS, Java, or Python, and were predominantly for web only. There was less of a focus on search engines and mobile apps, as compared to the Yahoo Hackday which the CSUA held in September 2010.

After coding for 16 hours straight, 10 student teams were ready to present their brand new projects. Ian Davis, Events Coordinator for the CSUA, introduced the teams.

Winning Team
Black Flamingos
Akshay Kannan, Pranava Adduri, Ryan Loebs, Hike Danakian
Built jsCompute, a well executed distributed computing platform that works on the browser using JavaScript. Their demo showed that the animation at http://goo.gl/wmsua can run at full speed in the background while you're doing other tasks like say, 50 runs of a 10 variable integration computation of Pi using the Monte Carlo method. All of the judges praised the team for the technical merit of the project. "It had a new take on an existing problem, a clear purpose, and flawless technical execution," said judge Steven Schlansker.

The reaction from the winning team: 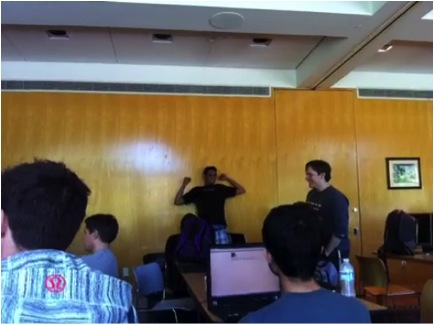 Elegant Abstraction
Blarg
Jonathan Ewart, Tikhon Jelvis, Valerie Woolard
Built a JavaScript library for making card games. Their demo included 3 fully functional card games built from scratch using their own library. One of their card games had card decks that could be dragged and flipped, yet required fewer than 100 lines of code and elicited "oohs" and "ahhs" from the audience. The judges thought the abstractions were executed cleverly and properly.

Utility
Tab Sync
Nishant Bhat
Built an extension to Google Chrome that automatically syncs one browser session between machines in different locations. It uses the NowJS library, a web framework for building real-time web apps in JavaScript (built by former Berkeley students and Y-Combinator alumni Darshan Shankar, Eric Zhang, and Sridatta Thatipamala). Tab Sync was applauded as being small, simple, and useful, and the judges were impressed that Nishant built it by himself.

Educational Value
There's No Place Like ~
Jessica Pan, Hoa-Long Tam, Joshua Evenson, Ryan Abrams
Built a GUI shell interface that helps beginners learn how to use the Unix shell in a visual way. The premise is that new CS students have a hard time learning shells like Bash and SDK, so the interface allows users to enter commands in the shell itself. The team hopes that users can better understand a command line when they see the associations between the user interface and the command line. Team member Jessica Pan has been an active member of the CSUA and made posters and generated publicity for the Hackathon before she started hacking away over the weekend.

Cool and Weird
Eigen Value Decomposition
Warren He, Jian Chen
Enables websites to be turned into 3D experiences. It uses linear algebra to make an isometric projection of almost any webpage, like Tumblr or Yahoo. It stretches and crunches websites in a 3D manner, which the team believes would be great for helping web developers see how a webpage is built. It works on Firefox and Chrome.

The other competing teams were applauded for their heroic efforts:

MatchMaker
Joy Yang, Avik Das, Luke Rast
A Facebook application that matches individuals with their friends based on compatibility determined by common sentence structure and vocabulary.

Team Monkey
Palash Agarwal
Allows you to schedule an interview for C, Java, and Python, and conduct it in the browser. You can see the candidate's code in real time, edit, and also chat using audio.

Da Boss
Eugene Kim, Jay Baumstein
Built an HTML5 audio visualizer and leveraged NowJS. They entertained the audience by dancing along to a visualized music file.

Target Practice
Doug Davies, Samantha Dove, Omar Asadi, Will Wheeler
Allows you to take a 2d image and turn it into a 3d space. You upload any image and it allows you to pan left and right in a VR display using a computer mouse. The camera registers x and y coordinates for each dot in an image, which helps determine the forward, backward, and lateral movement in the VR display.

I'm a Bear
Nathan Fair
Allows a user to stay continuously signed into the notoriously spotty AirBears wifi network at Berkeley as long as the AirBears network has a wireless signal. Nathan plans to release it to the iTunes App Store soon, under the name I'm a Bear.

Here is a video of the announcement of the winners.

Steven Schlansker applauded the Hackathon teams and said, "Having gone through this many times myself, I know it's extremely tiring and frustrating to work for 16 hours straight." The judges chimed in and said the CSUA Hackathon teams were "quite impressive" given the short timeframe they were given to complete their hacks. Corey Reese said, "We had fewer teams this year but the caliber of the teams that presented was really impressive."

Let's all hope for the technology community's sake that the CSUA Hackathon will be even bigger and better next year.