There's nothing quite like the discussion of school uniforms to get HuffPost Style editors all riled up. The need -- or lack there of -- sparked a major debate on our team. Below, two fashion editors sound-off on whether or not they think uniforms are a good idea.

Wearing a uniform to school is why I have a good relationship with my mother. Okay, that might not be the only reason, but it certainly makes the top ten. When I was 14 and insufferable, my mom and I fought about a lot of things -- whether or not it was a good idea to get a dolphin tattooed on my stomach, if Michael Bublé constituted good road trip music (for the record, NO), why it wasn't okay for her to say "funky" etc. But not once did we ever argue about clothing. And thank God for that, because I know there would have been battles.

From the ages of 9 to 17, I wore a tie, kilt and blouse to school every single day, and it was bloody fantastic. If I could get away with wearing the same thing to the office all week and not be judged, I would. Even though I work in fashion, having my outfit predetermined would free up my brain to focus on more important tasks like taking Buzzfeed quizzes entitled "Which Original Beanie Baby Speaks Directly To Your Soul?" (For the record, I got Patti The Platypus).

There are tons of arguments against uniforms, like they limit self-expression, yada, yada, yada... but you know what I was forced to do in high school? Express myself using words. Something I've found somewhat helpful in my career as a writer. And if you're still not buying into the whole knee-socks-and-blazer-thing, let me appeal to your sense of reason. It's a huge time-saver. To illustrate my point, I have compared my morning routine in high school (with uniform), to my routine now (sans uniform):

Now: Hit the snooze button. Hit the snooze button again. Hit the snooze button a third time. Eventually get out of bed for fear of being fired from work. With half-shut eyes, try and figure out what to wear. Give up and instead go brush my teeth. Go back to my closet. Give up again. Grab a banana. Start stressing because I have no clothes. Consider the weather. Try on an outfit. Laugh that I even considered wearing skinny jeans and move onto something with an elastic waist. Eventually just put on what I was wearing yesterday because, let's be honest, who's going to notice? Freak out because now I'm actually really late. Still don't brush my hair. Walk to work.

In summary, having a uniform not only caused me way less stress in the morning, but it also ensured that I was always on time. (Okay, I was actually late a lot, but never because I couldn't decide what to wear). And hey, I can look back at school photos and not cringe at what I was wearing. (Okay, I still cringe, but that was because there was a long period of time when thought hair gel and "The Rachel" were a good idea).

Against Uniforms by Jamie Feldman

Like so many others, the time right before high school was a pretty interesting time for me. I got my nose pierced, went on a no-shower kick and swore by socks and sandals (a trend I had no idea would resurface so many years later). My new attitude toward style (and apparently hygiene) was largely a result of the fact that I had been accepted into a performing arts school, a lifelong dream come true. 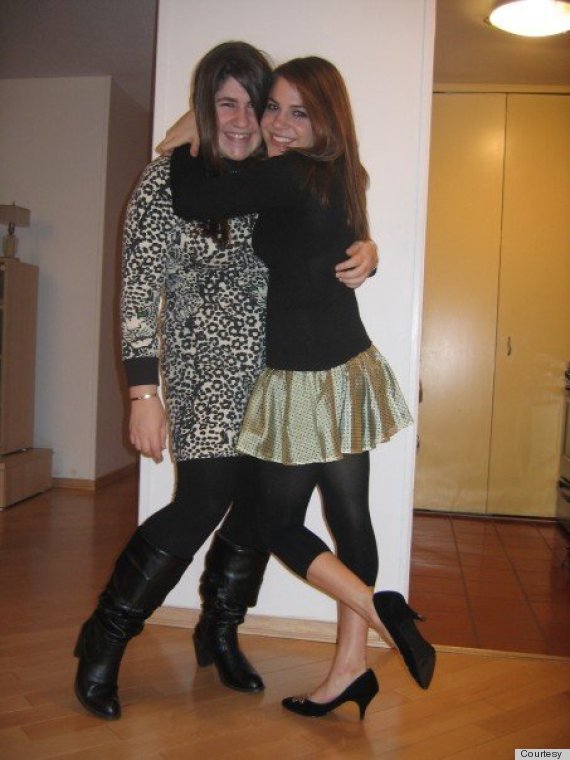 When I walked through the doors on that very first day freshman year, one thing struck me immediately -- the unique way everyone expressed themselves through their own personal style. Whether it was green hair, huge platforms or in my case, a shiny stud in my nose, no one gave anyone else a second glance over what they were wearing. I felt instantly at home. It seemed that for the first time, I was in a place where I could truly express myself.

Of course, coming into my own personal style took some trial and error. There was a period of time where I would match my T-shirts to my stockings. And even though I consider those times to be pretty dark fashion-wise, they still played a part in the evolution of my style (not to mention gave me some embarrassing photos to look back on today). My formative years would have been totally different had I not been given the chance to evolve through my attire each day.

Let's also not forget what teenagers are like. Specifically, teenagers who are also artists and were raised in New York City. Uniforms would have not only never worked in my school, I'm going to go ahead and guess that they would have created more problems than solutions. Clothing allowed us to be inspired by one another, to understand and even admire each other.

I understand the benefits of uniforms in schools. But teenagers are angst-y enough without having to also be restricted in their clothing choices, and I will be forever grateful that I got to make so many sartorial mistakes throughout those years.

Now you've been given both sides of the argument, you can decide for yourself. Are you pro a stress-free morning and saving your relationship with your mother? Or do you too think you should have the right to match your T-shirts to your stockings if you so choose? Sound off in the comments below.